A 'Walker on the Wild Side

Posted in Latest Developments on July 1, 2011

Magic 2012 is the first Magic set that I had the privilege of being the lead developer for. I am very proud of it, and it is exciting to see it start to take baby steps into the world.

I was not, however, working alone. Let me introduce my team.

That would be me. Magic 2012 was my first set lead, although it's by no means my first product. I made every intro pack from Alara Reborn to Magic 2011, I led Masters Edition III, Masters Edition IV, and Archenemy, and I also made the last two iterations of the sample decks that we give out at conventions and at stores. Doing a real set is a much bigger project, though, both in size and importance. I couldn't have done it without all of these fine gentlemen.

Kelly is the editor of this very website, and makes me look good in print every week. Although he's been on several design teams, including Worldwake and Archenemy, this was Kelly's first development team. With that in mind, Kelly did a fantastic job. His effect on the set was mostly felt on a card-by-card basis, and some of my favorite specific inclusions in the set are his. Thran Golem was his hilarious contribution to the set's mild Aura subtheme, and several cards from his "list of cards I don't own enough of for my Commander decks" ended up in the file as well.

Kelly is an avid drafter and casual player with strong opinions about Magic that don't always match up with what Magic R&D thinks. I look forward to seeing Kelly grow as a developer, and I hope to lead a project with him on the team again.

Most of you probably don't know Peter, and I'd say that's a shame. He's an experienced game developer who put in several years of work on Dungeons and Dragons. I once had the privilege of being part of a short-lived D&D product team he led, and I learned a lot from him in that short period of time. We always look for opportunities to involve people outside Magic R&D in products, and at the time we built the Magic 2012 team we were looking for ways to cross-pollinate between Magic and D&D. I knew Peter had well-honed baseline fantasy instincts, and I already wanted to work with him again. I was excited to get my wish here.

Peter ended up leaving Wizards to pursue his own projects partway through the development process. By the time he departed, though, he had left a mark on the set that I can still see. Lots of cards were changed, kicked out, or added based on his opinions about flavor matches or mismatches. I wish him the best of fortune in the future, but my guess is he's good enough that he won't need it.

Steve is a grizzled, long-term playtester who has been a part of Magic for a very long time. Although he is technically a Duel Masters developer, he is an integral part of our Future Future League playtesting, tirelessly exploring the scary edges of what Magic cards can do. He's caught all kinds of dangerous things before they made it out the door, and I expect him to do so in the future. His work on Duel Masters means he consistently looks at sets differently than the rest of us, and the things he catches are often not on anyone else's radar.

Although Steve's expertise often shapes Magic sets card by card, this time I had the benefit of his perspective applied to everything in the set. Whether it was the overall speed of the format, the implementation of bloodthirst, or one individual card, Steve was always ready with an opinion I didn't expect, and kept me looking at the set with fresh eyes through the entire process.

Pro Tour Hall of Famer Mike Turian was the most experienced developer on my team, having led Future Sight, Morningtide, Conflux, Worldwake, and Scars of Mirrodin. Mike and I have rather different natural approaches to the card side of development, but his expertise was invaluable to me on the process side. What should I worry about in week one? When should I start drafting instead of playing Sealed Deck? How much should I push back on the designer? These are questions that no one else on my team could answer, and I am glad to have had Mike's help.

Mike began to move into a new role in Organized Play partway through development, which meant he didn't have as much time for Magic 2012. He reappeared at the end of the process to help us tune the set for high-level drafting, but until then I wanted another experienced developer on the team. Luckily, someone had just arrived who fit the bill perfectly.

Dave Humpherys joined Magic R&D as the Development Manager just as Mike was moving out. As both a Pro Tour Hall of Famer and a very experienced trading card game developer, he was an ideal replacement.

Dave was still finding his Magic feet somewhat during Magic 2012, so his mark on the set is not as large as it will be on future sets. However, I was once again glad to have someone experienced with process to guide me. You'll hear much more from Dave in the future, and you should look forward to when that happens.

A Walk in the Woods

Well-made finished Magic sets have a sort of beautiful crystalline structure to them. Every card makes sense in context with the other cards, the whole picture makes sense, and one could easily wonder how the set could be any other way. 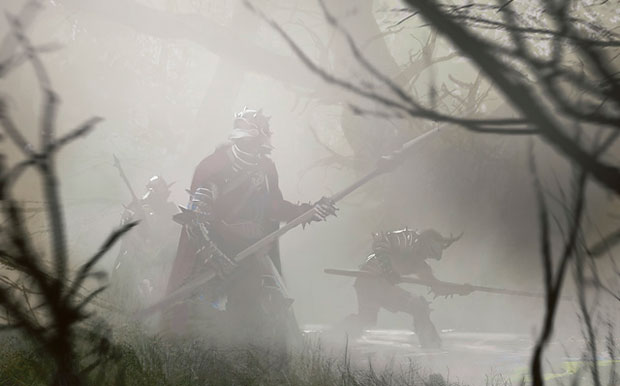 Design handoffs look nothing like that, and often are significantly different than the finished project. This is by no means a knock on design. Making Magic sets is hard, and there wouldn't be so many people doing it together if you could do it with just five people in six months. Magic 2012 was no exception. For example, the design handoff for Magic 2012 had five all-new planeswalker cards in it. The finished set has only three. What happened?

The design vision was that Magic 2012's hook would be the five new planeswalkers. While this is an excellent hook, I decided that this was not a good plan for three reasons.

Second, although planeswalkers are the face of Magic, they are also very powerful in Standard. They are often repeatable card-advantage machines, the tools to deal with them aren't always obvious, and being behind on board against a planeswalker that is running away with the game is not particularly fun. A while ago, we had a conversation about how many planeswalkers we wanted to have in Standard at one time. The five-new-planeswalker plan would push the number of planeswalkers above our acceptable limit for three months, and I didn't think that was worth it. 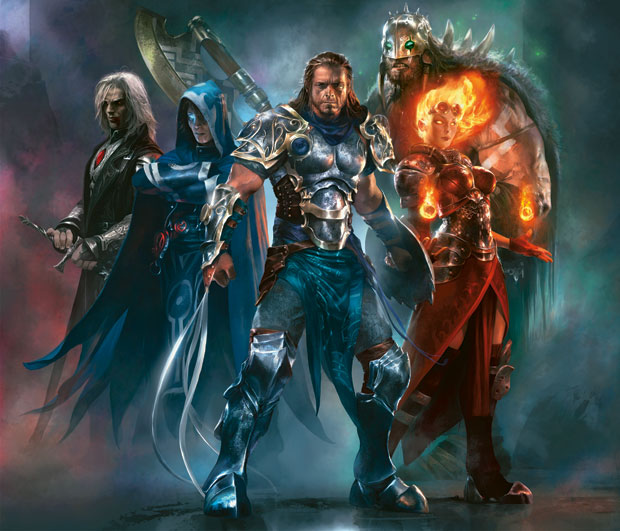 The third reason was that this plan would put those who had to make the next core set in a very awkward position. In short, we needed a plan for the year-over-year continuity from core set to core set, and the five-new-planeswalker plan would shoot any such plan in the foot. I'll talk more about this in a future article.

While the Magic 2012 design team had given us five new planeswalkers, not all of them were perfect designs. Two of them were totally awesome, and I basically wanted to print them as is. One of them was all right. Two of them were pretty rough, and although I could see the effort behind them, they weren't cards I was interested in making. Before you start getting down on the design team, though, let me say that this was by far the best set of planeswalkers I've ever seen a design team hand off. Lead designer Mark Globus knew that the planeswalkers were important to him, and spent a lot of his team's time on them. The fact that I had two excellent designs and one pretty good design to work with was a rare privilege.

Although I didn't want five new planeswalker cards, we could still do five new-to-the-core-set cards. I went looking for reprints that were already in Standard. Once I had decided that black and white were the colors in which I wanted new-to-core-set reprints, things fell into place. Sorin was the only black option, and is a pretty cool dude on his own merit, so he went in. Gideon was a natural choice for the white one, in part because he was the star of a video that was being worked on in parallel with the set. 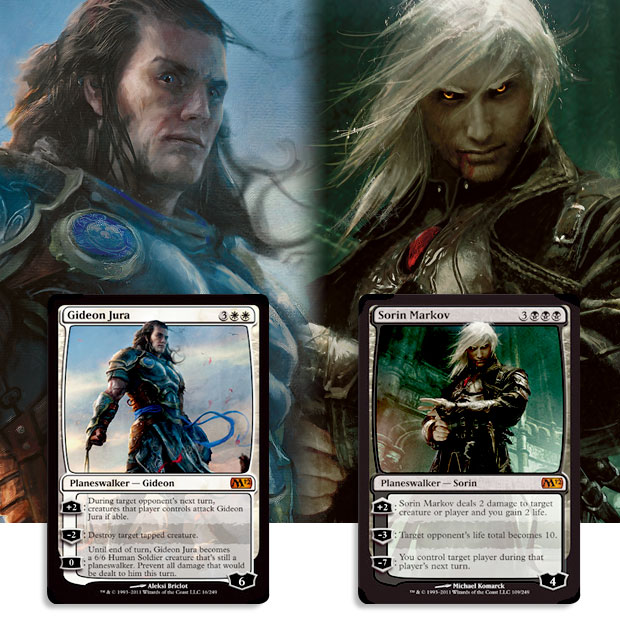 Why did I choose black and white for the reprints? Because the other three were the new ones that I liked.

Jace was the most challenging of the three new cards to make. At the design handoff, that was the card I described as "all right" above. That slot went through many iterations, even going through a brief period of time as a reprint of Jace, the Mind Sculptor. (I'm glad I didn't do that.) I ended up using our internal hole-filling process to generate a huge list of abilities, then built a card using some of our favorites from that process. The middle ability is all mine, though, as I felt that it was pretty strange for a mind mage to not have a card that went after libraries. Here's the final version of the card. 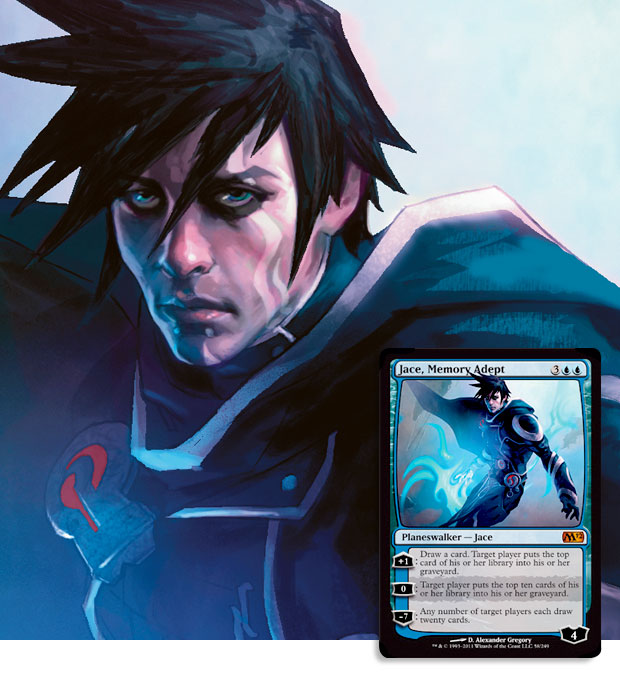 The first of the two cards that Mark Globus and his team nailed is Chandra, the Firebrand. The middle ability was there from the very beginning, and is very fun. The first ability came from my team; the designers hesitated to use an ability that was so close to Chandra Nalaar's, but we thought that upgrading it both met expectations and would make players happy. I'm also happy that the card has only a single

in the cost, as that greatly opens up your options for what spells you might want to use her to copy. 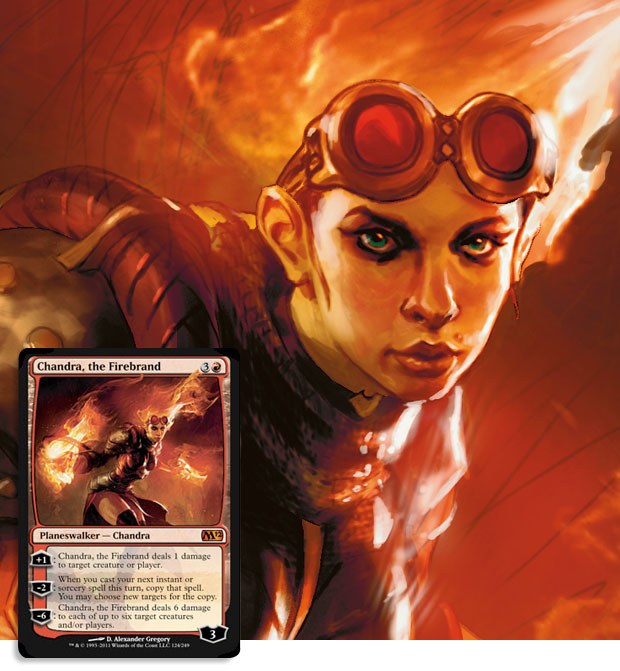 All we have left now is green, and it's a doozy. The Garruk that design handed off was easily my favorite card in the set, and it was also the unambiguous champion of both of our internal rare polls. Why was it so loved?

Garruk has gotten better at making beasts. Of course, he also learned some new tricks in development, where we taught him how to draw you lots of cards.

We also taught him how to make even bigger things than Beasts. 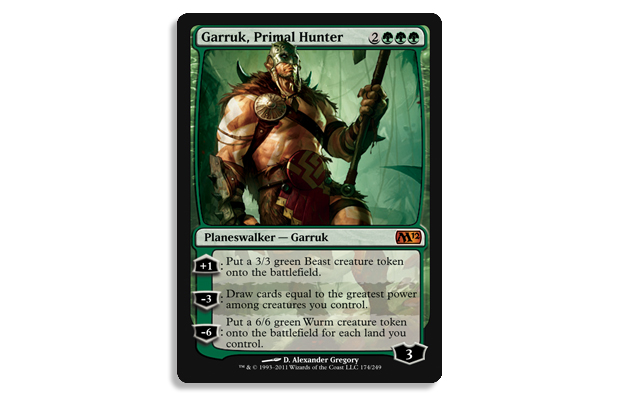 The process of making the Magic 2012 planeswalkers was neither straightforward nor easy, but I think it was worth it. I hope you enjoy meeting them a week from tomorrow at the Prerelease.

Posted in Latest Developments on July 1, 2011