Welcome to the Future Future

Posted in Latest Developments on March 5, 2010

agic R&D is a fun place to work. Although we do many of the mundane things that one might do in any company, we also get to do things like play Magic while we're on the clock. We spend some of that time playing Limited with new sets, and the rest of the time playing Constructed—usually Standard—as it will be when the newest set we are working on is released. We call that Constructed playtesting the "Future Future League," and internally we have shortened that to "FFL."

Decks we build for the Future Future League have many different purposes. The most obvious purpose is to test for power level, and that is much of what we do. However, not everything we do is that rigorous. It is not realistic to expect that all 145 cards in Worldwake will become Standard tournament staples, so in order to get the full picture of a Magic set, we often build decks with other purposes. Perhaps we have one specific question we want to answer, or maybe a mechanic or a pair of cards randomly struck us as interesting enough to build a deck around. No matter what the purpose of a deck, however, playing it against other people's FFL decks teaches us something about the cards that are on their way toward release. Today, I'll tell you about some FFL decks we made while Worldwake was the newest set in our format.

Late last year, deckbuilder Brian Kowal won a tournament whose prize was a free berth on the second Magic Cruise with a new red-white Standard deck of his own design. That deck became known to the world as Boat Brew, earning its name from the boat that it allowed its designer to be on. Similar decks made it all the way to the Top 8 of Pro Tour Kyoto four months later in the hands of Akimasa Yamamoto and Jan Ruess.


We like it when formats change over time; Magic is more fun when the decks that win six months ago aren't the same decks that are winning today. In order to keep watch on how much formats are changing, we often try to build decks that are powerful in the real world with the cards that are available to us in the Future Future League.

Peter Knudson was an intern in Magic R&D when Pro Tour–Kyoto took place. He saw that many pieces of the Boat Brew deck were still available to him, and that many cards that were no longer in Standard had reasonable replacements. Ajani Vengeant, Siege-Gang Commander, Ranger of Eos, and Knight of the White Orchid is still around. Everflowing Chalice is a lot like Mind Stone. Conqueror's Pledge and Marshall's Anthem are both a little bit like Reveillark. Dragonmaster Outcast costs one mana and is a fine thing to get with a Ranger of Eos. Peter built the following deck to see how strong a red-white midrange deck built on the same skeleton was in the FFL.

4 Knight of the White Orchid


After some games with this deck, Peter concluded that the deck was much less powerful with Worldwake than it was in current Standard at the time. Although Dragonmaster Outcast was strong in the late game, finding two of them with Ranger of Eos was not enough of a threat early in the game when compared to Figure of Destiny.

We also learned about Everflowing Chalice from this deck. Marshal's Anthem and Conqueror's Pledge are reasonable cards even when they are not kicked, and we were willing to play both of them without tons of extra mana. However, Everflowing Chalice would sometimes give Peter a ton of extra mana, which would allow him to get massive upside out of both of his kicker cards. We all copied Peter by playing Everflowing Chalice with other kicker and multikicker cards. The one that tickled my fancy for this purpose the most was Rite of Replication, but I never got around to actually building that deck. I was very excited to discover that Magic Online Zendikar Block Constructed players were doing that!

Magic developer Erik Lauer is a logical sort of fellow. He is a formidable deckbuilder; he built Pro Tour winning decks before he came to Wizards, and it's not unusual for him to build FFL decks that are only a few cards off of decks that dominate real world formats. However, like the rest of us, he builds decks for other reasons too.

Early in Worldwake development, for example, Erik decided that he wanted to better understand the pair of multikicker

spells. Both of these spells work best when you have lots of extra mana in your deck, and the best mana generation engine Erik found was Elvish Archdruid. That, combined with the pleasing synergy between Joraga Warcaller and Strength of the Tajuru, pulled Erik toward making an elf deck.


There are a few things going on here that all but ensure that this is not a powerful tournament deck. One is Arbor Elves with only 11 Forests. Another is the lack of Bloodbraid Elf in a red-green Elf deck, although this is necessary when he has already decided to run eight

spells that do nothing when a Bloodbraid Elf hits them. However, the deck showed Erik exactly what he needed to know. He reported that Strength of the Tajuru was a swingy and sometimes powerful card, but that it didn't always work out well when his creatures came under attack from early removal spells. He also concluded that Comet Storm was crushing against other creature decks. However, he reported mild mana problems, and suggested that the card might be stronger when it wasn't being mashed into a deck that used green mana acceleration.

Ken Nagle is famous inside Magic R&D for his love of griefing, both inside and outside games. He was also the lead designer of Worldwake, which led him to be quite active in the FFL during his set's development. One particular thing in Worldwake, however, scratched his griefer itch, and that was the Trap mechanic. The potential to make an opponent feel bad for having done something is exactly what Ken looked for out of a card, and the Trap mechanic had that potential in very high quantities. Even better, playing around one trap often exposed an opponent to a different Trap—and if Ken had a Trapmaker's Snare in hand, often there was no way to avoid falling into a trap at all.

Magic designers and developers are also Magic players, and one of the most important tests for whether a Magic mechanic is fun or not is whether or not we enjoy playing with it. Because of this, we are more than willing to just build random decks that look fun to us. When we do that, we hope to discover that we were right, and that we did actually have fun playing. We played Zendikar / Worldwake Block Constructed for a short while near the end of Worldwake's development, and the following is the Trap deck that Ken had a ball playing during that time.


Trapmaker's Snare is a difficult card to play around. I got to a point where I learned how to play around most of Ken's Traps with my black-green-white landfall deck, but it took me a little practice. The biggest takeaway from this deck, however, was just how awesome Jace, the Mind Sculptor is. Jace's "Brainstorm" ability is at its best in a deck that has plenty of ways to shuffle its library, as this allows one to make two undesirable cards disappear in exchange for newer and better cards. Ken's deck here has eight fetch lands and four Trapmaker's Snares, which is a significant amount of shuffling. Although this deck itself wasn't adopted by the rest of us, it caused an uptick in the amount of Jace, the Mind Sculptor we were playing!

The last deck I'll tell you about today is a hilarious experiment brought to you by Peter Knudson. Peter is an aficionado of Magic's Legacy format, and the "43 land" deck that runs on Exploration and Manabond was just beginning to hit the mainstream while we worked on Worldwake. The Legacy version is full of awesome lands from across Magic's history, such as Maze of Ith, The Tabernacle at Pendrell Vale, Rishadan Port, and others. However, it often wins the game with Mishra's Factory, which reminded Peter of Worldwake's dual-color creature lands. Peter built the following deck to try to recapture that magic.


In the end, this deck didn't quite work out. Oracle of Mul Daya, after all, is no Exploration or Manabond. As always, however, this deck taught us a few things. The first was that we had delivered on the promise of a land block, since Peter was interested enough in the set's lands to build an entire deck around them. The other was that Treasure Hunt was pretty good, and that it was especially good in trick decks like this one that could somehow play an inordinately large number of lands. We spent a little time looking for a dangerous trick deck in Standard and didn't find one. We were confident, though, that such a deck existed in Extended, and that Extended was almost certainly powerful enough to handle it. 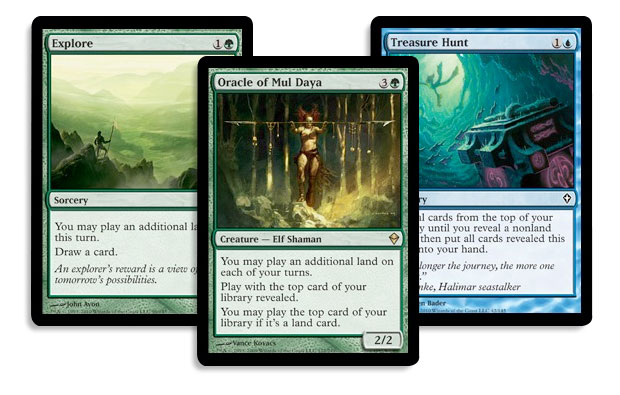 Today, I showed you only four of the many Future Future League decks we made during Worldwake's development. Although each of these decks was built with the goal of answering a question or experiencing a mechanic, they helped us build a larger picture of the environment as well. The biggest question we have to answer every three months is whether or not we're having fun. When we are having a blast, we can release a set with the confidence that you'll have fun too!

Posted in Latest Developments on March 5, 2010