Posted in Latest Developments on September 16, 2011 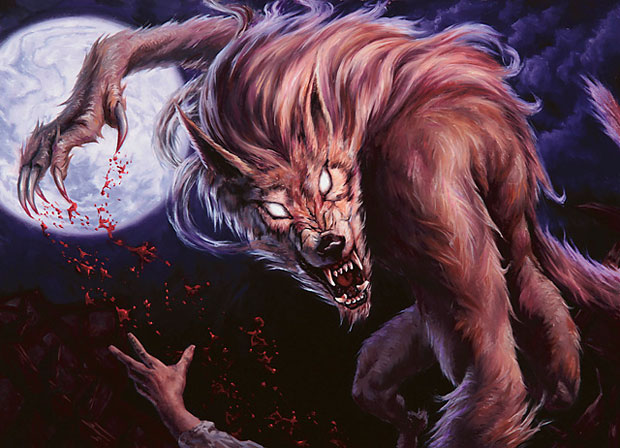 ...oh, okay. You just want a development article. I can do that. I have a preview card right here. Well, you can't see it yet, but trust me, it's here.

One of the big twists in Innistrad is the double-faced cards.

One of the things we do to ensure a little bit of continuity between design and development is have one person per set be on both teams. For Innistrad, I was that person. This put me in a strange place for a couple reasons.

First, I was the one who first floated the idea of double-faced cards to Mark. I was on the Duel Masters design team that created that game's first double-faced cards—now known to the world as psychic creatures—so when Mark started talking about mechanics that could communicate transformation, I suggested that we investigate doing the same thing. 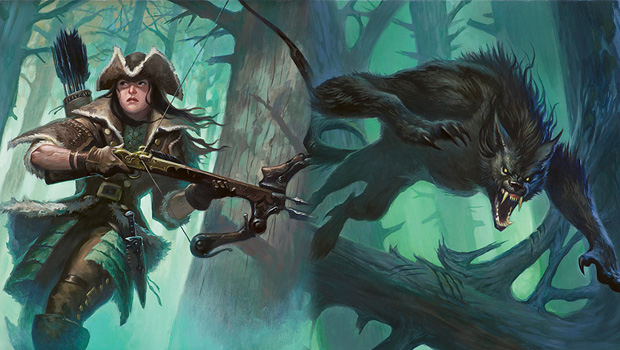 This was a new role for me, as development is supposed to be the sane half of the process that creates Magic cards. That has caused some players to ask me why we didn't just turn the double-faced cards into Kamigawa-style flip cards, as obviously we're supposed to stop those crazy designers from pulling stunts like this. While there are many things about the Kamigawa block that I have grown to appreciate over time, the flip cards are not among them. Here are a few problems with them:

While developers are the gatekeepers who control the final numbers on a set, we are also responsible for making the set appealing and awesome. It became obvious that for all the issues that double-faced cards raised, they did an excellent job of communicating transformation. They were the thing that would make the set most awesome, and we would have been crazy to cut them. Therefore, when we got the file, we started solving problems.

The beginning of the process of solving problems, however, is identifying problems, which brings me to the second reason that I found Innistrad development to be a new challenge. When the development team came in, they saw all kinds of problems that they wanted to attack. While I was glad the set had their attention, I was also attached to several of the very things that they thought were problems, and it was my job to defend them until they had received a fair chance to live.

One of those things that I had to defend early on in Innistrad development was the "Werewolf mechanic," which was exactly what you see on printed cards when the set was handed from design to development.

While it is not a named mechanic in the same way that morbid and flashback are, it is very important to the structure of the set. We wanted the Werewolves to transform in a way that made some kind of flavor sense. Our efforts at getting a day and night mechanic to work were not particularly successful, but we found that as long as the mechanic had all of the Werewolves transforming the same direction at the same time, we didn't have any major flavor disconnects.

It was also important that players have some amount of control over when the transformation takes place. As much as werewolves might feel like runaway freight trains of destruction in the movies, we have found that putting players on long-term rails inside of a game of Magic is not ideal. We also wanted the mechanic to be fun to play with.

It took some effort before we found our way to the Werewolf mechanic that we printed, but we were satisfied with it through all of design and didn't have an alternative that was anywhere near as good. That meant I had to protect it from the other developers until they had time to get comfortable with it. My defense of the mechanic was pretty simple: after playtesting with the mechanic a bunch, we handed it off as part of the file. We like it, you should trust that we wouldn't have handed it off if we didn't, and you should play with it before you make a decision. So they did. 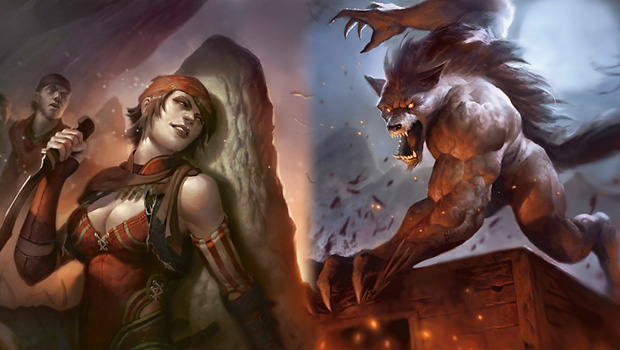 Playtests during development are usually more competitive than those held during design, and they revealed some emergent qualities of the Werewolf mechanic that I had not previously noticed. One was that the meta-experience of the mechanic gave the right pacing for the horror genre. The big reveal of a movie's namesake monster never happens right after a flurry of activity. There's always a slow buildup, usually with ominous music and slow camera work to build tension. The spell-free turn that precedes a Werewolf transformation conveys that to me in a pleasing way. The other thing I liked was that in some games, I would ration my spells to one per turn in order to keep opposing Werewolves from transforming. That also built tension, as I wondered to myself if I would be able to keep the stream of spells flowing. Sometimes I could, but other times I wouldn't, and in those times the enemy Werewolf transformation once again felt like it was the payoff of a dramatic buildup. From a game pacing standpoint, that's just about ideal.

After initial playtesting, the development team decided to go with the Werewolf mechanic as handed off. However, we also discovered some problems. The biggest one is that taking a turn off to transform your own Werewolf was a very large cost. In Magic 2012, for example, the format was made to be quite fast. It ended up even faster than I thought it would, and we had competitive players doing things like taking Incinerate over Volcanic Dragon in Draft because turn six was so far in the distance that they would rather have the removal spell. In that world, taking a turn off from casting spells is liable to get you killed. We couldn't let that be the case in Innistrad.

Erik noticed this right away, and decreed that Innistrad Limited would be significantly slower than Magic 2012. While there are cards in the set that support very aggressive strategies, those strategies are the exception rather than the rule. The Werewolves needed time to breathe, players needed time to get enough mana to pay expensive flashback costs, and horror movies need time to build up to their exciting parts. It was also nice, as previously mentioned, to provide a contrast to Magic 2012's speed.

We kept our desired speed in mind through our early work on the set, and slowed things down. However, this also had some unintended consequences. When every deck slows down, and the rate of spells per turn in the early turns goes down accordingly, Werewolves with low mana costs start drooling uncontrollably in excitement. Did you cast a Werewolf on turn two? If so, it's almost certainly transforming very soon. Is the Werewolf side a powerful bruiser of a creature? If so, you get to beat the crap out of your opponent with it. Slowing down the format without changing the Werewolves created a world in which there wasn't a lot of good early Werewolf defense.

Magic coverage reporter Bill Stark was doing some in-house editing work when we were at this point in Innistrad development, and he found his way into a playtest when this problem was at its most extreme. The feedback he gave us on the Werewolves was quite negative, but he wasn't angry about needing to deal with a double-faced card or frustrated with the specific mechanic. He was just mad that he couldn't stop his opponents' Werewolves from transforming and crushing him on turn five, which we thought was a fair complaint.

While Bill's bad experience was unfortunate, it did get us to change some cards, so I'd say it was worth it in the end. In fact, today's preview card was one of the cards that changed that day.

You're probably wondering what changed on this card, as it still may look to you like a very aggressive card. You'd be right; it is. The design team made this card as an exercise in figuring out how good a creature a one-mana 1/1 Human Werewolf could turn into and have things still be fair. We guessed 3/1; in development, Erik decided that it could be a 3/2. While the card looks quite strong—and is strong enough that I expect to see it in Constructed decks in some format or another—it survived our Future Future League playtesting with flying colors. We think it's both fun and fair. 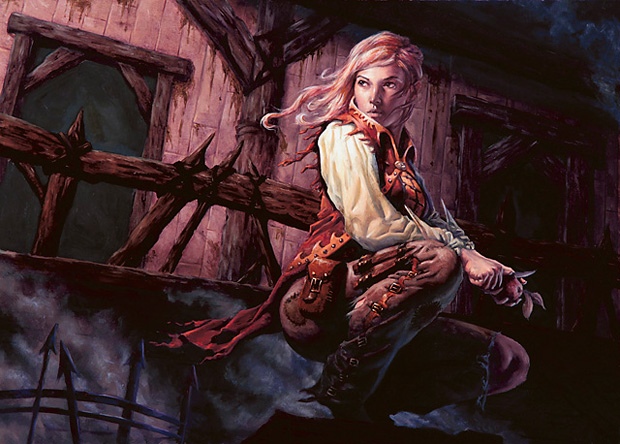 Back to Innistrad Limited. How did we change this card to make Limited work? That's actually a trick question. The only thing that changed on this card was the rarity symbol. In that playtest, this card was a common, so Bill found himself facing down a one-mana 3/2 creature a few too many times, which caused the reaction that he had. Instead of cards like this, we made our common Werewolves look less like that and more like this:

While this card has no compunctions about beating you up—7/7 is huge, and there are very few commons that can deal singlehandedly with Krallenhorde Wantons—you'll have a little time to deal with this before it starts hitting you for massive damage. In the end, we felt that this made the set much more fun to draft and play Sealed Deck with.

Speaking of Draft, I have one final note before I sign off. We've decided to make a small change to the rules we announced for drafting with double-faced cards. When you pick a double-faced card, you will be required to place the card on top of your pile of other cards, and you will not be allowed to conceal it in any way until you pick your next card. While this will reveal information to other players, it also removes the need to worry about the manual dexterity required to hide a card quickly after taking it. Now, you will simply need to take into account the information you will be providing before picking a double-faced card.

As a side note, some of you have expressed worry about the danger of providing information to your neighbors about what you're drafting. I have found that early in the draft, that information being public is actually beneficial to me. If I open a Garruk Relentless, it's going to take a lot to get me to not play it, so I don't mind showing everyone what I have. If that keeps the people around me out of green, so much the better!

This has been the last day of Innistrad preview weeks. Come back this coming Monday, and we'll show you the whole set. Next weekend is the Prerelease, and I hope you'll all go!

Posted in Latest Developments on September 16, 2011