Posted in Latest Developments on October 14, 2011

long time ago, Mark Rosewater wrote a column titled When Cards Go Bad about why "bad cards" exist. While I agree with many of the things he said, he approached the problem from a design perspective.

I've been itching to write my own version of his article for a few months. Here are some reasons that developers make cards "bad."

Some cards aren't fun when they're good.

Have you ever been part of a game in which this card resolved? What happened?

In a two-player game, you probably flipped a lot of coins, and then whatever board state existed before the card was cast was completely ruined. In a multiplayer game, you probably had to use dice, and there were likely a lot more permanents changing hands. In my experience, this card is a novelty the first time, but its welcome wears out quickly, as the act of resolving it is complicated and it invalidates all the work everyone put into the game before it resolved.

You might, then, be wondering why the card exists at all. 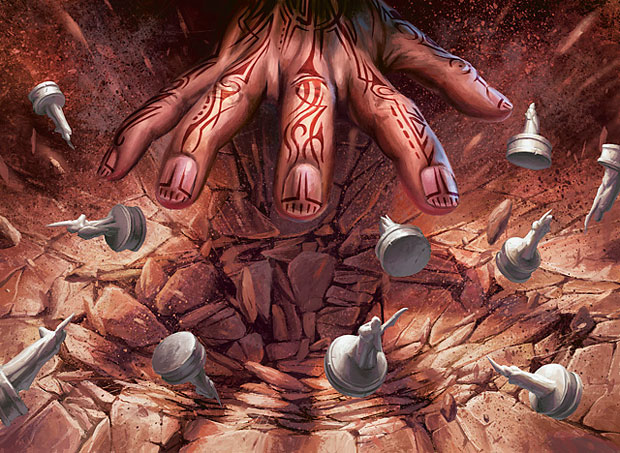 Let me tell you about Nick Fang. Nick is a Magic judge who often serves as the scorekeeper at Pro Tours. Some of Nick's favorite cards are red chaos-inducing cards in the vein of Confusion in the Ranks, Wild Evocation, and Warp World. Whenever I go to Pro Tours, Nick reminds me how much he likes those cards, and that we don't normally make very many of them. Nick's friendly reminders were on my mind while I was working on Magic 2012, especially because Scars of Mirrodin block didn't have any big and random red cards to speak of. I made Scrambleverse to fill that need. 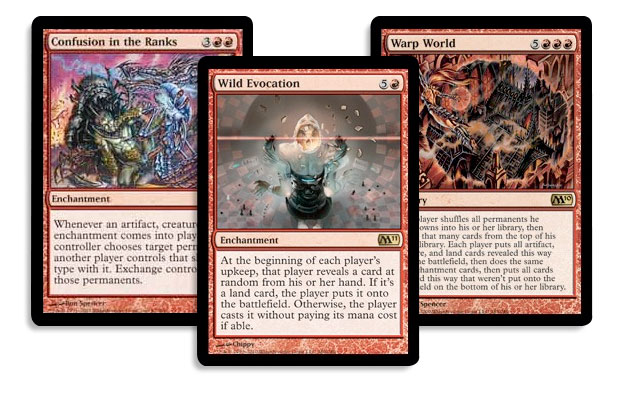 While on the surface I made Scrambleverse for Nick Fang, that's not what's actually going on here. Nick is not the only Magic player out there who likes big and random effects, as the Gatherer rate-and-discuss page for Scrambleverse demonstrates. We need to make cards to serve that audience every once in a while. However, a world in which a deck with four Scrambleverses wins a Pro Tour would be a terrible one indeed, as most players don't enjoy doing that sort of thing more than once every very long time. In order to give Scrambleverse to the people who need it but keep it from annoying people who want to avoid it, we just make the card cost so much mana that only the people who really want to play with it will bother to.

Random red effects are not the only cards that we do this with. Cards like Painful Quandary that enable griefing and cards like Shared Fate that take an otherwise perfectly normal game and make it weirder both have their audiences, but can annoy the majority of Magic players if they become powerful. Our job is to make Magic the most fun for everyone, and we've found that we reach the best balance when cards like Scrambleverse, Painful Quandary, and Shared Fate exist, but have a low enough power level that most players don't want to play with them.

Limited needs to be balanced.

Most Magic players experience Magic on a card-by-card basis. While we understand that and do our best to make sure that cards make sense individually, Magic developers need to think about the larger picture. Limited is important to Magic; lots of people have their first interactions with a Magic set at a Sealed Deck event at a Prerelease, and as long as Magic Online is up, there will be people drafting twenty-four hours a day. All that Limited play needs to remain fun over time, and to achieve that, we would like the power levels of each color in each format to be balanced. 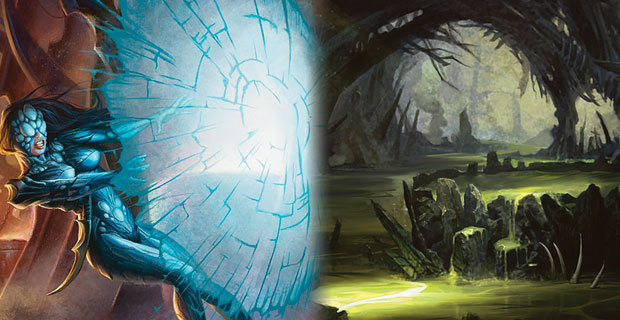 This often leads to some conversations in meetings that would look strange to outsiders. We had several of these during New Phyrexia development. In particular, there was a meeting when both blue and black were doing much better than we wanted in our playtests. Lead developer Aaron Forsythe decreed that we needed a weak blue card and a weak black card. None of us came up with a blue card that was weak enough, so Aaron created Defensive Stance to fill the hole. While I have seen Defensive Stance sideboarded in against Plague Stingers and Blighted Agents, it is hardly a Limited all-star. That same meeting also resulted in Evil Presence entering the set. While Evil Presence was important in Masters Edition III for dealing with certain legendary lands, in New Phyrexia it is merely a weak black card with a flavorful name that we put in to balance the colors.

I wouldn't be surprised if you drafted full Scars of Mirrodin block several times without having played either Evil Presence or Defensive Stance, but I guarantee that those cards being the right power level for the set contributed to the fun you had.

Draft needs to be human-processable.

From a game design perspective, the most potentially confusion-inducing point in a booster draft is the moment you open your first pack. At that moment, you're looking at a fresh collection of fourteen or fifteen cards, and you don't have anything in your pile already to guide you. We include cards of varying power levels in the pack so that this moment is a little bit easier to deal with.

Oddly, this is the opposite of many people's instincts about what makes for good Limited game play. Why, they ask, isn't every card almost equally playable? Wouldn't that be more balanced?

It might be a little bit more balanced, but that balance would come with significant costs. I have more experience than most playing Limited with flat power curves. Before I came to Wizards, I spent lots of time playing Cube Draft, a format very similar to Booster Draft in which the booster packs are replaced with a different set of cards preselected by the host. Usually, the selection of cards doesn't include any "bad cards," because who wants to play with those? Because of how often I used to draft Cubes, my Cube card evaluation skills are pretty sharp. However, due to the absence of the bad cards, the card power levels are much closer together than they are in a normal draft.

To illustrate this, here is a pack I just pulled from my Cube.

When most drafters I know open their first pack, the first thing they do is narrow down to a few cards they might be willing to first pick. On your first pass, how many of these cards seem first-pickable to you? 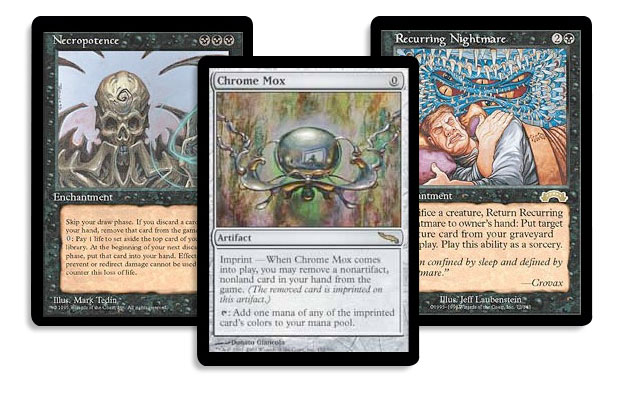 Now, a second question. Which of these fifteen cards occurred to you as "bad cards" in context, if any? My "bad cards" in this pack are Slagstorm, Whipcorder, Pristine Angel, Phantom Centaur, and Woolly Thoctar. I've played all of them in Cube decks before, but none of them are powerful enough to draw me into drafting a deck around them. Despite that, all five have been historically proven as reasonable Constructed cards! This is exactly the kind of card evaluation puzzle that bewilders most people during their first few Cube drafts.

Drafting is a complex enough task already without every card being extremely close together in power, so we include plenty of cards of widely differing power levels so that the right answer can be a little bit less ambiguous. This doesn't simplify the task of correctly identifying those power levels—a challenging task in itself!—but it does make deciding between correctly-identified power levels a little bit easier.

As a side note, I was not much of a believer in this idea until early Zendikar development. One of the main problems with the Zendikar design handoff was how flat the power levels of the cards were. Most cards were very close to one another in power, so the only way you could get an edge was to draft a highly synergistic deck. One of the first things that Zendikar lead developer Henry Stern did to the set once he got his hands on it was de-flatten the power curve by adding one common to each color that you would be unambiguously happy to open and first pick. That made a big difference in lowering the stress level of the beginning of a Zendikar draft, and I've been a believer ever since.

Finally, we get to my favorite answer. Often, when a card is previewed, people will post comments like "This should cost one less mana" or "needs trample" or some such. Often, those comments will be about cards that are the way they are for reasons previously enumerated in Mark Rosewater's article or this one, but occasionally, those comments are simply off base. The card is just fine and will have its day in the sun eventually. In these cases, there will inevitably be a moment of discovery when the card turns out to be powerful enough anyway. 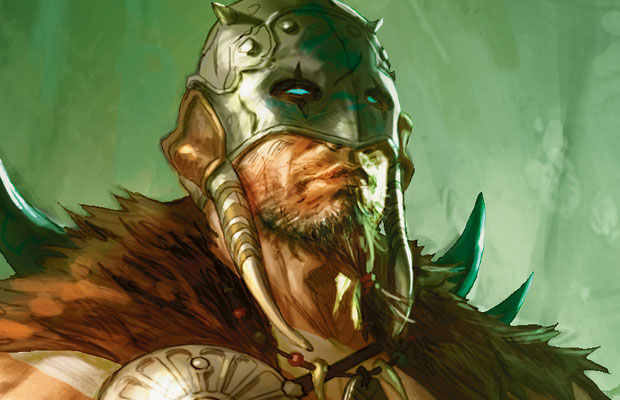 One such moment happened last weekend with the Wolf Run Ramp deck that Brian Sondag used to win the Star City Games Standard Open in Nashville.


I had a lot of people complain to me that Garruk, Primal Hunter was too weak to play in Constructed when it was previewed. My internal experience suggested that this was not the case once Innistrad rotated in, but as always I was open to being wrong. Happily, "big Garruk" is starting to show up. I look forward to seeing more of his work in the future.

We try to design Magic sets so that cards can surprise you over time. If you could get everything right just by looking at individual cards, that wouldn't be much fun. We can't get it right by doing that either, so we have to do a lot of work to figure things out, but we think it's worth it in the end if we get a rich and changing tapestry to explore instead of a quickly solved static puzzle.

In the end, each individual card has to serve the greater good of Magic. Sometimes, that means not being as powerful as other cards. We hope you understand.

Posted in Latest Developments on October 14, 2011