Posted in Latest Developments on July 4, 2008

So with that in mind, let's look at a couple of potential chroma cards:

If you give the

Amrou Seekers the White Glove Treatment, it pumps up to 3/3. If you instead enchant the

Paladin en-Vec, it becomes a 4/4 with pro-red, pro-black, and first strike, like Akroma's scrappy little brother. And if you enchant

Wilt-Leaf Cavaliers, it becomes a 6/7 with vigilance. The effectiveness of the Aura varies dramatically with what you put it on, and this is the kind of chroma card we definitely could have made.

Double (Double) Anthem (Anthem)
2WW
Enchantment
Chroma - Each creature you control with two or more white mana symbols in its mana cost gets +2/+2.

This enchantment offers a larger reward than Glorious Anthem, if you're willing to jump through its hoops. Play multiple mana symbol creatures like the

Calciderm, and you would soon find yourself commanding a 4/4 with first strike and lifelink, a 4/3 with shadow and protection from red, and a 7/7 creature with shroud. White's long history of powerful

2/2 Restless Apparition, and the

Oversoul of Dusk. And we wanted to give larger rewards than the White Glove Treatment or the Double (Double) Anthem (Anthem).

So we made this instead. Click to reveal it.

Restless Apparition, and the

5/5 Oversoul of Dusk in play, facing down your opponent's twin 5/5s. You play Light from Within and attack with your 6/7 vigilance Wilt-Leaf Cavaliers, your 5/5 pumping persist Restless Apparition, and your 10/10 protection from blue, black, and red Oversoul of Dusk. Your opponent's blocking options are not very awesome.

With Light from Within, you want to make sure you have lots of creatures on the board to benefit from its pumping, even in the face of opposing kill spells. Many of Shadowmoor and Eventide's persist creatures are covered in white mana symbols and provide that exact resiliency with persist. Say your team consists of a

2/2 Restless Apparition, and a

5/5 Twilight Shepherd. You play Light from Within and attack with a 5/4, a 5/5, and an 8/8 for 18 damage. Your opponent plays Damnation. You shrug, untap, and swing in for 15 more damage, as calmly as if that's always what you do when you get Damnationed.

A lot of the times you play Light from Within, it feels like an Overrun effect, and you expect it to fade away at end of turn. But the dudes just stay big. When your first few turns are Icatian Javelineers, Soltari Priest, and Wilt-Leaf Cavaliers, your turn four Light from Within is a four-mana spell that deals 6 extra damage. Seems good. But then on your turn five, the Light from Within deals another 6 damage. And when you play your turn-five 10/10 Oversoul of Dusk, the vast power-pumping seems like a freebie. 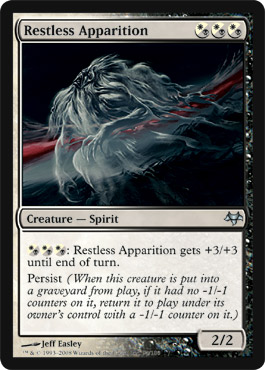 When new people join R&D, it's often hard for them to deal with their favorite cards or mechanics getting pushed off to the future. A developer will often say,

"This new mechanic in this file is a good design, but it's way too similar to the mechanic we just made in the previous set. We don't want to do that kind of mechanic more than once every two years. Let's just move this card off until two years from now."

The new recruit is aghast:

"But the new mechanic is so awesome! If we let it slip away we'll never see it again! We'll never remember this mechanic two years later. We gotta do it now!"

As I move into my sixth year in R&D, I've seen this story play out many times. It turns out that good designs do indeed re-emerge in later design files. And eventually, when the time is right, the best designs eventually get printed. Mark Rosewater famously submitted "2G Mana Flare" to Magic sets for six years in a row before it finally saw print as Heartbeat of Spring in Champions of Kamigawa.

If chroma were proposed for Mirrodin, Kamigawa , Ravnica, Time Spiral, or Lorwyn, the correct answer would be "Not a great fit for the block. Let's push it off a couple of years until the right time." And now with Shadowmoor and Eventide, the right time for chroma is finally here.

The Future of Shadowmoor Cycles

Some of Shadowmoor's most powerful and popular cycles are those with tons of hybrid mana symbols, which sets them up for sick combos with a variety of chroma cards:

The HHHHH Demigods: Godhead of Awe, Ghastlord of Fugue, Demigod of Revenge, Deus of Calamity, and Oversoul of Dusk

Shadowmoor also includes cards with tons of hybrid mana symbols outside of any cycles, like

I'm going to tell you something a little earlier than I'm supposed to by saying that all three of these cycles—the HHH creature, the Lieges, and the HHHHH Demigods—are actually ten-card cycles across Shadowmoor and Eventide and across all ten of the two-color pairs. That is to say, Eventide has five more HHH creatures, five more Lieges, and five more Demigods. But be careful: not all of these cycles in Eventide are exactly like you remember them from Shadowmoor.

These three ten-card cycles provide a huge abundance of colored mana symbols for chroma to play around with. Eventide also includes a lot of individual cards with lots of hybrid mana symbols or lots of monocolored mana symbols outside of any cycles, such as Unmake at common and Thunderblust at rare. You can see both these cards and more on the Eventide minisite.

When I look at these results stacked up, they look a lot like a deck list. All I need to finish it off is 2,710 Wanderwine Hubs and 2,132 Sunken Ruins! I'm tempted to start collecting 1,253 Drowner of Secrets and 682 Summon the Schools to put together a 14,000 card Merfolk decklist, but that would take a whole different article.

Posted in Latest Developments on July 4, 2008