Posted in Latest Developments on January 14, 2005

all thought you were rid of me, but here I am. Aaron is out on vacation, so the weighty responsibility of writing this column has fallen to me. With any luck I'll next be seen writing Building on a Budget, where I'll be talking about the deck Dragon's Gate, which combines Cryptic Gateway from Onslaught with the five dragons from Champions.

But today is not the day for a lengthy introduction.

I know what you're here for, and I know as well as the rest of you that if I don't give up the goods immediately, you'll be scrolling down to find them anyway. So here goes: 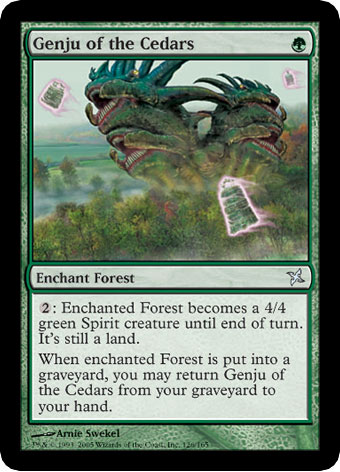 The Genju are a six card cycle in Betrayers of Kamigawa that represent the spirits of the lands coming to life as monstrous creatures. When one of these spirits is killed in battle, it simply relocates to a new land of the appropriate type and proceeds to animate that. And as you can see from the card above, this is no wimpy tree spirit. This is the whole forest, rising up and wiping out everything in its path.

The card was originally given life by Mike Elliott in the following iteration:

Spirit of the Forests
2G
Enchant Land
GG: Enchanted land becomes a 4/4 Spirit with trample until end of turn. If enchanted land leaves play, return a card named CARDNAME from your graveyard to your hand.

Two and a half months later, the other member of the team, Randy Buehler (you may have heard of him) made the card a 5/5 with trample. No more changes were made, and that's how the card looked when it came into the hands of the development team.

That team included Henry Stern, Devin Low, Randy, and myself, with Matt Place later stepping in when Randy realized he didn't have time for the constant meetings. Yes, Betrayers of Kamigawa was my first official Magic team, and I was determined to make the most of the opportunity to help shape a piece of what has long been my favorite game.

We started off with the traditional card-by-card pass through the file, and when we made it to the first Genju, we put them all up on the white board so that we could see the whole cycle. Here they were:

Spirit of the Plains
W
Enchant Land
W: Enchanted land becomes a 0/4 Spirit until end of turn. If enchanted land leaves play, return a card named CARDNAME from your graveyard to your hand.

Spirit of the Islands
1U
Enchant Land
1U: Enchanted land becomes a 2/2 Spirit with flying until end of turn. If enchanted land leaves play, return a card named CARDNAME from your graveyard to your hand.

Spirit of the Swamps
1B
Enchant Land
2B: Enchanted land becomes a 3/3 Spirit with fear until end of turn. If enchanted land leaves play, return a card named CARDNAME from your graveyard to your hand.

Spirit of the Mountains
2R
Enchant Land
1R: Enchanted land becomes a 4/2 Spirit until end of turn. If enchanted land leaves play, return a card named CARDNAME from your graveyard to your hand. 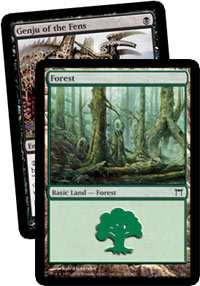 We realized quickly that it bothered us that you could, say, put the Spirit of the Swamps on a Forest and go to town. The flavor just felt wrong, so we changed each of them to only enchant the proper land type.

The next thing we agreed upon was that we liked the mana cost of the White one. A single mana meant that the Genju could easily slip under countermagic, and the fact that they were going to take mana to activate meant that we could still give some powerful stats despite the cheap initial cost (the White one's stats were anything but powerful, but I'll come back to that later). We also decided that the fact that you could only enchant a certain type already gave enough of a color requirement, so we synced up the activation costs at 2 colorless mana.

We then concentrated on the individual cards, looking for the right combination of stats and abilities that would make a coherent, interesting cycle and would also carry the flavor of each individual land. For Genju of the Cedars, trample seemed reasonable, but we eventually decided that the Green one just didn't need an ability. Its "ability" was simply the privilege of being huge, so we removed trample but kept the stats at 5/5.

Our other change was making it trigger off of the land going to the graveyard. This made the template a lot cleaner and also gave players an additional way to deal with them in the form of bounce. This led to the following card:

Spirit of the Forest
G
Enchant Forest
{o2}: Enchanted Forest becomes a 5/5 green Spirit creature until end of turn. It's still a land. When enchanted Forest goes to the graveyard, return CARDNAME from your graveyard to your hand.

Well, as you can see, we came pretty close in that original meeting. The final change came about with the following Multiverse comments:

(Note that, before I worked here, my favorite part of this column was the little excerpts from the Multiverse notes. Perhaps I was alone in that, but since it's most convenient to assume that everyone is like me, I'm going to be abusing my newfound privilege as much as possible.)

The card was proving to be too potent in aggressive green decks. Even without mana acceleration they could “summon” a hasty 5/5 on turn 4 and it wasn't difficult for the deck to keep the Genju coming across for more. Even if you traded with it, it would just return again next turn, and far too often you'd end up being reduced to chump blocking followed closely by death. We reduced the stats to 4/4 and the card is still quite strong, but it now feels a little more fair.

And that's how Genju of the Cedars came to be.

But I promised you a tidbit about the White one.

Heh. As you can see, we sometimes get a little goofy, but Matt Place's comment, coming from when he saw the updated card for the first time (he hadn't yet joined the team), should speak volumes. The card remained unchanged throughout the rest of development, so you can expect something a little spicier than 0/4!

The main thing that struck me about the experience was the amount of thought that goes into each and every change and the sheer number of factors that are considered by the teams here. Trust me when I say that no matter what categories you fall into and what minute or unique things you care about, someone from the team was fighting for your cause at some point. It's easy to think that anyone could put together a card set, but the people here have a lot of experience doing this, and it shows when you watch them work. Even though I didn't always agree with what they had to say (in fact, the arguments in R&D are legendary), I always respected it, and I learned a lot in the process.

I also got a few cards of my own into Betrayers, and while I can't tell you what they are (yet), I can say that I've been ecstatic that my two cards from Champions of Kamigawa have been receiving a lot of attention recently as an alternative to winning drafts by dealing twenty damage. See, not long after I started at Wizards, there was a call for designs for Splice spells, and I submitted some small number of cards. Two of them survived as Dampen Thought and Candles' Glow (although I called the latter Absorb Damage, and it only prevented up to two damage, but luckily lead developer Brian Schneider took notice and made it better). In any case, I'm glad to hear that both of them are winning games across the world. 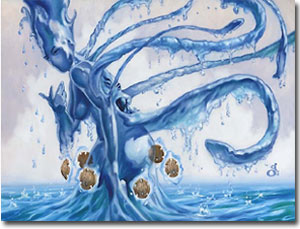 Well, now that I have control of the column, I might as well steal some thunder from Aaron and give you some other amusing tidbits that I found while browsing through the file:

(Well, I found them funny, and everyone's like me, remember? Oh, and I told you I'd be abusing this.)

The following things may or may not be true about Betrayers:

Posted in Latest Developments on January 14, 2005