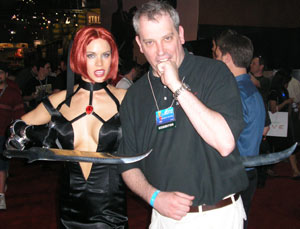 from the Electronics Entertainment Expo, more commonly known as E3. If you're a fan of video games, you should find a way to sneak into this event next year, because it is awesome in the true meaning of the word. The Magic Invitational--the centerpiece of our presence here at the event--has been going very well, so please check out the coverage when you get a chance. Granted, by the time you read this, the gang and I will have moved on to San Diego for the Pro Tour (which you can also follow online).

I've met many people in the electronic entertainment industry that are big fans of Magic, which is always cool. We've been visited by television stations, retired players, current players, Playboy Playmates, and even a college professor that is doing research on the economics of digital objects. But enough about what I've been doing--there's a card to preview.

It Was Pretty Bad Once

Most of my development stories usually involve how we took a really, really good card and watered it down. Most of those changes are necessary because of the penchant of designers to submit cards that are cranked up higher than everything currently in print. But sometimes the designers police themselves, and that's when development gets to go the other way and ratchet the power up.

This card was in the file Fifth Dawn design handed over to development:

Creature - Elf Shaman
2/2
When CARDNAME comes into play, return target card from graveyard to your hand.

Unimpressive, I suppose. It was made as one of those cards that would never rock the tournament scene, but would give creative players another toy to play with. It was costed in the same vein as Scrivener and Anarchist, which in retrospect was too conservative, since green is much better at regrowing cards than red or blue.

His cost was lowered early in development to

, which probably would have made him a decent limited card. After that, he basically languished in the file for months in that incarnation.

Verdant Collector, You Win the Prize

As development of Fifth Dawn wound down, the team reviewed each color to see if each was making valuable contributions to constructed formats. While four of the colors were relatively well represented, green was looking anemic. Granted, there are plenty of nice mana-fixing effects to help with the set's five-color theme, but outside of that there was nothing "sexy."

I can remember the meeting during which lead developer Brian Schneider had everyone look for green cards that could be made better. It was Worth Wollpert, I believe, that suggested making Verdant Collector a 1/1 for

for a 2/1, which seemed even better. We were all excited (yet nervous) about printing a Regrowth variant this potent, but there was no denying that it gave green a great tool for constructed Magic.

The card was given the name "Eternal Witness," changed from a "he" to a "she" and adorned with great art from Terese Neilsen. Voila! 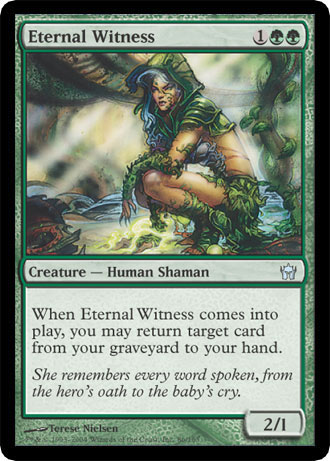 There are people that work on Magic design and development that, to this day, believe this card to be pushed too far, especially for an uncommon. Time will tell. Is it better than our last attempt at a new Regrowth, Elven Cache? Certainly. Is it strictly better? No, since Remove Soul and Stifle are both "answers" to this card that are powerless against Elven Cache. It is a fine line that we walk!

So why is this card uncommon? I think we would certainly have been justified had we chosen to make this card rare, and there was lots of talk of doing just that. The problem was that we had painted ourselves into a corner by including another green Regrowth-type card in the set at rare. The other card isn't as powerful, but it is far more complicated, and needed to remain a rare for that reason. Because we didn't want two rares with such similar effects, ol' "Regrowth Guy" got to keep her silver symbol. I hope you all enjoy the card!

The card has nearly endless possibilities, and giving you specific strategies for it seems pretty pointless. But I will tell you about the deck that made me realize just how good the card was. 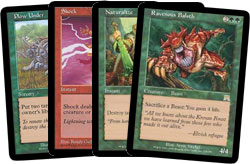 I was playing a relatively normal red/green land destruction deck with cards like Plow Under, Stone Rain, Ravenous Baloth, and Naturalize. I figured that since the deck had a high concentration of spells that would find their way into my graveyard quickly, it would be a good place to try Eternal Witness in its final incarnation.

It was amazing. On turn three, it could play the role of Cartographer, getting back a Wooded Foothills. Later on, the card became whatever I needed. If I was keeping the pressure up with land destruction, I got back a Plow Under (there is nothing more demoralizing than watching someone regrow Plow Under). If I was having trouble with creatures or artifacts, I got back a Shock or a Naturalize. If my Baloth was killed, I'd get it back. And each time, I'd get a 2/1 body almost for free. Sweet!