, and I mean lots, of stuff to talk about today. One, we just posted a B&R list change. Two, its Izzet Week. Three, Pro Tour—Honolulu starts today (I'm in Hawaii right now… try not to feel sorry for me. Last week, one of my wife's friends asked me what I did for a living, and I said, “I make card games, and then go watch people play them… In Hawaii.”). Four, I have to announce my Invitational votes for the Writers' Ballot. On to business…

Just when you didn't think it was possible, we banned “Affinity” cards in precisely the format that we thought we didn't have to ban them in: Mirrodin Block Constructed.

Why, you may be asking, are we banning the ultra-powerful Ancient Den* in Block when that was two blocks ago? A fine question. I really don't know. I think we just felt bored not having to ban stuff in other formats.

Speaking of everyone's favorite Edo-period law enforcement weapon (that would be the Jitte for those of you not cool enough to use wikipedia… Did all of you know that Mark Rosewater has an entry in wikipedia? And no, he didn't make it himself. He couldn't code a hyperlink to save his Blue/Red soul.), we yanked Umezawa's Legendary Cuisinart from the list of allowable cards in the online Tribal Wars format. In a world made up of decks of smallish creatures, he who harnesses the Jitte is king. Let's save that for the more cutthroat formats, eh?

As for what wasn't banned… Standard is fine; Ravnica Block is fine. Extended has a bad case of the Ichorids, but I'm not about to give John Rizzo the pleasure of seeing a card banned due to his crowning deckbuilding achievement. The Friggorid puzzle can be solved within the metagame, or so we believe, so we plan to let the next Extended season/event happen without banning cards. After all, the deck wasn't winning all the PTQs at the end of the Honolulu season; but if its presence continues to put unhealthy pressure on the environment after the next Extended event/season, we'll reevaluate it. Legacy is still fluctuating and looks quite healthy. After all, if a format has access to 99% of all Magic cards ever printed and people are winning tournaments with Werebears, it's hard to make a convincing argument that much is out of whack. We talked (briefly) about what cards we could afford to unban to keep the format's list as small as possible, but we felt no need to do anything right now. Health is not to be messed with. And Vintage remains its strained, stable self. As long as Top 8's are diverse and improvements can be made to existing strategies, I don't foresee us doing anything drastic in that format.

I'd love to tell you some long, complicated tale of all the twists and turns the Izzet guild and its cards took as Guildpact went through development, but there was very little turmoil. The guild was designed with an “Instant/Sorcery” theme, and that theme stayed in place all through development. The key cards that played into that theme—Gelectrode, Wee Dragonauts, and Izzet Chronarch—all came in from design, and only numbers changed on them. The Izzet Guildmage was the only spell-helper created in development, and it was done by Rosewater. Replicate underwent no philosophical overhauls, although the exact wording of the mechanic was difficult to nail down, as I'll explain next.

The initial definition of replicate—called “polycast” in design—was that it allowed the caster to pay the spell's mana cost multiple times to generate its effect multiple times. The design team liked that definition because it was very clean and created the gameplay feel we wanted for the Izzet—“If we can last until the late game, our spells will be better than yours.” There was no potentially variable cost associated with polycast; like echo, the additional cost was defined as the spell's cost, plain and simple.

It was always very fuzzy whether or not a single counterspell could take out an entire replicated spell (similar to how splice works) or not (similar to how storm works). During development, we playtested it both ways on and off, just to see which one felt better. In the end, the templating team pinned us to a wall and made us decide which it would be—would replicate produce one big spell or many little ones? Because this block followed on the heels of Kamigawa's splice (which makes one big spell), we opted for several little ones, even though that crippled the Izzet Guildmage's ability to interact with his guild's mechanic. (No big deal… he's got plenty of other stuff to fork these days, including some of the aforementioned splice cards).

It wasn't until the editing and templating asked if we wanted to put a mana cost on the replicate ability that we even considered that the two could be different.

Person 1: Do you want a mana cost on replicate?
Person 2: No, it doesn't need it.
Person 3: Well, what if we want to make the costs different next time?
Person 2: Hmmm… well… good point. Put the mana cost there then.

So even though the costs are all the same this time around, the door is open for significant tweaking when we inevitably return to this mechanic.

As for tuning Izzet for Constructed, we knew we'd have issues putting power into the guild before development even started. Although we didn't predict the exact Blue/Red decks that would emerge pre-Guildpact (Annex-Wildfire, Urzatron, Red Ninja beatdown, Magnivore, Howling Mine, etc.), we knew that those two colors possessed the best cards in a vacuum. Red had plenty of burn and land destruction, Blue had tournament playable card drawing and countering, and they both had a decent array of creatures. Knowing that, the best we could do for Izzet was give it the cards to fill gaps in their strategies (like Electrolyze) and possibly enable some crazy new deck with cards like Gelectrode, Izzet Guildmage, or Cerebral Vortex.

Here are some notes on individual cards:

What better location to have a Pro Tour during Izzet week than the Volcanic Islands of Hawaii? I'll be there doing coverage and hopefully squeezing in some time to “gunsling” against pros and locals alike. My deck of choice? A silly little Izzet number, of course, using many of the cards I talked about above. Is it a top tier deck? Not really. But it is loads of fun.

4 Sleight of Hand 4 Reach Through Mists

Speaking of Pro Tour and writing (gosh, my segue ways are fabulous this week), I'm one of the writers who get to vote one player into the Invitational based on the combination of personality and talent. In other words, who do I find the most fun to write about?

5. Osyp Lebedowicz. Osyp “gets it” as far as I'm concerned. He is a great combination of player (having won a Pro Tour) and persona. He writes the occasional online humor piece, and that same sense of humor is evident at events, whether he's in a crucial match or just hanging out with his pals.

4. Jeroen Remie. Jeroen and Osyp are very similar in my mind—both gregarious cults of personality that are among the best players in the world. Jeroen has befriended people from all across the globe and is quickly becoming one of the most recognizable players in the game. I give him the slight nod over Osyp because he is a more regular contributor as a strategy writer online.

3. Sam Gomersall. Although I don't know him very well personally, I love the idea of Sam Gomersall. He's a guy that lays it all on the line for the enjoyment of Magic. He's constantly drafting online and when he isn't, he's on a plane somewhere to an event. I've heard tales of him turning pocket change into money for dinner by winning bets at pool and Magic, and he mentioned in one of his online reports that he blew his entire stash of winnings on Magic Online drafting five colored Aura decks just for kicks. Sam really captures the ups and downs of the “professional gamer” in my eyes. 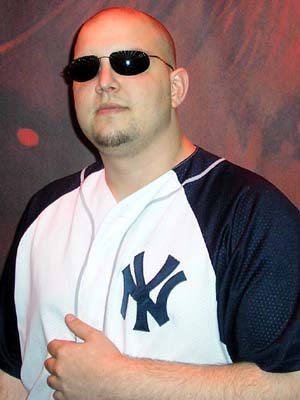 2. Tsuyoshi Fujita. Fujita has several years on most of the guys on this list, but those years have given him the wisdom to really contribute to Magic on many levels. In this age of net-decking, Fujita upholds the importance of the deckbuilding visionary, continually investing hours and hours of his own time to come up with creations that the rest of us can enjoy. Without people like Fujita, Magic would be a much more boring game.

1. Neil Reeves. I have to have some kind of bias towards Reeves because he reminds me so much of my brother, my high school friends, and my college roommates—the people I had the most fun playing Magic with ever. Neil can banter with the best of them, always making a snide or hilarious comment without crossing the line of distastefulness. He plays the dumb jock role to a tee with his dingy ballcap, drawl, and his (now retired) toothpicks, but in actuality his mind is a steel trap. He can find uses for cards in Limited that every other player on Earth has dismissed, and can play a mean game of Constructed as well. He injects a dose of competitive humor into every game he's involved in, from the Feature Matches at the PT to the midnight drafts in the hotel lobby. In my perfect world, everyone plays and enjoys the game the way Neil does.

Wow, a close call between the two “large art” promos. The good news, of course, is that we're going to continue using all three for various Organized Play programs for the foreseeable future.

*: And Seat of the Synod, and Vault of Whispers, and Great Furnace, and Tree of Tales, and Darksteel Citadel, (/inhales) and Arcbound Ravager, and Disciple of the Vault, and Aether Vial. Omega Myr is still legal, so have at it.