You Can Go Home Again

you get hired as a Magic developer, a funny thing happens—you stop spending your free time playing Magic.

Many of us had either full-time jobs or school responsibilities that took up the bulk of our time prior to our working here, and we'd spend the bulk of our free time playing, talking about, reading about, or building decks for Magic, which could really cut into our social lives. Once we got to Wizards, all the Magic stuff moved into the "job" slot, freeing up the evenings and weekends for other pursuits.

It's not that Magic isn't fun for us any more; it's just not what we typically choose to do when we need to relax after eight or nine hours of, well, Magic. Granted, most of us will hop online to try out or watch new decks from time to time, or we'll spend a Saturday at an unsanctioned store draft or Vintage event, but usually we leave our work at work.

But lately there has been a flurry of "extra-curricular" Magic happening around the office. It seems that between the handful of Magic interns the Great Designer Search gave us and the staffing-up our Digital Games department is doing, there are a lot of new people that really love playing Magic and can't wait for 6:00 to roll around so they can shuffle up some cards. And their enthusiasm is contagious!

But the free-time Magic activity that has caught my fancy recently—as well as the fancy of many of my coworkers—is not the product of any new hire's youthful enthusiasm, but rather the brain-child of one of Wizards' most august stalwarts—VP of Organized Play Chris Galvin.

I got an email from Chris a month or so ago and this was the bulk of it:

So, the other day I felt like playing Magic. This idea is the outcome.

I intend to start a new kind of concept I'm calling the Magic Super Limited League (a good name will come to me later). Here's how it will work.

In a nutshell, what this amounts to is playing Constructed where the only cards each person begins with is a single booster box of Ninth Edition and trading is allowed.

Of course, we managed to talk Chris into waiting until Tenth Edition came out, as it's always more fun to play with newer cards. 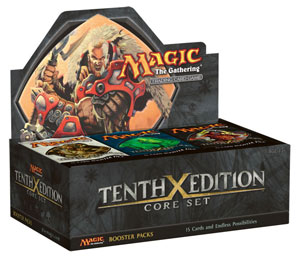 So far, the league—since renamed the "You Can Go Home Again" League—has been a smashing success. In between meetings and formal playtests, I see people trading and playing their 10E decks against one another. On Friday afternoons, a large meeting room is blocked off for people to gather and play. And the funny thing is, no one is keeping score! There are no recorded wins and losses, no ratings, no standings, no prizes for winning, no ante, no additional boosters given away once you have some number of losses. That's why it's fun for me—I don't have to be competitive. Sure, I want a deck that can and does win some number of games, but if I lose no one is writing it down.

I asked Chris for his motivation for creating the league and his thoughts on its success.

"I played Magic before I joined WotC. I played Magic before the DCI existed. When I joined up with WotC during the first Clinton presidency I noted that my cards had lost all their perceived value in my own mind. I used to joke that working at WotC was probably like working at the US mint. After you've seen a couple shrink-wrapped pallets of $20 bills, you don't think about money the same way.

"A bit over a month ago, I felt like playing some Magic. While I draft from time to time, it's not really my preferred format. I like constructed. Being one of the heads of the DCI, the answer was obvious. I'd create a rule system that enforced the kind of scarcity and appreciation of limited sets of "owned cards" that doesn't exist naturally in WotC, where bomb rares are as common as grease stains on a fat man's tank top.

"The idea seems to have a struck a nerve so far. Actually, it has become a mixed blessing. On the one hand, I'm glad that I could promote an idea that got a bunch of people in the gamer-heavy divisions of OP, R&D, and Digital Gaming enthused and entertained. That is sort of like my job, after all. On the other hand, we're up to about 32 people in the league by my latest estimate. That means there are 1152 rares floating around the league pool, or an average of about 9 of each one. My rough hope was that it would be possible to build a four-of rare deck, but it would be very hard. Now, you can have two Legacy Weapon decks square off against each other. This problem will become exacerbated when we start adding boxes of Lorwyn, etc. My next challenge will obviously involve putting this Djinn back in the bottle before it's too late."

The trading is what makes the league what it is, turning it from some kind of souped-up sealed deck format into something that actually simulates small-market casual play. If you have a deck in mind, you can put in a lot of work to make it happen, or you can be opportunistic and play with whatever you can get your hands on. 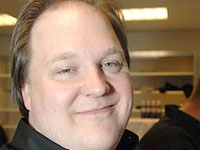 VP of Digital Gaming and former PT Champion Randy BuehlerPeople are approaching it very differently, which I find fascinating. Randy Buehler, for instance, traded for a mono-blue control deck on day one—easy because the card drawing and counterspells he needs aren't rare—and hasn't really altered his deck since. Some people, like Alan Comer, enjoy trading away their whole deck and trying something new every week or so. Some people, like Devin Low and Mike Turian, have one deck built and are trying to piece together a second deck at the same time. And then there are those that don't do much trading at all, and have decks that are ones and twos of various things with no real focus. I imagine they lose quite a bit.

The deck I started with right out of the box was a blue-black control deck that splashed red for a single Blaze. It had creature kill, counters, card drawing, and some big fliers. I figured other players would be attracted to things like green creatures, and I could easily take advantage of that. As I played and traded in the conference room that first Friday, I realized two things. One, other people had decks like mine but way better. Randy's blue deck was one of them, and multiple people we trading hard for black control cards as well. Two, the deck was not one that I would enjoy playing day after day. Like I said, winning wasn't important, but enjoying myself was. So I tried making a black beatdown deck instead, trading for a Graveborn Muse and some Consume Spirits to go with my Lord of the Undead and Hypnotic Specter. That fascination didn't last long, as I knew that Greg Collins was trading for the same cards I was, and Devin Low was trying to do something with Zombies. My deck wasn't going to be original, and it was going to be difficult to complete.

I looked around at other peoples' decks and saw many of them were one color, with the balance being two colors. I figured I'd go out of the box and try to use the set's mana fixing to make a five-color deck, so I set out to find a Legacy Weapon.

Devin had one, as well as a Joiner Adept and a second March of the Machines. I traded him all of the black cards I had amassed for those plus a Crucible of Worlds and some other pieces for a five-color artifact deck, and that's the path I've been on ever since.

I lost a lot with the deck early and kept tuning it. The four Civic Wayfinders were too slow and clunky. As I slimmed the deck down to mostly blue and green with one of the rest of the basic lands, the Joiner Adepts became unnecessary. I discovered how powerful Seedborn Muse was in the deck. As I traded and tuned it more and more, it got better and better and now I win a decent amount. Here's the decklist:

2 Persuasion 2 March of the Machines

This is an ideal causal Magic deck for me. It has a nice combination of four-ofs and one-ofs, so it will do some things the same in every game and many things different in every game. It has a decent base game plan, but there are big dreams as well—only once have I ever had all five basic lands in play plus Seedborn Muse plus Legacy Weapon.

That last trade (made with Alexis Janson) would be totally absurd in real life based on the market value of the cards. But it felt like a winner to me—my deck got a tangible power upgrade.

The last trade I made was giving a Relentless Rats for a Treasure Hunter. Ryan Miller is the one guy in the league collecting the Rats, and he had eleven at last count. Quite hilarious.

As a comparison to my deck, here's what Evil Genius and former columnist Mark Gottlieb has been working on, a Goblin-based Sac-O-Matic killing machine:

2 Grave Pact 1 No Rest for the Wicked

Like my deck, Mark's has four-ofs and one-ofs, making for a nice blend of consistency and variance.

What impresses me most about Mark's deck is that he's been able to trade for three Siege-Gang Commanders (I believe he started with zero), as the Commander is one of the hard-to-pry-from-people's-hands cards in this league (others being Wrath of God, Platinum Angel, and Mind Stone).

This play experience has been incredibly enlightening to me as a developer, as I get to see how cards are valued in small circles, what cards inexperienced players are attracted to, and what colors feel like they are missing a little something in Tenth (white decks are few and far between). I'm excited to either add to the decks when Lorwyn comes out, or possibly just start over then.

But in the meantime, I'm going to keep tinkering with this deck. Maybe I can get another Muse. And I hear Galvin is trying to trade for Hurkyl's Recalls—what in the world does he have up his sleeve?

Attendance numbers are still trickling in and they look quite impressive. Game Day was a rousing success from our end; I hope it was from yours as well!