am just back from the Grand Prix and I am so tired that it is officially the first time I have ever found myself wanting to be on-theme for a Theme Week. After a long weekend of coverage I had the added bunus of sitting on the runway for more than an hour wating for my plane to take off. I have little snippets of things to write about but not necessarily one unified article in me this week and long for the confines of a theme week to guide me. I considered writing on-theme (I wasn't on the original list for Sorcery Week) but I haven’t paid attention to what sorceries people are going to write about this week. How embarrassing would it be to have two writers do the same article about Hunger of the Nim?

I was hanging out in the hotel lobby with a gaggle of Magic players—anyone know the collective noun for magicians?--the night after the Grand Prix and there were two players who stood out due to their nervous energy. They seemed restless, twitchy, and excited. We struck up a conversation and it turned out they were two-thirds of the team that had just won the Sunday Pro Tour Qualifier.

As I was leaving the venue I had encountered my magicthegathering.com predecessor Ben Bleiweiss. I called out to him and he ‘shushed' me rather harshly. He was overseeing the finals that the two gentleman I spoke with eventually won. Apparently it had been a long and difficult finals with all three matches going to three games and drama aplenty.

I can't recall the names of either of the players I spoke with but they were from the New England region of the country and had been playing for a long time. They were regulars at the Your Move Games PTQ scene and they found their victory all the sweeter for having to get past two different YMG teams to earn the each member of the trio their first invitation to the Pro Tour.

It was great talking to them and watching them as they paced with nervous energy about the hotel. I am sorry that I did not catch their names and that I missed an opportunity to celebrate the next step of the Magic journey for these veteran players. I know that Mike Guptil of Professional Event Services is one of the few Tournament Organizers that gives credit to the winners of his PTQs, Trials, and countless other events each week on his website. Other tournament organizers should attempt to follow his lead. Winning a PTQ is hardly an easy task and the winners should not have to succeed at the next level of the game before receiving some acknowledgment for their accomplishment. My congratulations go out to the anonymous trio from New England--great job guys! 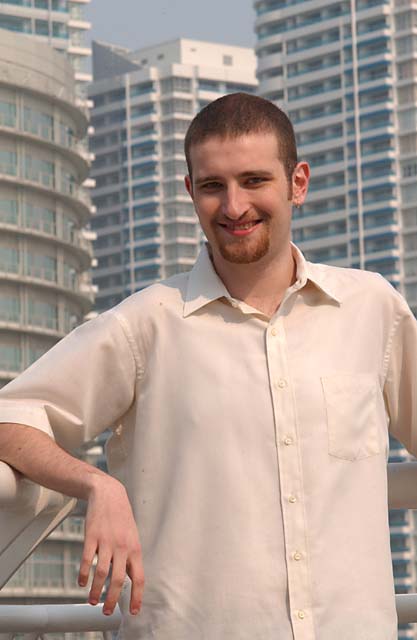 Jon Finkel, PT Yokohama '03Speaking of congratulations… I am constantly impressed by Jon Finkel. In the days leading up to the Grand Prix I sat in on two practice drafts against his team Re-Elect Gore. Jon had played very little with Mirrodin and even less with Darksteel. He was still reading cards and learning the interactions and pick orders. Of course his team won both of their drafts and also went on to make the Top 4 of the Grand Prix. Credit for that should be given to all three players—Brian Kibler and Eric Froehlich as well as Jon—but that is not what impressed me about Jon individually.

Right in the middle of Day Two, Re-Elect Gore was drafting against Your Move Games/Illuminati. A pack was opened and five players huddled over it and debated the picks and tried to anticipate the other team's moves. Jon Finkel clapped his hands, leaned back and smiled. While everyone else was still looking at the cards he was already done and had figured out not only what cards he wanted but which cards his team would get when YMG was done picking the pack over—and he was obviously pleased by how it would play out.

It was a subtle thing but it illustrated for me that his awareness of the cards was far more acute than anyone else's at the table. I don't mean to diminish the great talents of Rob Dougherty, Alex Shartsman, Darwin Kastle, Brian Kibler, and Eric Froelich—each player has made the third day of a Pro Tour and accomplished everything us mortal Magic players dream of—but Jon is a unique and prodigious talent. Throughout the weekend players marveled at his ability to pick the game up cold just before the event and perform at such a high level.

Pro Tour San Diego is only a few weeks away. In preparing for and playing in Grand Prix: DC Jon already has more practice with Mirrodin block limited than he did with Odyssey block going into Yokohama—his last Pro Tour Top 8 appearance. Expect big things from him at both the Invitational and Pro Tour San Diego.

Covering any Grand Prix is a tough job. Covering a team Grand Prix is even more challenging. There are more players to keep track of, more games to follow, and almost every round you cover seems to go to the time limit. One of my few regrets about the coverage at Grand Prix DC is a joke I missed in the blurb for the event recap. Finkel, Kibler, and Froehlich decided to play in that nation's capitol with the politically charged name of Re-Elect Bush.

I tried to play off of their name when I wrote that Thaaaat's Me stole a victory from Re-Elect Gore in the semi-finals. It wasn't until hours later that I realized I had missed a chance to mention that Thaaaat's Me is from Al Gore's least favorite state in the nation—Florida. Doh.

The North American Challenge and Standard

There was once a weekly tournament series in New York and Boston known as the Grudge Match. It was a series of weekly qualifiers that fed into two bigger tournaments at Neutral Ground and Your Move Games. The winner of each tournament would face off to determine which store would have the North American bragging rights until the next tournament. The format for the tournaments was almost always Standard and the Top 8 decklists were published on the respective websites each week. 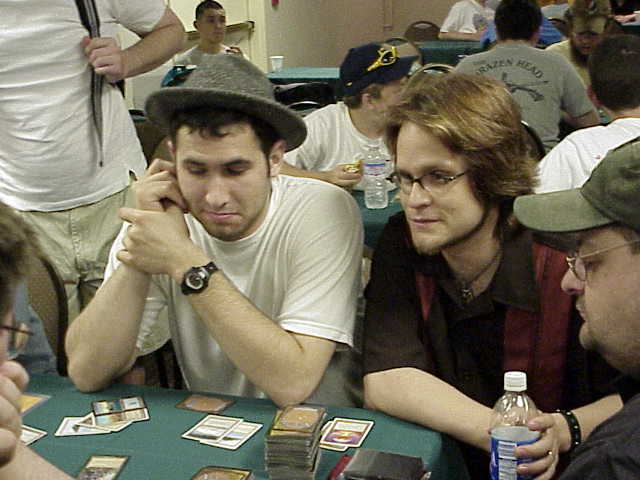 Zev Gurwitz and Adrian Sullivan, GP NJ ‘03In the days leading up to any major Standard event you could look at the Neutral Ground page and see who was doing well and with what decks. You would see one player's name show up again and again and you could usually tell that something was brewing. Osyp Lebedowicz first came to my attention when he made the Top 8 of the event for many weeks running. Zev Gurwitz became part of the Magic landscape when his Standstill-based Zevatog deck dominated the field for an entire season.

Eventually the tournaments fell by wayside for a variety of reasons and nothing else has really stepped in to replace them. Hopefully the North American Challenge—a Grudge Match inspired tournament series that encompasses many more stores--will fill the void that has been left in their wake. In preparation for five NAC qualifiers and for Regionals, Neutral Ground has been running a heavy schedule of Standard events and even publishing the results and decklists just like the old days.

The name Josh Meckes keeps popping up with a variety of blue-white builds. I know from the correspondence from a number of my readers that Proteus Belcher decks are a popular choice among the magicthegathering.com community. Josh recently made the semi-finals of a Neutral Ground event with the following build that you might want to add to your Regionals testing.

For those of you unfamiliar with the deck, it wins by using Proteus Staff on a token creature to set up the entire deck so that a Goblin Charbelcher is your next card on top of twenty non-land cards. Even instant-speed artifact destruction can't stop you from doing twenty if you have enough mana to play and activate the Charbelcher on the same turn. You only need to stay alive long enough to pull that off. Go go Pulse of the Fields!

Next week: There has been plenty of discussion about what decks to play at Regionals. With only a handful of boxes left to X out on the calendar until Regionals arrives here in North America I will take a look at some of the different sideboard options for the big day.