funny thing happened on the way to the artifact block…

The big news about Fifth Dawn is that it introduces a heavy five-color theme to the previously heavily colorless Mirrodin Block. There are new mechanics and card cycles that reward you for being able to produce as many colors of mana as possible. This should not be confused with the Domain cards from Invasion Block as this is quite different. Domain rewarded you for having as many of the basic land types in play as possible—the cards in Fifth Dawn don't care one whit about what lands you have in play. The cards in Fifth Dawn are only concerned with what—and how many—colors of mana you can generate. Mana-fixing is the order of the day here.

After being initially shocked by the five-color twist in the third set I quickly realized that it should have been somewhat obvious. The tools of a five-color set are littered throughout the first two sets. Sylvan Scrying and Reap and Sow have been fetching Cloudposts and Urza's Towers in constructed but they have also powered up many an off-color removal spell in my green-white draft decks. Journey of Discovery, Chromatic Sphere, off-color Myr and Talismans, Mirrodin's Core, and Darksteel Ingot will all get worked to the point of breaking when Fifth Dawn is added to the Limited mix.

In Mirrodin/Darksteel limited, Journey of Discovery was often the hallmark of a draft gone horribly awry. With Fifth Dawn it will become a staple card and you can expect it—and all of the other mana-fixers—to be drafted with greater urgency than ever before in anticipation of the third pack. Not only does the third set give you outlets for all that mana but Fifth Dawn introduces one of the best mana-fixers to ever see print. 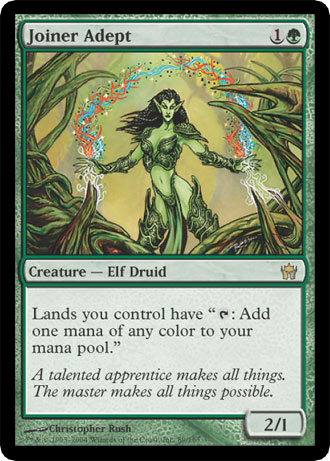 With five lands and the Joiner Adept in play you can produce the full spectrum of mana and take full advantage of the five-color wackiness that Fifth Dawn offers. She is also an economical two power for two mana creature that should see play in both Limited and Constructed. The first deck I thought of when I saw this was the green-black cemetery deck with Death Cloud. While very powerful, the deck often suffered from mana issues centered around needing double green and triple black in the same deck. I even saw one deck at Northeast Regionals this past weekend that further complicated its mana issues by bringing in Dwarven Blastminer from the sideboard. Here is Vicky Fu's deck from the Top 8 of Hong Kong Regionals.

This deck could easily benefit from the mana repair work of the Joiner Adept. You could remove the Headhunters, two Twisted Abominations, and maybe one Nekrataal for four Wirewood Heralds and three Joiner Adepts. The Heralds give you the ability to stock your graveyard thanks to Skullclamp. Not only does a chain of Heralds restock your hand and bring your Cemetery online--since the Joiner and the Zealot are both elves you can make either one the last link in your elf chain when you are done sacrificing Heralds. It allows you to get which ever one will be more useful given the circumstances.

Of course, it seems like a shame to waste the Joiner on fixing the mana in a two-color deck when it is capable of so much more. Fifth Dawn will offer plenty of goodies that will reward you for making five colors of mana. Here is just one tantalizing bonus preview which should give you an idea of what Magic should be like when Fifth Dawn rises. 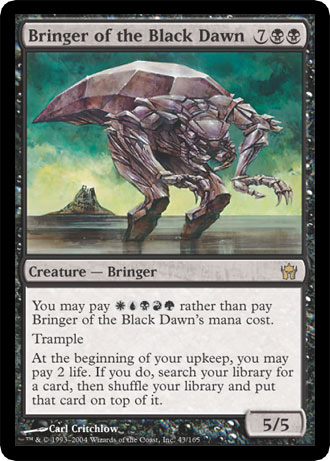 Yup. It is a Vampiric Tutor every upkeep if you are so inclined and without the nasty card disadvantage of the original. With five colors of mana at your disposal and any card in your deck available at an upkeep's notice you should be able to find a way to win. The Bringers are a cycle of cards that can all be played if you can make five colors of mana and have ridiculous—or so I am told—effects that you can activate during your upkeep. You could plop one or two copies of the Bringer of the Black Dawn right into the cemetery deck we were just discussing. With recursive Baloths the two life should not be an issue and you can easily search up a Death Cloud, sideboarded Dwarven Blastminer, Nekrataal, or whatever tool you need to devastate your opponent's side of the table.

2 Bringer of the Black Dawn
37 Cards

Switching gears back to limited for a moment, Fifth Dawn may be a five-color set but the Bringers might as well be colorless. I am reminded of the Zombie Cutthroat from the previous block. Although he was ostensibly a black card he was drafted as though he were an artifact creature because anyone could unmorph him regardless of their mana base. In Fifth Dawn limited anyone with sufficient mana-fixers will be snapping up Bringers regardless of their base color.

And the Bringers are only the tip of the iceberg when it comes to the five-color insanity in this set so you should expect all of the mana fixing cards to go much higher than before. With only one pack of Mirrodin both Myr and Talismans should be at a premium. There are plenty of common, uncommon, and rare cards that will behoove you to pick up Darksteel Ingots and Mirrodin's Cores.

Just as the Bringer of the Black Dawn is just a small hint of the five-color theme in Fifth Dawn, the Joiner Adept should give you an idea of what kind of mana-fixing will be in the third pack to support that theme.

Next week: No preview card from me, as Adrian gets his first opportunity to write a preview. Instead I will be taking a look at the aftermath of Regionals and looking ahead to the JSS Championships and Nationals.