am really looking forward to playing with Death Cloud. I think it is potentially one of the most powerful cards in the Mirrodin block. I can easily see it being played in Mono-Black Control decks in Mirrodin Block Constructed, Standard and possibly even Extended. (As for Vintage, Darksteel offers other tidbits for the aficionados of that format to chew on). But, before we go any further, you would probably like to get a load of this bad boy… 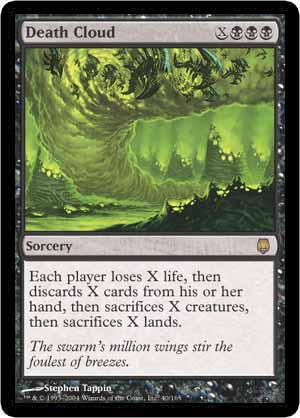 During my years of Magic experience I have come to appreciate that symmetry is not all it's cracked up to be. A symmetrical card is one that generates an effect that affects both players. Wrath of God, Armageddon, Pox, and Jokulhaups are all famous examples of symmetrical cards. One of the hallmarks of powerful symmetrical cards is that they were all dismissed after their initial release merely because they affected both players.

I have been playing this game long enough to remember looking at an Armageddon that I opened in an Unlimited booster and being disappointed by opening a bad rare. I can recall the days when Wrath of God was regarded by most with a puzzled scratch of the head and "Why would they print this? Your creatures die too!"

It wasn't too long before players learned to look for symmetrical cards to exploit in each set. The way you exploit the symmetry is to tune your deck to be better prepared for the effect than your opponent's deck. With Armageddon it was by playing cheap efficient creatures and destroying your opponent's land (and your own) before their threats or answers would come online. Having mana producing creatures or mana producing artifacts would allow your deck to operate while your foe's mana was hopefully set back to zero. Winter Orb and artifact mana was another great combo for doing an end-around a powerful symmetrical card's effect.

You need only look at the success of the current crop of blue-white and green-white control decks in the Standard environment to understand what makes Wrath of God some of the most desirable trade bait in any player's Magic binder. The blue-white decks currently popular force opponents to over commit creatures in order to race an unmorphed Exalted Angel or push a Story Circle beyond its limits. Then the opponent gets punished with a lopsided Wrath while another Angel or a recurred Eternal Dragon is usually waiting in the wings as a follow-up.

Another great example is Pox. Pox was one of many powerful Ice Age cards that took a while to get it's due. There has been much bandwidth devoted to how Necropotence was overlooked (and even panned) when Ice Age was first printed but it was hardly the only powerful black card to receive that treatment when the stand-alone hit the stores. Demonic Consultation was also laughed at as the first Necropotence decks tore their way through the senior and junior portions of the first Pro Tour and it took even longer for Pox to shed the mantle of bad rare.

In fact, it wasn't until Pox was reprinted in Fifth Edition (and the advent of Extended qualifiers) that it really got its due. There were a number of different decks that used it but it was the version that qualified Chad Ellis for his first Pro Tour that most people remember:

Chad's deck was very powerful and cannot be replicated due to the lack of anything even remotely as broken as Dark Ritual in any of the non-Vintage constructed formats. But, we can still look at how he took advantage of Pox and possibly apply it to the new version of the card. One of the things that was always appealing to me about this deck was its ability to "store" cards on the table with cantrips like Urza's Bauble. With Yawgmoth's Will the Urza's Baubles were like mini-Inspirations.

Getting back to the card at hand, Death Cloud is clearly a "fixed" Pox. It is more expensive than the original, with an

being tacked onto the original's

. But the addition of that

gives you a degree of maneuverability that Pox never had. Plus, there is none of that icky math from the original.

I began to think about the applications of Death Cloud for the upcoming Mirrodin Block Constructed format and I am very excited about the possibilities. My initial deck—without the benefit of any Darksteel cards beside the Death Cloud—looks something like this. The idea behind the deck is to develop a post-Death Cloud mana base while stockpiling Spellbombs on the table to replenish your hand.

One of the other things that Pox decks have relied upon in the past that is not present in Chad's version is something we mentioned earlier while looking back fondly on Armageddon: Artifact mana. Cards such as Mox Diamond or even the Mirage diamonds would help ensure that you recover more quickly from the Pox than your opponent. The same idea applies to this deck list.

The Sun Droplets will get you back any damage your opponent might throw at you early. If you can get two or more in play at the same time you can even start gaining life. With the Talismans you can take damage and put a counter on each Droplet and gain one point of life on your opponent's upkeep. I have had solitaire games with this deck where I end up with ridiculous life totals.

Either of the spellbombs could become Necrogen Spellbombs quite easily if you needed more discard but I think the two that are in the deck offer you a little more versatility. The Pyrite Spellbomb gives you some additional removal and extra damage to finish off your opponent. The Aether Spellbomb can return a Grid Monitor to your hand end of turn so you can cast Barter in Blood on your own turn without losing a creature yourself. Mostly you will want to merely cycle the Spellbombs after a Death Cloud to refill your hand once you've wiped out your opponent's entire hand, all their creatures, and most of their lands.

If you don't feel comfortable with all the rares in the deck you might want to consider replacing the card drawing of Promise of Power with the uncommon and underrated Mindstorm Crown. I don't know exactly what the deck will look like once all of Darksteel is revealed. I know the deck would be greatly improved by a Chimeric Idol or Jade Statue type card. Stalking Stones is not going to cut it in this deck but a card that mirrored the mechanics of a Mishra's Factory might.

There are certainly other ways to exploit this card. Rukh Egg is definitely a fun possibility in a red-black build for Standard. If you wanted to play with more creatures you could also try and exploit Synod Sanctum to "store" creatures much the way the Spellbombs store cards in your hand on the table.

Symmetry is just as much fun as it has always been. One thing has changed about it though: this is one card that won't get overlooked for very long.