How Much Would You Pay? 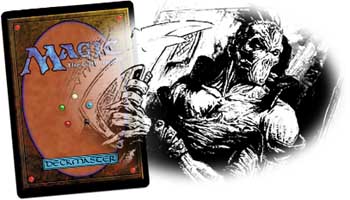 . Here is the situation.

Your opponent lays down his fourth land—he now has two plains and two mountains—and attacks with the morph. You're tapped out, and you don't know what to do. Should you block? After all it might be a Skirk Commando, which if you choose not to block, he could unmorph to kill your creature anyway. On the other hand, it could also be the first-striking Battering Craghorn or a Daru Lancer, which in addition to first strike is also very large. Both possibilities are sure death for your poor little morph.

If only you could flip over a 3/4 black creature without having to pay any mana. How much life would you pay to be able to do that. After all, you are faced with taking 2 or 3 damage here—and possibly losing your morph to boot. Would you pay that 3 life for the ability to flip over a 3/4?

Of course you would under those circumstances—3 life is clearly a bargain there. You're taking at least 2 and possibly as much as 3 if you don't block.

How much would you pay?

That's the question asked by Zombie Cutthroat, which features the Scourge set's new twist on the morph mechanic. The Scourge set introduces us to a series of creatures with nonmana morph costs. The Cutthroat costs 5 life to turn face up, which seems like a bargain to me in the early game. Look at the situation outlined above. Not only have you likely killed any common morph that your opponent was tossing your way, but you did it without spending any mana.

Let's pretend for a moment that the creature your opponent attacked with was a Battering Craghorn. After you block it, your opponent pays its morph cost and unmorphs his 3/1 first striker. With first strike on the stack, you adjust your life total to 15 and deploy your 3/4 Zombie—surviving the damage from his Beast and dealing 3 points of regular combat damage. Not only is the Craghorn dead, but your opponent is tapped out and has no fourth-turn play. You, on the other hand, have all of your mana available on the next turn, a 3/4 Zombie, and an incredible tempo advantage over your opponent all for the low, low price of one quarter of your life total.

At 5 mana for a 3/4, he has a reasonable casting cost for later in the game when 5 life might be a little much. What's really amazing to me about this card is that you don't need to play swamps to use it. In the situation above, your opponent, with two plains and two mountains, could easily be playing this guy—why not? At worst, the Zombie Cutthroat is an off-color morph. At its best, it is a devastating combat trick that offers you a tremendous swing in the tempo of the game.

There have been a number of black cards in past sets that cost you life. The Onslaught set itself offers the Wretched Anurid and Embalmed Brawler—both staple cards in the world of Limited play. Serpent Warrior gets played in Seventh Edition drafts all the time, and Lurking Evil—which costs half of your life to activate—was a first pick in Limited and saw significant Constructed play as well.

Zombie Cutthroat edges all of them—except the Lurking Evil—out in overall card quality. Late in the game, Wretched Anurid and Serpent Warrior can sit in your hand unable to be played due to a precarious life total. Embalmed Brawler is unimpressive late in the game off the top of your deck with an empty hand, and can even be a liability in play if there are too many counters on it. At worst, Zombie Cutthroat is about as unimpressive as Embalmed Brawler in a deck without swamps late in the game—your basic Gray Ogre. On the other hand, in black decks, it will always hit play as a fairly sturdy 3/4 in the late game via the numbers in the upper right-hand corner. 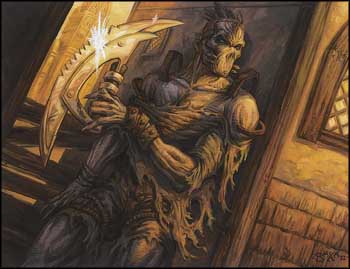 I am looking forward to watching players use this card at the Prerelease. In drafts, will it end up in off-color decks or will most players simply let it go to the player who chooses to create a black deck? What about Sealed Deck? Do you splash this guy if you are not playing black? I would certainly put it in my playables pile regardless of my colors during deck construction—I'd pretend it was an artifact creature. The Cutthroat would give nonblack decks a good answer to Dirge of Dread and Gluttonous Zombie. I would happily pay 5 life to kill a fear creature with my blue-white deck if I have no other answers available.

As far as Constructed goes, I do not think this card will make much of a splash. I guess I can see it being played as an early defender in a monoblue deck—not unlike Steel Golem in the old "Steel Curtain" deck—but I really have to strain my eyes to do it. Somehow, I don't think a 3/4 for 3 is going to cut it in an environment in which Angels are 4/5 fliers for 4 and 17/17 Dragons hit play on the fourth or fifth turn.

Obviously, I am not going to talk about a new twist on morph costs with only one instance of such a thing in the new set. There are a handful of new cards with nonmana morph costs, as well as plenty of new and exciting morph triggers. Next week, I'll take a look at the high cost of card drawing with another sneak peek at an upcoming Scourge card.