A Little Bit of Knowledge

I first received my assignments for the Scourge previews, I was happy that Rush of Knowledge was scheduled to be the last card I would have to reveal to the MagicTheGathering.com readership. That might sound like I was saving the best for last, but truth be told, I had no idea what to make of this card. Rush of Knowledge is one of a series of cards that exploits the mana cost of cards in play—in this case allowing you to draw cards equal to the highest converted mana cost among permanents you control. 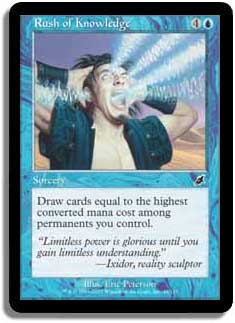 I have never been a huge fan of cards that are dependent upon other cards being in play to be good—Tethered Griffin anyone? "Nothing like topdecking this card after a Wrath of God," was my first thought. Then I remembered having a similar feeling about Erratic Explosion when the Onslaught set first come out. While I knew it would be reasonable in Limited, I was sure that card would never see Constructed play—how wrong I turned out to be. For reference:

Obviously, there are always going to be cards in your deck to reveal with Erratic Explosion, making it far more reliable than Rush of Knowledge. But if you could get it to work . . . How can we build a deck that exploits Rush of Knowledge? 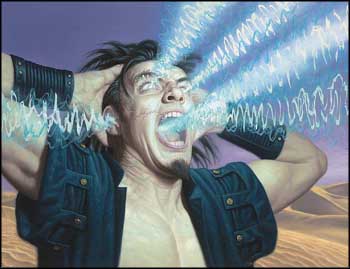 Typical blue-green is not going to be a good candidate. The creatures are all too small, with the exception of Arrogant Wurm, which would let you draw five cards quickly thanks to its madness mechanic. Wild Mongrel and Basking Rootwalla would be unimpressive. The former would be a more expensive sorcery version of Inspiration, while the latter would make it an expensive cantrip. Roar of the Wurm tokens have a converted mana cost of 0 so they are out—as is the possibility of putting Rush in this deck.

It seems like the best chance for Rush of Knowledge to be good is going to be in an Astral Slide deck with large creatures that are played out inexpensively via the morph mechanic. Exalted Angel and Quicksilver Dragon will both yield six cards off of a Rush of Knowledge, which will fill your hand with cycling cards and counters for the rest of the game. (Remember, a face-down creature has converted mana cost 0, so make sure that you unmorph your Angel or Dragon first.)

Astral Slide will also protect your creatures from any nasty surprises. If your opponent has a well-timed Starstorm in response to Rush of Knowledge, the Slide can save your creature; at the very least, Astral Slide serves as a permanent that allows you to draw three cards. The number of cards you draw with Rush of Knowledge is determined upon resolution of the spell, so if your opponent kills, bounces, Slides, or removes your highest cost permanent from the game before Rush resolves, the Rush looks at the most expensive one remaining—even if it is just a land. Having a variety of permanents in play will guarantee that you draw some cards when you cast Rush even if it is just three from Astral Slide and not six from your Angel sitting safely on the sidelines until the end of your turn.

We could try using cards like Krosan Colossus, but we can easily build a deck with the Exalted Angel and/or Quicksilver Dragon that can unmorph either creature without relying on Astral Slide to do it for us. Besides, drawing nine cards is excessive—fun, but excessive. Drawing six seems more than fine for five mana. Using the already existing AquaLube deck as a base we can quickly sketch out a deck that attempts to exploit the new card drawer.

AquaLube with Rush of Knowledge

4 Rush of Knowledge 4 Wrath of God

The deck has only ten nonland permanents, but with an Astral Slide in play, it is difficult for your opponent to destroy them. The Rush of Knowledge will restock your arsenal of cycling cards allowing you to either protect your threats or clear your opponent's creatures out of the way. Older incarnations of this deck relied on Scrivener recursion, and I have simply replaced the five-mana 2/2 with a spell that has the ability to draw between three and six cards when it is played.

Rush of Knowledge will certainly make its presence known at the Scourge Prerelease, as it should be a powerhouse Limited card. While it is unlikely that you will get Exalted Angel in your Sealed Deck, the common Daru Lancer will yield you six cards on the fifth turn via morph. Although, drawing four cards off a Mistform Seaswift, Daru Stinger, Ascending Aven, or Dive Bomber will be fine for any blue-white Sealed Deck. It may even be common to draw as many as eight cards as soon as turn five, but you will have to wait until Friday to find out the skinny on that one!

That's it for the Scourge previews for me. Next week, we start rounding the Learning Curve again, but I will be back later this week with a feature about getting the scoop on the Scourge set in real life.