mind is reeling at the deck building possibilities for the upcoming State and Provincial Championships. It will be the first major tournament to include Mirrodin. There have barely been any significant tournaments with Core Set so it is a doubly complex environment to sort out. The rotation in of Core Set complicates matters by taking away a number of staple cards and adding some tantalizing possibilities that have yet to be explored. This year's tournaments should provide a wide array of decks from the well worn to classic updates to completely new designs. 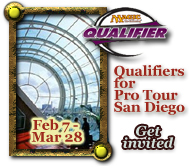 Over the next couple of weeks I am going to look at some of the decks you can expect to see and might even want to consider playing. I have broken them up into three categories. Something Old will look at decks from the past block constructed season and the previous Standard environment. Something New will look at the doors opened by Mirrodin and whether there are any new deck types lurking in the new set. Something Borrowed and Something Blue? Will look at old deck archetypes that are again viable thanks to key reprints in Core Set and will also look at the possibility of a blue deck without Counterspell.

Looking at Past Decks

Generally, the field at States fails to exploit the new set each year. Despite weeks of hype about new decks leading up to the event it is generally the established decks from either the last Standard season or Block Constructed season that thrive. While that may not be the most encouraging statement for the rogue deck builders out there it does mean that there is something of an established metagame, which does allow for you to adequately prepare.

The most dominant decks in Block, Standard and even Extended over the past year were Goblin builds. Goblin Warchief, Goblin Piledriver, Goblin Sharpshooter, the unlikely Skirk Prospector and the ridiculous Siege-Gang Commander emerged at the top of the standings regardless of format or build. Mana issues for Goblin Bidding may result in it not make the cut to the new Standard although I would not count it out entirely.

Lost in the sea of Wake decks at this past season's World Championships was Sylvain Lauriol's 6-0 performance with a three color Goblin Bidding deck. His manabase only loses two Shadowblood Ridge to the inclusion of Mirrodin (and the ousting of Odyssey block). The Firebolt and the Lava Dart can be easily replaced by the Silver Knight slaying Pyrite Spellbomb. The deck loses the most cards in the sideboard but sideboards are constantly changing so that might not be critical.

Goblins in their purest form finished in second place at Pro Tour Venice and later went on to win Grand Prix London in the hands of Diego Ostrovich. Both tournaments were Onslaught Block Constructed but that format is usually a harbinger of things to come in the subsequent Standard environment. Blue-green Madness was a dominant block deck that went on to become a fixture in Standard over the following season. Goblins experienced on-again off-again success throughout the Pro Tour Qualifier season due to pesky Silver Knights. As mentioned earlier, the addition of Pyrite Spellbomb gives the goblin deck a colorless answer it did not have previously.

The other dominant deck from last year's Block Constructed format-playing Psychatog to Goblin's Blue-Green Madness-was Astral Slide. Osyp Lebedowicz won Pro Tour Venice with an Astral Slide deck by defeating Tomi Walamies' Goblin deck. Going into Venice, Goblins were the heavy favorite and Osyp's deck accounted for this with two maindeck Gempalm Incinerators with another two lurking in the wings for games two and three. With a Lightning Rift in play this was potentially three for one card advantage against a goblin deck.

Later on that season, a three color Astral Slide deck would win the Junior Super Series Championships in the hands of Mitch Towner and an almost identical version would take second at US Nationals piloted by Gabe Walls. The deck did not bother with Gempalm Incinerators against the goblin deck since it could gain four life every turn with Teroh's Faithful - a card no longer available for the upcoming Standard format.

In addition to the loss of Teroh's Faithful the deck can no longer play with Nantuko Monastery. Sideboard aside, those are the only two cards lost in this deck. The lands can be easily replaced and the Faithful can become goblin hating Incinerators. The reason I have highlighted the three color version of this deck (besides the fact that it took 1st place and 2nd place at JSS and Nationals respectively) is because of the possibility of adding Viridian Shaman to either the main deck or sideboard.

Stabilizer is obviously a powerful card against this deck. Break Asunder is a nice answer that also cycles but the Shaman provides a renewable source of artifact destruction with Astral Slide. Chrome Mox is sure to be a staple card at these events and Mirrodin will surely provide any number of artifacts to destroy including lands. I don't know if it is maindeck worthy but it will certainly occupy some slots in the sideboard.

There has been a lot of speculation about adding Solemn Simulacrum to this deck. Each time the invitational card returns to play from under an Astral Slide it will search out another land Is a 2/2 for four mana going to be good enough? It provides valuable mana-fixing that is not green. The deck's mana had to wrestle with the fact that it's mana-fixing was in it's third color. We will no doubt be taking a more in depth look at this fellow in an upcoming column.

Mono-White Control made a name for itself beating up on goblins during the last PTQ season and should only get better with a four mana Wrath of God as opposed to the six mana that Onslaught Block dictated. Pyrite Spellbomb kills Silver Knight dead but the deck is not without answers. The Spellbomb is an on table trick-you can't help but see it coming. Dragon Scales is one way to overcome that as is Damping Matrix. The latter also shuts down many of the tricks the goblin deck employs like Goblin Sharpshooter, making Clickslither trample over Silver Knight, and the sacrifice ability of the Siege-Gang Commander. Additionally, Dawn Elemental - Worship is an almost impossible combo for a goblin deck to overcome.

Derek's deck listed above may not have won the event like the other decks we have looked at but it was a popular choice throughout the PTQ season and qualified a number of players for the upcoming Pro Tour in New Orleans. Bob Maher went on to win that Grand Prix with a Red-White 'slideless slide' deck called Bad Form. The deck did not go onto to accomplish much else during the PTQ season and it's success was chalked up to the fact that Bob Maher Jr. is an exceptional player and was either able to understand the deck on a deeper level than anyone else of be good enough to win with an Astral Slide deck that had no Astral Slides.

There were a handful of other decks that made some noise like Zombie Bidding and a Blue-White control deck that utilized the unwieldy counter magic of the block. I will be taking a look at the latter deck in the third installment of this series. Next week I will try to look into my crystal ball and look at some of the new decks that might be viable for these upcoming tournaments.

To get started, here are some rough updates for a few of the decks we looked at in this article. These are not the builds I would be taking to States but rather a starting point for playtesting.