A Mana for Your Thoughts

week’s preview card is about two-for-ones. To begin with, the card itself allows you to draw two cards. Second, in addition to a card preview I am also going to introduce you to the newest mechanic—fresh off of the assembly line—for the Mirrodin block.

During the last round of Scourge previews I had the opportunity to introduce you to Rush of Knowledge. One of the questions that I addressed in the article was whether or not a five mana sorcery card-drawer would see play in Constructed. I am glad to report that Rush did indeed turn out to be every bit the Limited powerhouse I was expecting it to be, but it has yet to see any high-level tournament play in Constructed and it is unlikely that it will ever happen.

This week I am here to report that there is a card drawer with the same mana cost as Rush that will almost certainly see use in Constructed. It doesn’t even have the tremendous upside that Rush offers—allowing you to draw six cards on turn five with an ideal draw. This week’s card will only draw you two cards when you play it. The amount of mana you actually pay for it is not quite as fixed a variable, though. 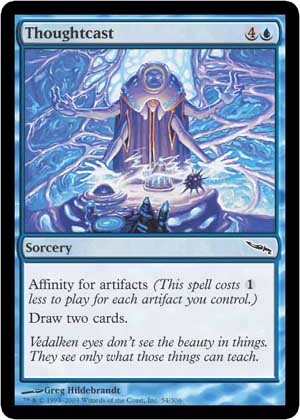 While Rush of Knowledge was completely dependent on you having a non-land permanent in play for you to draw any cards at all, that will never be the case with Thoughtcast. At the very least you can just tap five mana and dig two cards deeper for something to help you out of your apparent mana flood. Tapping five mana will not be the norm, however.

It is no secret that Mirrodin is the "artifact set" and it is reasonable to assume that an artifact set will contain mana acceleration. One of the problems with mana acceleration is that you have to invest cards from your hand to augment your mana base. Thoughtcast will help to restock your hand while taking double advantage of the artifact mana. Not only will you have the extra mana but also each artifact in play on your side of the table will reduce the casting cost of Thoughtcast by

. Welcome to the bold new world of affinity.

Randy already introduced the intriguing (and double-edged) artifact lands in last week’s column. Imagine that you have one of the artifact lands in play along with a basic land. You also have, say, a Mox Diamond and a Mind Stone on turn two. Thoughtcast would only cost

to play and you would be able to draw two cards and still have two mana left to spare. I would be more than surprised to find that a year from now most Mirrodin block constructed decks with access to blue mana weren’t running at least a few copies of this spell. It will be regularly played for

and often for a mere

It is important to note that your opponent cannot "force" you to pay more mana for an affinity spell by destroying one of your artifacts in response to you playing it. Unlike Rush of Knowledge, which looks for your highest costed permanent upon resolution, allowing your opponent to bounce or burn one of your permanents to make you draw less cards when the spell resolved, affinity affects the mana cost, which is fixed upon declaration of the spell. When you announce the spell it checks how many artifacts are in play right then and there is no opportunity for anyone to respond in a way that will affect affinity. (If you are confused by this, wait for the Mirrodin FAQ on this site.)

Because I can't fully predict Mirrodin's impact on a post-Odyssey environment, I am not sure how much we will see of this card in Standard. It usually takes at least one set rotation before the block constructed decks make the leap into the deep end of the Standard pool. On the other hand, Mirrodin is throwing a number of high quality artifacts into the mix. (by the way, the imprint artifact I was referring to last week was Isochron Scepter. I missed the part about the instant that you imprint having to have a converted mana cost of 2 or less. I had visions of discarding Hunting Pack, Spelljack, or a post-sideboarded Slay or Execute. It is still a very powerful card—and only an uncommon—but not the insanity on a stick I thought at first.) It is quite possible that Thoughtcast will be called upon to fill the void left by the rotation of Deep Analysis. It is in no way as good as Deep Analysis but in the right deck the ability to draw two cards for two or three mana cannot be overlooked.

On the basis of Thoughtcast I will be planning on drafting blue in this set for the foreseeable future. In Limited I expect this card to be a powerhouse. It is in no way as game breaking as a Rush of Knowledge off of a Daru Lancer on turn five but it should play a familiar role for blue mages. As I mentioned earlier, when you implement a mana acceleration strategy you do so at the expense of the cards in your hand. In order to play out big flashy spells turns earlier than you would normally be able to you have to commit more cards to the board and more eggs to your big flashy basket. In Mirrodin limited all of the players will have access to this acceleration but only the blue player will be able to recoup those cards with Thoughtcast. I fully expect to be playing this spell for

all day long at the prerelease.

There are more cards with affinity in the set although and they are all fond of artifacts but it is an open-ended mechanic. I can potentially see affinity being tweaked in the subsequent expansions to other factors such as creatures, enchantments or even cards in hand. I think it is a very interesting new twist on the game that will force you to think about the components of your deck in the same way you have to contemplate your mana base. Not only do you have to concern yourself with the mana requirements for your spells but if you are playing enough artifacts to play them inexpensively.

Make sure to tune in next week—we’re going to have a blast!