Posted in Learning Curve on September 3, 2003

week's Mirrodin preview card can trace its lineage all the way back to GenCon '93 and the release of Alpha edition Magic. We'll get to the card in a bit; but first, a look at its predecessors. Mana Flare was the first card to double a player's mana output and has become the shorthand term for the mechanic. (For example: Vernal Bloom is "Mana Flare for Forests," Mirari's Wake is "Glorious Anthem and Mana Flare for you," etc.)

While Mana Flare has always been a popular card in more casual circles, it has, for the most part, never been a competitive tournament card. The reason for its varying degrees of popularity is its symmetry. Since all players are affected by Mana Flare the person who plays it is pretty popular in a multiplayer game. On the other hand, in a duel your opponent gets to take the first turn under the Mana Flare's influence and you can never really know how that will work out.

To be fair, Mana Flare has seen a small amount of tourney play. Its fifteen minutes of fame came after the release of the Urza's Block free spells—Palinchron in particular. With the ability to produce twelve mana off of six lands thanks to Mana Flare, a Palinchron would power up an infinite-mana engine since it only takes eleven to play and return the creature—netting you at least one mana per iteration. The resulting deck was cleverly known as "Palinflare" but other than that brief flirtation with popularity, Mana Flare has continued to hang out in the back schoolyard with the other misfits and fascinating also-rans like Zur's Wierding, Intruder Alarm, Upwelling, and Molly Ringwald.

The Flare has undergone a number of makeovers with varying degrees of success. Vernal Bloom came along to reward players for playing with Forests but green really hadn't gotten good yet so that never quite came together. The most successful attempts have come recently and will be rotated out of Standard with the release of Mirrodin. The Swamp-rewarding Cabal Coffers did not quite allow you to double your mana but it was close. More importantly, it offered no symmetry whatsoever. It was also a land, narrowing the available options for dealing with it to almost nothing (compared to the arsenal of options available for dispatching enchantments).

When the most successful incarnation of Mana Flare rotates out of Standard the format will breathe a sigh of relief. Mirari's Wake is asymmetry at its most powerful. At the recent World Championships more than half the Top 8 were playing the enchantment and in Daniel Zink's hands it took home the trophy. If you get to untap with Mirari's Wake in play you will probably win (although it could take a while). The deck uses its surplus of mana to dig for a small array of win conditions with Deep Analysis, Concentrate, and Compulsion.

It can be a frustrating deck to play with or against but there is no denying that the mana advantage the deck generates plays a significant role in its dominance. With the Mirrodin Block displacing the Odyssey block, Mana Flare fans will have to look elsewhere for their mana advantage. They may very well find themselves looking through an Extraplanar Lens. 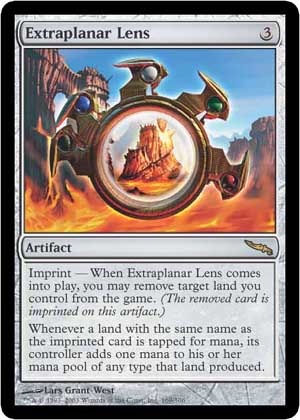 Like the Soul Foundry that Mark previewed on Monday, the Lens uses the new imprint mechanic. Unlike Mark's preview card, the card you remove from the game for the purposes of imprinting the Lens does not come from your hand. Instead you remove a land in play. Since it is most likely to be one that you tapped to play the Lens in the first place, it is not that painful. Assuming you are playing a mono-colored deck you will more than make up for that lost land when you untap.

Now every color has access to their own personal Cabal Coffers. Lens is actually a turn faster than Coffers when you do the math. On turn four you could only make four mana with a Coffers and three Swamps. It jumped up to six on the next turn and a whopping eight mana on turn six. In a mono-white deck, however, a turn three Lens will power out a turn four Exalted Angel played straight-up and a turn five Akroma. If you are not playing a mono-color deck—well what the heck are you doing playing with the Lens then? That would be like playing Cabal Coffers in a deck that didn't feature only Swamps as its additional lands.

On the downside of the Extraplanar Lens, you have to be concerned that your opponent can make the card symmetrical. In order to do that, he only needs to be playing the same land type as you and even then he needs to be playing a mono-color deck as well to take advantage. Another downside is that the Lens is being introduced in the midst of a set of other powerful artifacts. You need only look back at Soul Foundry to realize there will be a fair amount of artifact hate running around once Mirrodin hits the tournament scene. In fact, there might even be a few artifact hosers waiting in the wings with this artifact based set, including a couple that have a long tradition of seeing tournament play. If your opponent can destroy your Lens before you get to untap, it could be crippling. Your Mana Flare will have become a Stone Rain targeting yourself, as you don't get the imprinted card back.

When I first saw this card I thought about the original dual lands and the recently reprinted Invasion lands. I had visions of playing the Lens in a two-color deck. A quick reread of the spoiler clarified that the imprint affects the specific card name, not the type of mana it produces. Only Shivan Oasis would produce extra mana if one were removed with the Lens, not all red and green lands. Since you can only have three more copies of a nonbasic land in your deck in addition to the removed copy it seems like a bad plan. Mark pointed out in his preview that if the imprinted card is fetched with a Living Wish or Ring of Ma'ruf then that would erase the imprint on the card. (How much fun would it be to Word of Command someone holding a Living Wish? "Please un-imprint your Lens.")

Also from the fun department… My opening bit about playing Mana Flare in multiplayer got me thinking. How good is Extraplanar Lens in the Emperor format? Both of your flankers would be under the influence of the Lens provided the whole team was playing decks of the same one color. Plus, your opponents could not deal with the card until after they had dispatched a flanker.

If you are wondering whether or not Mark and I have blown all the good imprint cards for you, fear not. There are still a couple of bombs waiting to be dropped. There is one card in particular that I keep thinking must be a misprint but I am assured that it is not. Stay tuned to MagicTheGathering.com and Sideboard.com for more previews and don't forget to check out your local prerelease tournaments.

Posted in Learning Curve on September 3, 2003