think Mark Rosewater perfectly captured the Magic community’s reaction to indestructibility in his preview of Myr Matrix on Monday. I was doing a Darksteel preview article for Undefeated Magazine and when I was talking to Henry Stern about the new set I must have asked him each of the questions Mark hypothesized were going through everyone’s minds when first confronted with the concept of indestructible cards.

On the surface Mirrodin block appears to be artifact themed but if you look at some of the cards they have printed it appears that the theme is actually about breaking the rules of Magic as we knew them. Imprint was a startling new mechanic that has left many a player desolate as he was locked under an Isochron Scepter with Boomerang, Orim’s Chant or Fire/Ice on it. In one game I saw over the weekend, one player had his opponent locked under three scepters with one of each of those card imprinted.

Platinum Angel has added a fresh new dimension to the game and has created situations where players are keeping track of negative life totals. Insane, right? Well, what is more insane than Mindslaver? I had the opportunity to activate a Mindslaver on my opponent in an Extended tournament pre-bannings. I cast a second turn Metalworker and was able to cast and activate a Mindslaver on my next turn. My opponent had only two Mountains in play. He drew a Burning Wish on his/my next turn and his hand featured two Chrome Mox, two Enlightened Tutor, Seal of Cleansing and a land to go with the Wish. I cast both Moxes imprinting one of the Tutors and a Seal of Cleansing. I used the remaining tutor to look at his deck and find nothing. I then cast Burning Wish for a Pulverize in his sideboard and sacrificed both of his Mountains to pay it’s alternative casting cost. I lost my Metalworker but he had only one land in hand and nothing on the board.

Like I said, Mirrodin block has enabled some insane things to happen within the confines of a game of Magic. Now we have indestructible cards. And in today’s preview card we also have an alternative way to win a game of Magic. 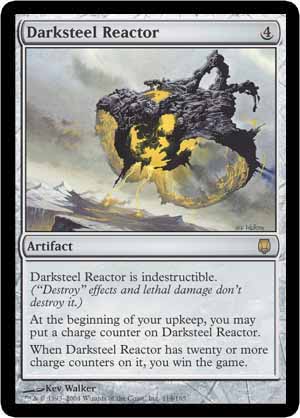 Alternative win conditions are nothing new. I guess the earliest AWC I can recall was poison counters (if you don’t count decking!). Probably the most successful AWC would have to be Battle of Wits. Less successful—at least on a tournament level—were Mortal Combat, Chance Encounter, Epic Struggle, Goblin Bomb and Test of Endurance. Coalition Victory has lived up to the latter half of it’s name on rare occasion but for the most part it gets lumped in with the others. As for The Cheese Stands Alone well… it stands alone.

One of the biggest problems that many of the enchantment based AWC’s faced was that even if you made the tremendous effort to produce the win condition required a well timed Disenchant could ruin your whole day. Enter the Darksteel Reactor.

Twenty turns after you plop this bad boy down you will win the game. Provided, of course, that you can live that long. The good news is that you don’t really need any other win condition and can dedicate the rest of your deck to staying alive. You barely need anything to protect your Darksteel Reactor. There are a minimum of cards that can remove it from the game and as long as you can kill a Molder Slug there is little you need to worry about in terms of being forced to sacrifice it. There are sure to be some new cards that will offer indestructible cards resistance in Darksteel but for the time being we will just worry about what we know.

As I mentioned before the deck will probably look radically different once we know all the contents of Darksteel but you get the idea. I would probably have Razor Barrier in the sideboard for Altar’s Light. Given the likelihood having to cope with other indestructible artifacts I would also run Altar’s Light in my board as well but beyond that I haven’t given the sideboard much thought.

The Temple of the False Gods will help you with bringing your Eternal Dragons and Hammers back from the graveyard and they also help you to power up an Obliterate. You should be able to dominate any creature based match-ups and the combination of Darksteel Reactor and Obliterate should foil most U/W decks. A deck that would give you the most trouble would be any deck with spell based damage such as burn or—more likely—Consume Spirit.

Of course you could run a more combo based version of the deck with Power Conduit and Quicksilver Fountain. The idea would be to deny your opponent access to any mana other than blue and keep shunting counters from your lands to your Darksteel Reactor to win more quickly. You could even put out another Reactor alongside a Conduit and double up the counters from one Reactor to the other. Fabricate could search out combo pieces and you could slow down the early game with countermagic. 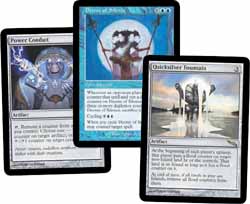 I am more excited about the second deck in terms of having fun but I like it considerably less in a tournament environment where your cards are going to be less useful individually. Power Conduit and Quicksilver Fountain don’t do much on their own while in the first deck all of the cards did something on their own that should be relevant to almost any match in the current Standard environment.

I don’t know if these decks will make the cut in the tournament environment when the set is finally released at the end of the month. I think they will see a lot of play in more casual settings and I expect there to be heavy trade activity for Darksteel Reactors at the prerelease. I will certainly be testing the card in a number of different ways between now and then. If all goes well, I might be the person trading for them.