A River of Scry 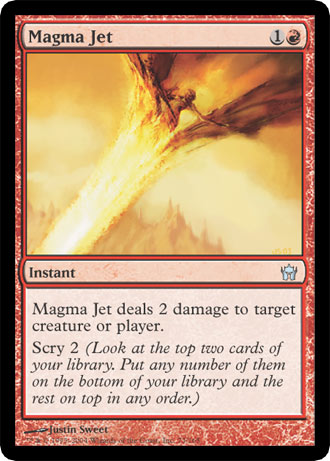 how do you like Scry? Mark Rosewater introduced the mechanic in his Monday column with a peek at Magma Jet. I am a big fan of this mechanic and I hope that the unrevealed cards that exploit this new mechanic are as useful as Monday's preview card. Scry generates no card advantage but is the epitome of card selection, an often overlooked component of the game. It allows you to push past dead draws finding lands when needed and shipping them to the bottom of your deck when they are not. The idea that this nifty little effect is part of an inexpensive and useful removal spell is very exciting and bodes well for the new mechanic. Wouldn't it be great if there was a Counterspell that had Scrying? Or a Disenchant? Or Wrath of God?

Well, actually there is…sort of. (Cue the preview card) 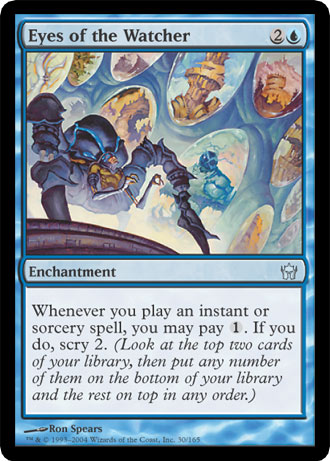 With this intriguing enchantment in play you can use your excess available mana to dig though your deck anytime you play an instant or sorcery. I had mixed feelings about this card at first since it will rarely do anything on the turn it is cast. On the other hand in the right deck the quality of your draws after a few turns of spellcasting should be excellent. Eyes of the Watcher is clearly not going to fit into just any pile of sixty cards but I was certain that it would find a deck to call home.

My first thought was a counter burn deck. Something red-blue that is always looking for its next spell. Combined with other cheap blue cards that rip through your deck like Opt or Sleight of Hand you could probably put together a fun little deck that once it got rolling would always have the right answer to any situation. MaRo already revealed a new Power Sink called Condescend that has Scry and while you are at it you could even throw Magma Jet into the mix. You could actually Scry for 4 when you cast either with Eyes of the Watcher in play—actually you would Scry for 2 and then Scry for 2 again which is very different than Scrying for 4 but if you didn't like the first two cards it would be like Scrying for 4…but I digress.

My next thought was combo and it was quickly followed by an image of a Rampant Growth. Rampant Growth seemed like a great card to play in a deck that wants to pay an extra mana when it casts its spells. Hmmm…a blue-green combo deck with Rampant Growth? Eyes of the Watcher? Sounds like a perfect time to whip out Tight Sight.

Tight Sight is one of my favorite decks. It started somewhere in Japan and I started working on it with a group of friends from Neutral Ground. It became part of the tournament landscape when Gerard Fabiano played a slightly altered version at the Gateway tournament for the Chicago Masters a while back. At the time the format was Standard although now it would have to be considered Extended. Here is the version he played.

Somewhere along the way after Mind's Desire saw print the deck was adopted by the Germans for Nationals and Worlds. Just this past week Kai Budde played a version of the deck at the Magic Invitational during the Online Extended portion of the competition. 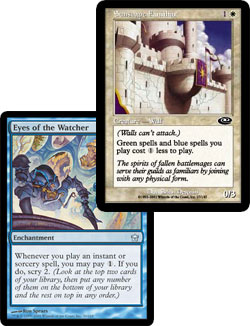 I think you could fit the card into Kai's build, perhaps by replacing one Memory Lapse and one Future Sight for a pair of Eyes. The Sunscape Familiar and the Eyes of the Watcher have some funny interactions, reducing the cost of the blue or green spells so you can pay one more to activate your Eyes. The card is clearly ridiculous if it is in play at the same time as a Future Sight. I can't even imagine how broken it must feel to cast Rampant Growth off the top of your deck and then Scry into an Early Harvest and Scry into Mind's Desire and then Scry into… Well, I am sure you get the idea.

While we are talking Extended—online or otherwise—I can easily see this card fitting into a Psychatog deck or any blue-black control deck. Innocent Blood and Ghastly Demise are still easy to cast at two mana and a Counterspell for three is still cheaper than any of the current Standard options for a hard counter. Basically any deck with a specific kill card and plenty of spells would be an ideal home for this enchantment.

Last week I wrote about a Standard combo deck I encountered at Regionals that featured Brain Freeze. It may be possible to improve the deck with Eyes of the Watcher although we probably need a couple of additional spells as well.

2 Eyes of the Watcher

It is difficult to squeeze in more than two or three copies of the enchantment although in the right deck you might be able to run four. Once you have the first one in play you should be able to Scry past the remaining copies. This deck only has seventeen spells that activate the triggered ability of the Eyes so I was loathe to cut any to fit more copies of the enchantments in.

Next week: Fifth Dawn will be fully revealed and we may find some better cards to combo with this intriguing new enchantment. We will start to look at what impact Fifth Dawn might have on Constructed and I'll share my Prerelease experience with you as I am likely going to be at the Midnight prerelease in New York at Neutral Ground. I probably don't have to say this too much for this column's crowd, but if you've never been to a prerelease trust me when I say you're really missing out. Shameless plug time, take a look at my prerelease primer on the site this week and then get out there and play!