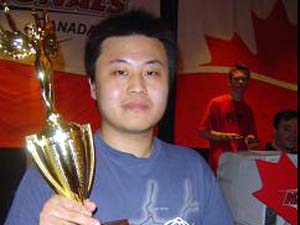 2004 Canadian National Champion, Jingpeng Zhang just got back from covering Canadian Nationals and I've got decklists. There were three separate Block Constructed events that were run alongside the big event—two Grand Prix Trials and one PTQ. Each of the events had somewhere between forty and sixty participants and I have each and every one of the decklists spread about my office broken down by event and deck type.

When we look at the results from tournaments it is very easy to just focus on the Top 8 but there is a bigger picture to consider. It's not enough to know that blue-green won the tournament. You also want to know how many blue-green decks were in the tournament. What did the rest of the field look like? Was there much Affinity? We throw the term 'metagame' around quite liberally in regards to Top 8 decklists but those eight players are just the tip of the metagame iceberg.

Don't worry, there will be twenty-four decklists when this article is read and done but I am going to approach the tournaments in the order they occurred over the weekend and breakdown which decks were played in what quantity and try to help you arm yourself for the upcoming PTQs, Grand Prix Trials, and Friday Night Magic Block Constructed tournaments in your area. With an accurate picture of what you are likely to face in the rounds preceding the Top 8 you can hopefully improve your chances of getting to the top of iceberg.

The first event of the weekend was held on Friday and was a thirty-eight player Trial for Grand Prix Orlando. This event took place during the opening rounds of Canadian Nationals and was the smallest of the three events. The player pool was largely made up of players who failed to grind into the tournament the night before—including former Canadian National Team member Jon Stern.

4 Beacon of Creation 3 Pulse of the Tangle

1 Bringer of the White Dawn
53 Cards

Lincoln Panosy's Big Red deck led a pack of five such decks and was the only one to make the Top 8. All of the decks featured some number of Furnace Dragons and the requisite artifact mana to power it up. Lincoln was the only player of the five to max out at four copies each of the Dragon and Seething Song—something that gave him a game one edge against Affinity and Ironworks decks. He was also the only player to run Furnace Whelp. The other decks were running Fireball in the slot that the Whelp occupied in Lincoln's deck.

Jon Stern was the front-runner of this group with his finals appearance. More than half of the Affinity decks in the tournament made it to the elimination rounds; pretty impressive when you consider the amount of hate these decks have to combat. Almost every deck that was not Affinity or Ironworks was running cards specifically included to fight Affinity and Ironworks. Whether they have Furnace Dragons, some cocktail of green removal, or March of the Machines, every deck is gunning for those two decks. They were obviously successful in dealing with the latter but the former just keeps on keeping on.

The Affinity deck is fast and consistent. Cranial Plating is ridiculous and if your opponent stumbles for even a turn you can sneak in and take away half their life with one swing of an Ornithopter. Jon Stern was running four Somber Hoverguards which gave him a non-artifact threat with evasion. The mono-green decks have few answers for a blue flier even if they can destroy everything else in the deck.

Leslie Ross' deck was the only one of three mono-green decks to make the Top 8. His was the only one of the three to run 100% Forests for his mana-base. The other two decks featured four copies each of Blinkmoth Nexus—an answer to the aforementioned Somber Hoverguard. It is interesting to note that Leslie fell to Jon Stern and his Somber Hoverguards in the semifinals.

Last week I became dizzied by all the decklists and criticized JD House for not playing Echoing Courage over Predator's Strike in his mono-green deck. I was critical because of Echoing Courage's combolicious interactions with Beacon of Creation. One small problem…JD was not playing the Beacon :( That said, I don't know why Leslie Ross chose to play Giant Growth over Overrun but you can't argue with success.

Tooth and Nail carried forty percent of its players into the Top 8. Robert Anderson's version was mono-green and featured a pair of untargetable Slagwurms for his opponents to cope with. He also ran four copies of Mindslaver with the hard lock in the sideboard—Bringer of the White Dawn. William Chong also had four Mindslavers but he split them evenly between the deck and sideboard with a Bringer for games two and three. He also touched white for Leonin Abunas.

Certainly one of the most popular decks to discuss online over the past week has been the blue-green deck that emerged from Grand Prix Zurich. Five people ran the deck—as many people that ran any deck archetype to make the Top 8—and only Justin Howard made the Top 8. All of the decklists were pretty similar with some decks trying to work in Mirrodin's Core for more consistent mana. Justin's deck cut back on the mana from the Zurich deck and tried to 'cheat' with Serum Visions. He also added Acquire to the sideboard. Cirigliano lost in the finals to Tooth and Nail and if you can't beat a Darksteel Colossus you might as well steal 'em.

The rest of the field

All four decks featured the Myr Incubator/Goblin Charbelcher combo for the kill—two of them featured Fireball backup. Ironworks has been remarkably quiet to this point in the format but it is probably too soon to count the deck out. Combo decks generally take a few weeks to coalesce into their dominant form. They also take a few weeks for players to puzzle out all the interactions and the sideboard options. On the other hand, they don't have any pressure until the turn they go off and the prudent application of artifact hate may be enough to keep them from rising to the top.

There were three types of builds in the tournament. Two were blue-black with Thirst for Knowledge and Night's Whisper to dig into the March of the Machines-Mycosynth Lattice combo. Another of the decks was red-blue and featured spot removal in Magma Jet and Shatter. The final deck was an intriguing mono-blue build that accelerated its mana with Gilded Lotus and Vedalken Engineer. It also featured one copy of Culling Scales that it could Fabricate for. While these decks can just get the turn four concession from Affinity and Ironworks with a March of the Machines I suspect their combo is just too slow to go toe to toe with the rest of the field.

One of the more interesting decks to fall by the wayside is a blue-white Pristine Angel deck that also featured Abunas, Vedalken Shackles, and March of the Machines that was similar to the deck Kyle Smith Top 8'd with at Origins last week. I did not include it in the above category because those decks were relying on the March/Lattice combo as their kill mechanic while this deck was a different animal. More on this deck from the next tournament.

Saturday's affair was a fifty-two person tournament, the spike in numbers coming from the number of players dropping from the main event plus having the event on a weekend. The Top 8 looked similar to the previous day's event with one notable addition.

2 March of the Machines

Just fewer than twenty percent of the field decided to run Big Red. It won in Kobe, it won the day before, and it won again in this trial. Both versions that made it to the Top 8 rose to the very top and met in the finals. Paul Russell added Megatog to his build, giving him something to do with his artifacts when his Furnace Dragon wasn't blowing them all up. Greg Darkoff chose to run Furnace Whelp in that slot. Who wins in a fight?

I don't know if I have seen a Top 8 in this format without an Affinity deck yet. Charles Starling was the only player to make it into the elimination rounds but the numbers are such that you can't expect to not face one of these decks over the course of a PTQ—although you are more likely to be facing blue-green or mono-red at this point. Does this mean that Affinity hate starts to drift back into the sideboard?

Of the eight such decks in the format Michael Abromovich chose not to use Crystal Shard. He was content with abusing his cards with Eternal Witness and Echoing Truth while beating down with maindeck Troll Ascetics. The only targets in his deck for artifact destruction were Wayfarer's Bauble and Solemn Simulacrums—the first is unlikely to happen and the second draws him a card.

This was the most successful deck in terms of placing players in the Top 8. One-third of the players with the deck made the Top 8. All thre