The Trouble with Legends

A massive network outage here in Washington kept us from our normal update schedule. Apologies to Brian and his readers. --Aaron

remember when Buried Alive was Buried Alive in Weatherlight. I had an exciting idea for a deck and I hurriedly threw it together for a tournament at Neutral Ground. My first round opponent had seen me scrambling about for cards and was trying to puzzle out what heinous combo I had stumbled across. He badgered me with questions but I wasn't going to tell him—especially when I looked at my hand and saw the turn-five kill awaiting me. He was going to have to wait and see the deck in action.

On the fourth turn I played Buried Alive and put three copies of Spirit of the Night into my graveyard. The Spirit is only a couple of abilities shy of being Akroma and my opponent gave me an arched eyebrow and carefully read and reread Spirit of the Night trying to anticipate what was coming next. He reluctantly sent the turn back to me unsure of what was up and I used a burn spell to drop him to eighteen.

I rubbed my hands together, cracked my neck and drew for the turn savoring the buildup to my kill. I played my fifth land and triumphantly announced Living Death. My opponent was stunned; he put his creatures in the graveyard and we both started pawing through out graveyards and I pulled out my Spirit of the Nights and plunked them into play with a triumphant grin. My foe blinked a couple of times but made no move to pack up his cards. “Spirit of the Night is unaffected by summoning sickness,” I explained awkwardly, hoping that someone—anyone—would find a tidier phrase that that clumsy mouthful.

“Spirit of the Night is a Legend,” my adversary explained with the same patient tone one would use to explain to child about why he can't keep the mangy squirrel from the park as a pet. He calmly scooped up my Legends and put them back in the graveyard for me. I didn't even get to keep one of them since they came into play at the same time and were all subject to legendary burial.

That was my first thought when Aaron announced Legend Week. I thought about the subject some more and I realized that Legend cards have never seen more constructed play in other period of Magic's ten year history than they are currently experiencing. Regulars on the constructed scene include Braids, Cabal Minion; Akroma, Angel of Wrath; Rorix Bladewing; Silvos, Rogue Elemental; Visara the Dreadful; Kamahl, Fist of Krosa and Arcanis the Omnipotent. I'm sure I am overlooking a handful but even this likely-incomplete list has more commas than you would have expected coming into the block. Braids is the only Legend not from Onslaught Block on that list. Clearly the designers of Onslaught wanted tournament-playable Legends and they made them in spades.

The interesting challenge that arises when tournament-playable Legends exist is trying to figure out how many to play. Normally when you have a key card in your deck you crave redundancy and want as many copies as possible to insure that you draw it when the time is right. The problem with Legends is you usually don't want to see two copies of the same one sitting in your hand.

Currently the most popular legend has to be Akroma, Angel of Wrath. She is dominating the PTQ scene and it is interesting to watch people tweak their numbers accordingly. Players who were playing one or two copies of the Angel are now playing two or three, sometimes with a backup copy in the sideboard. If both players are running the same Legend the player who can get his copy into play first is at a tremendous advantage, especially with an expensive legend like Akroma. Almost all of the answers cost too much mana for the person on the receiving end of the Akroma to do much else on his turn.

Legends are funny sometimes. They can put you in awkward situations and force you to rethink how you play the game. There was a fascinating situation that came up at Pro Tour – Venice. William Jensen is one of the sharpest guys on the Tour and he was facing off against Osyp Lebedowicz in the semifinals. Jensen's deck was green-white while Osyp was playing red-white Slide. Osyp played an Akroma and began attacking a frustrated Jensen. Jensen had been stuck at seven mana for a few turns and was holding two copies of Akroma that were now a double mulligan. Jensen was faced with a difficult choice. He was holding an Oblation and he could make Osyp shuffle the Angel back into his deck but give him the opportunity to draw two cards. He would be gambling that he would draw a land before Osyp would redraw an Akroma.

Fearing Akroma's Blessing—a staple Slide card that Osyp still had a full arsenal of late in the game—Jensen took the gamble and it backfired on him. Osyp was holding another Akroma and Jensen did not find his eighth land in his small window of opportunity. Jensen made the right play it just didn't work out for him that time. He was an unfortunate victim of Legendary status.

While the red-white Slide deck continues to dominate, the green-white deck that Jensen played is not a large factor in the current PTQ season having been supplanted with Mono-White Control. Interestingly, I have seen quite a few of the mono-white players in my area siding in Astral Slide for the mirror match because it serves double duty. In addition to removing your opponent's Legend and allowing you to play yours—nicely killing theirs when it comes back—but it serves as an insurance policy against your opponent killing your angel. Still, with an eight mana cost no one has started running four copies of Akroma…at least not yet anyway.

To the best of my recollection there have only been two legends that achieved four-of status in constructed decks. The first was Lin Sivvi, Defiant Hero. Lin Sivvi was the gleaming chrome engine that fired up the Rebel decks that so dominated Pro Tour - New York 2000 that she was promptly banned in Masques Block Constructed. There were so many Rebel decks in that tournament that it was crucial to get your Lin Sivvi into play first. Some decks featured fewer than the maximum number allowable because they could search her out with their cheaper rebels.

Lin Sivvi only costs three mana to play as opposed to four to search out. A deck that was relying on searching out a copy on turn four would be at a disadvantage against a deck that could just play her straight up on turn three. It is not a coincidence that all four of the pure Rebel decks that made the Top 8 at that tournament were using four copies of the Legendary Rebel.

The other Legend to achieve four of status is Braids, Cabal Minion. Unlike other Legends, Braids' unique ability that forces you to sacrifice a creature, land or artifact means you are never really stuck with multiple Braids in hand. With multiple Braids, the first one or two become more like Misguided Rages than creatures. I played a black-white Braids deck a little while back at a Grudge Match finals event. Alex Shvartsman had a similar deck, which he dubbed "Noir" and that has become the popular name for this archetype. His build only included three copies of the Cabal Minion so I have included my list as opposed to his.

Next week is when things start to heat up around here. Mirrodin previews are on the way! 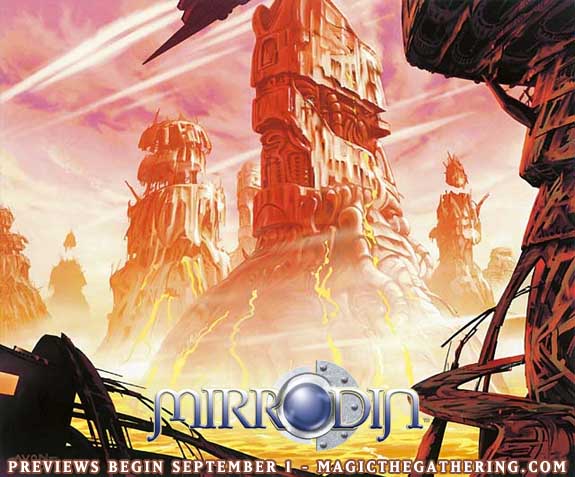