Under The Cloak Of Darksteel 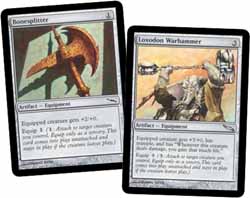 have not seen much of Darksteel. I have deliberately only seen cards that I am previewing or are being previewed in order to be able to play at the upcoming Prerelease tournaments. I know as much about the set as you do (actually, probably less than you do). It has been months since our introduction to the Mirrodin block and I doubt a week has gone by where I have not drafted the set. It has been fascinating to watch the value of cards rise and dip over that short span of time. No subsection of cards has seen more wild fluctuation than Equipment. It is understandable. Equipment was a brand new type of card with a fresh new effect on the game when they hit play.

Bonesplitter and Loxodon Warhammer did not take very long to puzzle out. I remember doing my first draft and being greeted by the sight of each of these two in my very first pack. I eventually chose the game-breaking Warhammer and was—predictably—quite pleased with the results. After that first draft I asked a few friends about what they would have taken faced with the same choice. Opinions were split and a number of people were put off by the six mana it would take to play the Warhammer and equip it.

Needless to say they were all quickly on board with the Warhammer plan. Other cards have been slower to take hold. Mask of Memory is a good example. I remember doing coverage of Grand Prix Kansas City when Ken Krouner nearly fell out of his chair as a Mask of Memory made its way around a Rochester Draft table to fall into his waiting arms on the seventh pick. An incredulous Krouner told me later that he could not believe his good fortune and claimed to regularly pick the card over Spikeshot Goblin. A heady claim, I don’t know that I would take it over the Spikeshot but I pick the card very highly. I take it over any other equipment short of the Warhammer. Clearly other people are feeling the same way as I rarely see the card after the third pick in a draft these days.

One piece of equipment that has seen its stock on a tremendous uptick is Neurok Hoversail. In the early days of this draft format it was much-maligned and lumped in with Vorrac Battlehorns as unplayable equipment. Perhaps it was the fact that Kai Budde chose to include the Hoversail in his Atog based Affinity deck in an online article but slowly people have been coming around to the once scoffed at flying equipment.

What is not to like? It only costs one to cast and once it in play you can give almost any creature you control flying. It has practical applications on both sides of the red zone. You can equip up your Fangren Hunter and send it flying over the other side’s blockers and then pass the equipment off to an expendable creature or regenerator to block a critical flier on the counter attack.

My question regarding Darksteel is whether or not people are going to take to today’s preview card as slowly as they did the Hoversail when Mirrodin first came out. 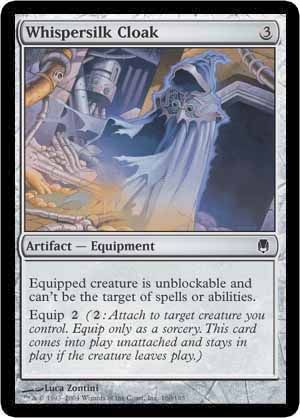 Like the Hoversail, Whispersilk Cloak also gives a creature evasion but in this case it is 100% unblockable evasion. Neurok Spy wishes he was this unblockable. In addition to its Hoversail-like features it also functions as a more expensive Lightning Greaves in terms of making the equipped creature untargetable. Once your creature is equipped they need two cards to dispatch it. One to deal with the Cloak and—failing a favorable ambush block on the table—another to deal with the creature.

The card strikes me as eminently playable in limited and I would not be surprised to see it show up in constructed decks in more casual circles. The card definitely presents a potent Catch-22 for your opponents with Leonin Abunas but I think ultimately the relatively high casting cost will prevent this guy from seeing much in the way of higher level constructed tournament play. If the more economically costed Bonesplitter and Mask of Memory have not caught on yet in Constructed formats what hope does the Cloak have? (Loxodon Warhammer did recently show up in a Top 8 decklist from an Extended PTQ and Lightning Greaves saw more than its fair share of action in the George W. Bosh deck from Pro Tour New Orleans.) 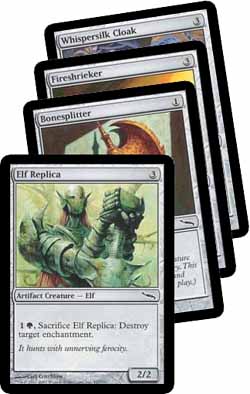 Cloak should really shine in Limited and will combo nicely with any number of cards you will commonly draft. Without even looking into the aspect of unblockability anything that protects your Bonesplittered Spikeshot Goblin while it is keeping your opponent’s creatures off the board is going to be desirable. Any of the Slith creatures that are on color for you will certainly be tempting to play with this card in your deck. I expect to see Arcbound Sliths grabbing this equipment all weekend at the Prerelease.

Like the Hoversail this card is going to be a very attractive card for green drafters. One disadvantage this card has over the Neurok Hoversail is that it does not give you the option of blocking fliers. On the other hand it does not allow your creatures to be blocked by fliers either—I’ll call it a push.

The Whispersilk Cloak can also make your other equipment better. It allows you to put all you eggs in one unblockable, untargetable basket. Whether you are looking to draw cards with Mask of Memory or going for the finishing blow with a Fireshriekered, Bonesplittered Elf Replica the Whispersilk Cloak will make your other equipment operate more efficiently. Although you need to remember that you can’t attach other equipment to your creature while it is equipped with the cloak (or a Lightning Greaves for that matter). Attaching equipment targets the creature so you need to pick up the other pieces before the Cloak or move it, attach other equipment, and then move the Cloak back again. It may sound expensive but in a landlocked late game it will certainly be worth it.

While the Cloak may render your creature untargetable the Cloak itself is not. When attacking remember to be wary of instant speed artifact removal—especially with unfavorable blocks waiting on the other side of the table. In a draft that other day, one friend attacked with his Hoversailed Bosh, Iron Golem attempting to fly over a Plated Slagwurm with only one green mana available to his opponent. His opponent had the Turn to Dust and gobbled up the Golem with his 8/8 prompting a flurry of high-fives on the other side of the table. Don’t be that guy.

Hopefully you will be the guy (or the gal) at the Prerelease. I am excited about seeing the whole set and playing with some new cards. I will more than likely be attending the New York prerelease on both Saturday and Sunday (and maybe even the midnight tournament on Friday night/Saturday morning).