Wizards of the Coast is out of the office for the Thanksgiving holiday, and will return with new articles beginning Monday, November 28. In case you missed it, what follows is the article that ran in this slot last week. Have a great weekend, and we’ll see you Monday!

Sonne -- a longtime Pro Player and already a Grand Prix Champion -- may have taken the top honors at last week's big event in Philadelphia, but the story for much of the Grand Prix was the surprising performance of Chris Pikula and his B/W homebrew deck. Eschewing a traditional archetype, Chris, an original member of Team Deadguy, not to mention the smiling face that greets players on Christopher Moeller's Meddling Mage, has spent the last couple of years away from competitive Magic, putting his spellcraft aside in favor of "real life" concerns like marriage, family, and career.

But nobody, as they say, leaves forever.

The announcement of the Pro Tour Hall of Fame, combined with a resurgent interest among Chris's friends in New York, has kindled a flame within the former Invitational Champion that could only be expressed by charging back to the battlefields of Dominia. Pikula decided he was going to make his return at the tantalizingly close Grand Prix Philadelphia. As you know, the format for Philadelphia was Legacy, a largely untouched one for competitive Magic players. Due to its huge card pool, Legacy dwarfs even the cosmopolitan current Extended format in terms of number of viable decks and combinations. Faced with the daunting task of preparing for a tournament with viable decks in the THREE digits, Chris at one point wished that the format were something predictable, like Extended. "I was worried that someone might show up with some super tech that I didn't know about that my deck wouldn't be able to handle."

Ironic, isn't it, that Chris's deck was the one that no one else could beat?

Legacy, the format, is a strange creature. It has a ravenously devoted -- if relatively small -- following of regular players. While other formats, for example Standard or Extended, have tens of thousands of players setting a metagame via hundreds of thousands of States and Qualifier matches week in and week out, Legacy's devotees form ardent opinions based on much smaller data sets with fewer players, and fewer tournaments still. Getting a read on a format that was in a sense defined by its existing adherents but in another sense virginally untouched by Pro level designers was one of the challenges that Chris had to face in attacking Philadelphia. 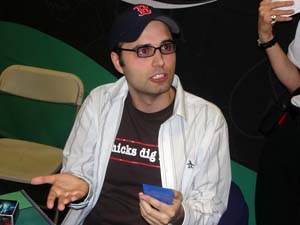 To do so, Pikula scoured the existing Legacy forums on Star City Games, The Source, and other sites. What he found was that one of the few anchors in Legacy is the ubiquitous Goblins deck. The general Pro mentality going in put Goblins into "the best deck" role before the tournament, and Sonne's win with the little Red men did nothing to dispel that assessment. But to call Philadelphia a reaffirmation of the Goblins deck's singular dominance of Legacy rather than "just" its largest scale victory to date may be overstating even that accomplishment. "I went 4-1 against Goblins in the tournament," Pikula points out. "It just happens that my one loss was in the finals of the tournament. More than that, I lost to a world class player... who probably could have taken the title with a cheese sandwich."

To be fair, Pikula got "savagely lucky" against many of his Goblins opponents, showing them GAME ONE first turn Engineered Plague with only two copies of that hateful card main deck. However, the Goblins anchor allowed Chris to set his deck up with systems like recurring Darkblast alongside his Engineered Plagues, or the Withered Wretch strategy -- bringing in a 2/2 for two just to block.

Ultimately, Pikula's deck is a love affair between his highly successful Pikulapotence deck from Pro Tour Dallas and "every bad land destruction deck [he's] ever wanted to play."

It was clear to Chris very quickly that the right color to splash into his "old school disruption" deck was White. This surprised many of his opponents, who expected maybe Green or Red splashes, but White seemed like the best compliment for exactly one reason: Vindicate.

Chris knew he wanted to play with Sinkhole, one of his favorite cards from long ago. In conjunction with Wasteland, Chris could punish bad mana bases and players who kept one or two land hands. Vindicate is a perfect compliment to the land destruction theme; as the cheapest Desert Twister ever printed, Vindicate can play Stone Rain at the exact same mana cost. "I won tons of matches just by manascrew," Pikula recounts. "With a deck like this one, you've just got to expect that. A lot of the time an opponent can draw out of the disruption, the Hymns, but if you put him on one land, there is no way he is coming back."

Unlike the land destruction sub-theme in newer decks like Tsuyoshi Fujita's Boros Deck Wins, Vindicate "doesn't suck." In match-ups where Chris determined that land destruction was not going to cut it, he didn't have to replace eight full spots in his deck... because Vindicate is good against everybody! Had his land destruction been more specifically dedicated -- like Molten Rain or even Pillage in Boros Deck Wins -- Pikula would not have necessarily been able to hold that flexibility.

Chris's success in this event was hardly an overnight phenomenon. On top of his past Pro Tour and Grand Prix performances, the Meddling Mage practiced for this event in several sessions with co-worker (and onetime World Championships Top 8 competitor), Jamie Parke. The sessions were not marathons, but each one helped to tune the homebrew deck productively. Via the first, Chris removed Phyrexian Scuta for his eventual all star, Nantuko Shade. In another, he added the main-deck Engineered Plagues that served him so well in most of his Goblins match-ups. On top of that, Chris's deck performed superbly at a pre-Grand Prix mock tournament at Neutral Ground New York, piloted by New York limited specialist Rich Fein.

"Take out the Funeral Charms," Rich told Chris after going undefeated. "They suck." 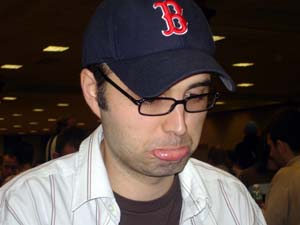 In the process of his forums research, Chris was shocked to learn that Swamps were almost non-existent in other events. He attributes much of his luck in Philadelphia to the fact that his opponents would not, in all likelihood COULD not, have tested against any decks even remotely like his.

Perhaps not surprisingly, no one seemed to like the Deadguy's unusual deck. "I showed my deck to everyone... NOBODY other than me played it. In fact, players seemed out and out dismissive, or even cruel in their assessment of my deck. They were like, 'You're playing WHAT?!?'"

I guess the joke ended up on everyone else. Pikula's homebrew should become a staple of the Legacy format, boasting great percentages against combo decks and a very serviceable match-up against Goblins. The only weird thing, it seems, is the absence of Cabal Therapy. "This isn't the kind of deck where you can go sacrificing all your creatures. You have to win quickly or Bob Maher is just going to kill you."

That Other Giant Format

Pikula's return and Cinderella story makes for a good tale itself, but the relevant format for 99% of PTQ players is currently Extended, not Legacy. Across the room, Shaheen Soorani won the GP Philadelphia PTQ with a deck as different from the archetypes around it as Pikula's deck was different from the Legacy norm.

You may remember that Shaheen won a PTQ with a similar U/W Control deck last year... The former Virginia State Champion says that this deck mashes Dredgatog, Affinity, and Boros Deck Wins, really hurting in only the Heartbeat of Spring/Mind's Desire matchup. If those match-up predictions hold true, then perhaps old school U/W Control is a good choice. Heartbeat of Spring is picking up momentum, nearly in-line with popular choices like Dredgatog and Affinity.

The week's unofficial tally (ironically, PTQ Philly was not yet reported when I wrote this):

For the complete listing of Top 8 deck lists so far, click here.