Released in June 1994, Legends was originally intended to be the first "stand-alone" expansion for Magic. Instead, the set evolved into a 310-card collection of some of the most powerful Magic cards ever printed.

Explore the untold story of one of the most famous Legends in book 1 of the new Legends cycle.

The Legends cycle continues in Jedit. Get a glipse of an alternative future than the one told in Invasion.

Like any other world, Dominia has its Legends. In this new expansion you'll meet Johan, Gabriel Angelfire, Sivitri Scarzam, Hunding, and many more.

As you delve into Dominia's mythology, you'll discover 310 new spells, artifacts, and creatures with the power to defy death.

So enter the world of Legends and join the heroes in the struggle for Dominaria! 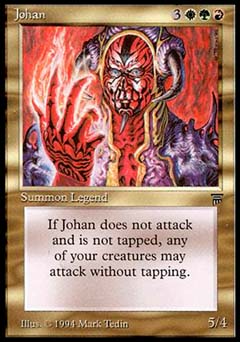