Nelson's art for a green Planar Chaos card shows two woody hands reaching up out of the devastated earth. Here's the art description that Jim saw when sketching and painting the piece:

Color: Green
Location: forest remains
Action: In the midst of a devastated forest, two dead trees have broken and splintered in such a way as to vaguely represent two arms and hands reaching upward. On the forest floor between this landmark, vivid green vines have begun to practically boil out of the hard ground and entwine the bases of these two dead trees. If you want, you can add a green-aligned druid to the scene who seems to be performing some kind of invocation.
Focus: the whole scene
Mood: a glimmer of hope for the forest

The art was originally commissioned for a green lifegain spell, but as sometimes happens during a set's development, the card it was meant for was killed. So the piece was in danger of being stranded without a card to call home. 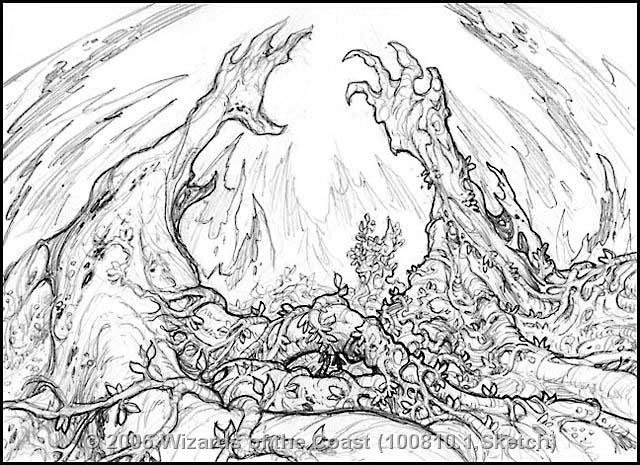 The creative team saw another card in the Planar Chaos set that would be a good match for the art, an uber-animation enchantment that both animated forests and "forestified" saprolings. So they decided to have Jim Nelson continue painting out the piece.

When the final art came in, they assigned the art to the green enchantment, and the card got its name. After some discussion of whether a set should have a card name of the form "____ and ____" in a set that included split cards, it was decided that the name Life and Limb was worth the slight tension, and the card was complete: