Posted in Limited Information on March 9, 2010

t's Adventure Week here at magicthegathering.com, and what's a more adventuresome format than Limited? When you sit down for a Draft, or a Sealed Deck, you don't know what you're going to end up playing with.

But more significantly than the immediate adventure that takes place during any single time you play Limited is your overall experience with a set.

Your experience over the course of a Limited format is an adventure, wherein you are forced to constantly learn and relearn things that you thought you knew in order to become the best you can be. The way in which your adventure through a Limited format takes place is completely unique to you. Your opinions of the format as a whole and the individual cards that will fill your Draft and Sealed decks are dictated primarily by your experiences, things that you've seen/read/heard, and your biases. So while you might think that card A is awesome while card B is bad, your friend might think card A is average while card B is bonkers. And you could both be right! 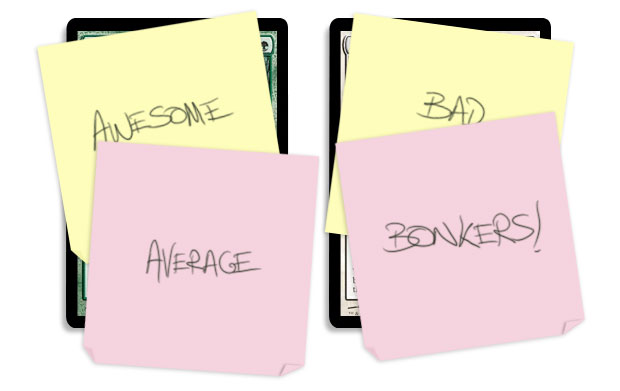 By acknowledging your preferences and thinking about cards in terms of how good they tend to be in the decks that you draft, rather than pretending that you are some sort of drafting robot who constantly makes utility-maximizing picks with no preference between colors or archetypes, you can realize that some of your perceptions of cards are very skewed by your own experiences.

Let's look at some real cards to get a better sense of how our subjective experiences and biases can lead to very different evaluations of cards.

Just Because It's an Artifact ...

... doesn't mean that it's equally good for everyone. Simply being able to cast a card in no way insures that it will be as good in your deck as it will be in your neighbor's deck. In fact, many of the artifacts in Zendikar / Worldwake vary significantly in value depending on what type of a deck you have.

Stepping aside from my unnatural love for Adventuring Gear, which is based mainly on its name, I have legitimate strategic reasons for liking this cheap piece of Equipment. Adventuring Gear is an excellent addition to the aggressive decks that I tend to draft. However, as good as Adventuring Gear usually is for me, it's often pretty weak for a lot of people. This means that I am often able to pick up Adventuring Gears for pennies on the dollar, so to speak.

If I'm drafting a monocolored beatdown deck, I have no problem first-picking a Adventuring Gear. But if I'm playing a multicolored Ally deck, or a slower control deck, it's likely that I won't even want to play any Adventuring Gears even if I could get them for free. So while I have no problem talking up Adventuring Gear, and saying that I think it goes significantly later than it should, that doesn't necessarily mean that you should be taking it any higher than you are, or even that it is necessarily being undervalued by people in general. In fact, if Adventuring Gear doesn't fit into the types of decks that you like to draft, it's likely that you should actually be drafting it lower than you are now.

If, however, the drafting temperature changed, and it was no longer possible for me to get Adventuring Gear and the like at a discount in my aggressive decks, then I would strongly consider moving towards strategies that did not favor Adventuring Gear.

A couple of weeks ago I wrote an article on multikicker wherein I argued that Everflowing Chalice is borderline unplayable in most decks.

A few days after the article went live, I was talking to Brian David-Marshall on the phone and he explained that he actually thinks very highly of Everflowing Chalice. At first I was skeptical. I wanted to ask him, "Are you even playing the same format that I am? Why would you think that Everflowing Chalice is good? Aren't your decks all trying to curve out with cheap efficient creatures and Equipment like mine are?"

A few minutes later, I realized that our differences of opinion on Everflowing Chalice were arising not because we felt differently about proper applications for the card. While my decks are rarely looking to accelerate to four mana on turn three, Brian's decks often are. Brian is looking to cast Bladetusk Boars, Shatterskull Giants, Mold Shamblers, and even Sky Ruin Drakes (which, by the way, is significantly better when it can be cast before turn five). Additionally, Brian often kicks his Everflowing Chalices twice to help power out Vastwood Gorgers or the kicker ability on his Mold Shamblers. 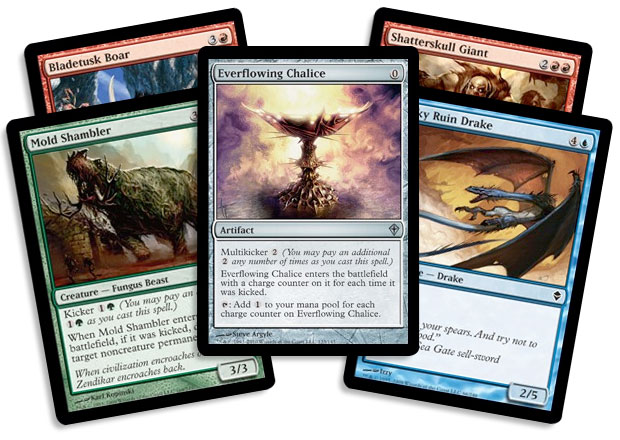 When you are building your game plan around these types of cards, then it's pretty clear that Everflowing Chalice is actually quite good for you. But when your deck's curve pretty much tops out at four and you are mostly trying to overpower your opponents with quick, aggressive creatures and equipment, Everflowing Chalice is quite weak.

Since I rarely draft decks where Everflowing Chalice would be good in, I have developed an especially critical opinion of it.

So while I don't intend on changing the way that I draft Everflowing Chalice at all in the immediate future, I have changed my opinion of it in the abstract, and I now have a better understanding of why people would look to draft it. The other directly related (and in many ways more significant) lesson that came out of my conversation about Everflowing Chalice as a better understanding of potential strategies that I could look to exploit should people begin to draft the set differently.

It's pretty easy to see how this would affect your play, even if you just look at pretty basic creatures. If I have a ton of evasion creatures in my deck, or a really good late game, and I'm mostly concerned with preserving my life total long enough for my best cards to come online, I will have no problem trading a Surrakar Marauder or a Kor Aeronaut for a vanilla 2/2 on turn three if that's what the situation calls for. But if my deck is lacking in evasion, or I am actively looking to race, then it is quite unlikely that I will be willing to trade one of my 2-power evasion creatures for my opponent's vanilla 2/2 on an early turn.

Once you start looking at more complex cards, like Adventuring Gear or Everflowing Chalice, you will see that your strategy preferences can have a huge impact on the way that you draft, not only in any single draft but over the course of the whole format.

So if, over the course of the format, you tend to draft decks with flat curves, rather than decks with a ton of two- or three-drops, then it is unlikely that you will have any reason to think that Adventuring Gear is a particularly good card. Similarly if, over the course of a format, you tend to draft decks with tons of two- or three-drops, and rapidly declining numbers of more expensive cards, then it will be quite difficult for you to think that Everflowing Chalice is even worth playing except for in the most bizarre corner-case scenarios.

While Brian has had plenty of success with his Zendikar / Zendikar / Worldwake draft strategies, I don't have an immediate interest in changing the way that I draft the format. Sure, I'm definitely going to try some slightly different strategies (now that I know they're viable), but while these new insights will definitely have a large effect on how I think about the format, they are unlikely to make a huge difference on the way that I play the format. Simply put, I think that being very aggressive is the best strategy in Zendikar / Zendikar / Worldwake ... at least for now.

What this conversation has done is inspire me to think about a format with more of an open mind. Even though I am pretty confident that I want to be aggressive in every draft, that doesn't necessarily mean that it will be optimal to pursue an aggressive strategy every time. If your first few picks (or your first pack) suggest that pursuing a different strategy would give you a better chance of winning, then you should be willing to pursue that other strategy. And in order to do that effectively, you should do your best to learn how to pursue different strategies effectively.

During your early experiences with a set, it will make a lot of sense to try to learn how to draft a small number of archetypes that you have a particular affinity for. As a format goes on and you become more comfortable with your knowledge, you should look to learn about how to best draft as many different strategies as possible.

You are playing in a Zendikar / Worldwake Sealed premier event on Magic Online, and you have constructed the following deck:

You sit down for your first game of round one and you draw an opening hand of: 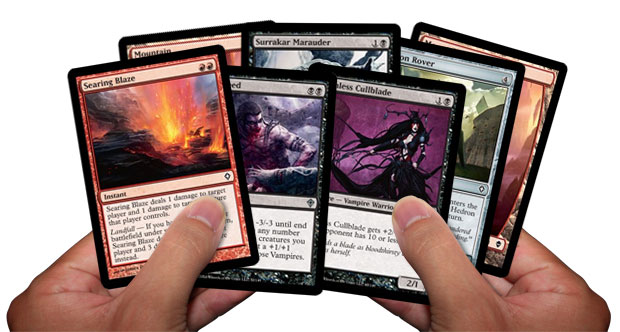 Do you keep on the draw? How about on the play?

Head on over to the forums to discuss your answer!

Posted in Limited Information on March 9, 2010