Analogs in Born of the Gods

Posted in Limited Information on February 19, 2014

ow that we have Born of the Gods fully released, the real fun begins. For us Limited specialists, it means drafting. And more drafting. Just keep me drafting, and I'll be happy. The first order of business when a new set comes out is to figure out how the new set affects the existing environment.

Sometimes, we get a brand-new block or standalone set, in which case we are starting from scratch. Other times—Born of the Gods included—we get a set that is simply being injected into an already-existing block. The changes are often subtle. In fact, it often takes a scientific eye to come to the scientific conclusion that things haven't changed much. 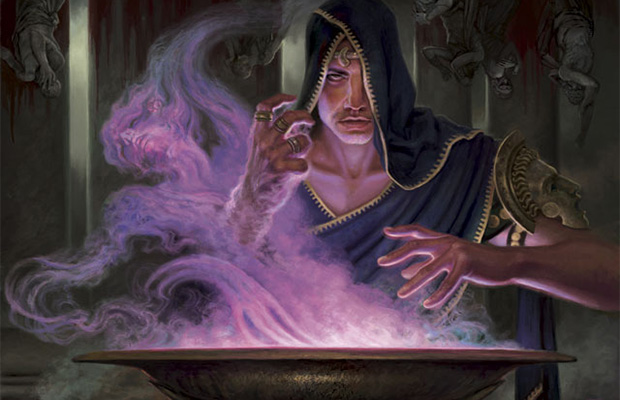 When we first get our hands on the new format, the expectation is change. New cards, new format, right?

Just as important as finding the differences in the fresh format are finding the similarities. It's possible that a brand-new set changes almost nothing about the way a block plays out. As with most things, however, the truth usually lies somewhere in the middle.

Let's take a look at how one of the better archetypes may have changed—or not—with the advent of Born of the Gods.

It's important to think in terms of analogs when comparing existing cards to their newer replacements. It's equally important to note when there simply isn't a replacement for a key card in a given archetype.

I remember when my friend and mentor Ryan Spain was teaching me how to approach Limited, he taught me about recognizing analogs, and what a great tool it is to help understand the impact of a new small set into an already-existing format.

I'm going to show some examples to help demonstrate what I mean.

One of my favorite decks from Theros was White-Blue Heroic. A well-built example of the deck makes a good case for being the best deck in the format. Now that we have a full Born of the Gods pack thrown into the mix, what has changed and what hasn't?

Before you get all protective of your precious Wingsteed Rider, remember that it's an arrow pointing to it, not an equals sign. The point of small set analogs isn't to find cards that are the same power level. Instead, the point is to find cards that have reasonable facsimiles in the new set. Akroan Skyguard effectively replaces the same pick that Wingsteed Rider would take, and slots rather effortlessly into the archetype.

As you can see, sometimes we even get significant upgrades to our previous slot-holders. Chorus of the Tides is way better in the White-Blue Heroic deck than Coastline Chimera. Even though the Chimera is specifically made for the white and blue color pair, we're pretty thrilled to see a Snapping Drake with upside show up in Born of the Gods.

More upgrades! Setessan Battle Priest was always kind of a letdown. The lowly 1 power is disappointing, and it's nice to see that we get a power boost with Oreskos Sun Guide. Again, it's not that these cards are meant to be identical in any way, it's just they are the white common two-drop, and one is quite a bit better than the other.

Here we have our two blue common draw spells. Yet again, we see a significant upgrade coming from Born of the Gods. Divination is good enough to consider playing in the White-Blue Heroic deck as a way to recharge the battery later in the game. Thassa's Bounty was never even a real consideration for the deck.

This one is a bit murkier. While both are common heroic enablers that draw a card for two mana, they offer different payoffs. We'll see how evasion with conditional blocking compares to 2 extra toughness, but the main effect on both of these cards is still intact: target my creature and draw a card.

Now things are getting pretty tricky. Voyage's End was one of the best blue commons in Theros. An instant-speed, two-mana way to interact with the opponent's creature was a rare and useful commodity in Theros. Retraction Helix offers a similar end outcome, but gets there a much different way. The downside is that you need to have an untapped, non–summoning sick creature that you didn't want to attack with anyway and that doesn't get killed in response to the Helix. The upside is that it costs a mana less and you can potentially get a heroic trigger from one of your creatures. It's not entirely clear which is stronger, but I'm guessing Voyage's End will still be a better card, even if Retraction Helix sees plenty of play.

I hope that these examples helped show you some of the analogs coming our way for one of the better decks in triple-Theros. Perhaps an even bigger question is what is missing in the new pack? Which important cards for the archetype just aren't present anymore? 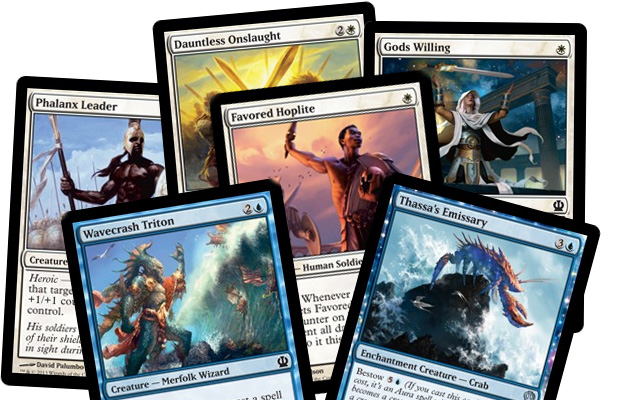 
These are but a few of the powerful cards that make the deck tick. We don't have reasonable analogs to these cards, and some will be missed. Not all is lost, however. We get a slew of exciting new cards to help this deck out as well. 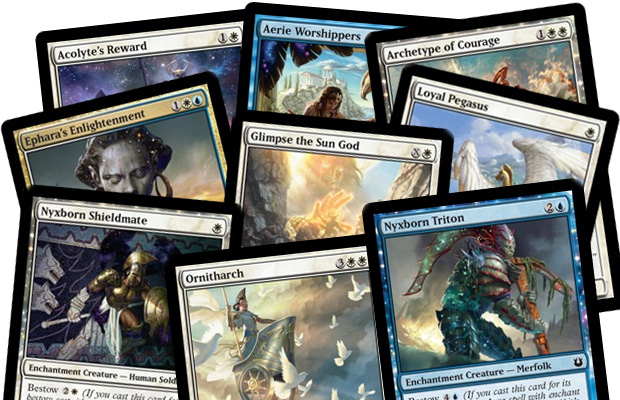 
As you can see, there are plenty of awesome cards incoming, too.

Prepping for the Pro Tour

As we mosey our way through the new format, Limited superstars of the Pro Tour are madly trying to get to the bottom of this mystery as quickly as possible. That's right, Pro Tour Born of the Gods is this weekend.

Starting on Friday, the coverage team will be bringing you every round of action from Valencia, Spain! What an exciting event, and for readers of this column it's especially exciting because we get to see how the pros attack this new format. We will be following a selected professional player during the draft portion and then watching the drafted deck in action on the stream. It's usually the highlight of my weekend, being in the booth commentating a draft with my friend Zac Hill.

I don't see this format as being super shaken up by Born of the Gods. I think the analogs are generally there, and that the established decks will continue roughly on the same path.

I think that black-based decks will continue to be the best in the format; I liked black-green the best in Theros, with blue-black right behind it. I also think we may see blue-black overtake black-green as the strongest deck. As mentioned above, White-Blue Heroic loses a few important cards in the first pack, but is rewarded by very powerful cards as well. (Ornitharch, anyone?) 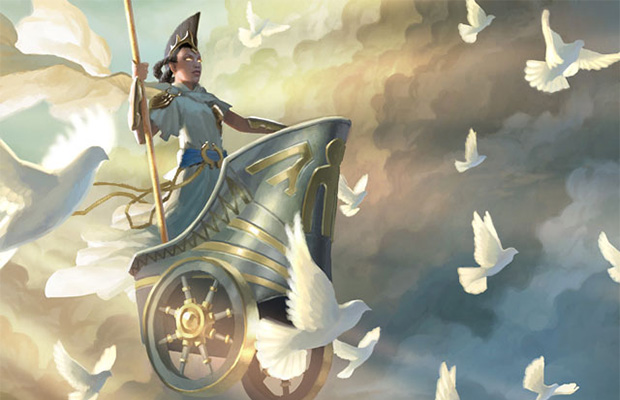 Green-blue was also a deck I liked a lot in Theros and I think it gets some nice new tools in the new format. The green cards are a bit worse on average, but not enough to kill the deck. The blue cards are often upgrades, and I still think that with two Theros packs, the deck is viable.

White is a little more well-rounded in Born of the Gods than it was in Theros, although it still suffers from a high top end complimented by an atrocious low end. If you are one of two drafters drafting white at the table, I like your chances. If you are the third or fourth wheel on this particular bus, I like them a lot less.

Red was my least favorite color to draft in Theros, but it has received some significant upgrades in Born of the Gods, and I think it's a color to look out for. We only get one pack of it per draft, but as a support color that may be all we need.

I usually prepare for commentating the Pro Tour by drafting as many times as I can. I don't see any reason to change that at this point, and I look forward to forming opinions and then reforming them over the course of the weekend.

Posted in Limited Information on February 19, 2014