Posted in Limited Information on September 29, 2009

'm very excited about Zendikar Limited. While there are certain mechanically driven themes that are worth pursuing, it seems like pretty much every color combination has something cool going for it.

Blue-green is best suited to take advantage of landfall, red-white appears to have the tools for the best single-mindedly aggressive strategy, green-white looks like a great color combination to reliably take advantage of Allies, a black-green mana ramp deck that can reliably kick up Heartstabber Mosquitos and support a bunch of cool splash cards is probably going to end up being quite popular, a blue-black deck filled with evasion and removal looks like the kind of deck that I'd really like to draft, there's another blue-green deck that looks to clog up the ground with big green guys and go to the air with its blue ones ....

I could go on like this for an entire article, just talking about potential ideas for draft decks in an incredibly ADHD way, but I should probably reign myself in a bit and just spend my time thinking about new draft archetypes while I'm eating, commuting, reading, watching TV and doing all sorts of other things when I probably shouldn't be thinking about Magic. 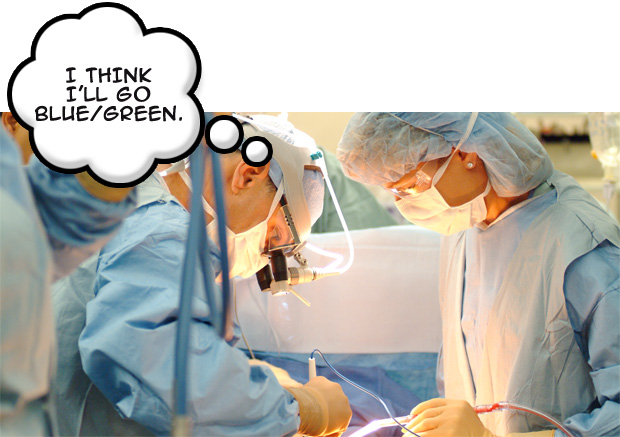 While I do enjoy multicolored formats such as Shards block Limited where each deck has access to a huge range of cards, I get a particular kick out of being able to create my own archetypes that are uniquely different from the types of decks that anyone else is looking to draft.

In order to have a good sense of what types of decks are going to be good to draft, we need to have an intimate understanding of what the set has to offer. In order to start really exploiting the options that are available to us, let's take a closer look at the mechanics of Zendikar.

The Opposite of a Drawback

In any other format a card like Living Tsunami would have a slightly frustrating drawback, preventing you from getting any more lands onto the battlefield naturally than you have when you cast it. A reasonable drawback no doubt for a four-mana 4/4 flier, but still one that could prove frustrating if, say, it were the only four-drop in your hand, and you also had a five-drop that you wanted to cast. 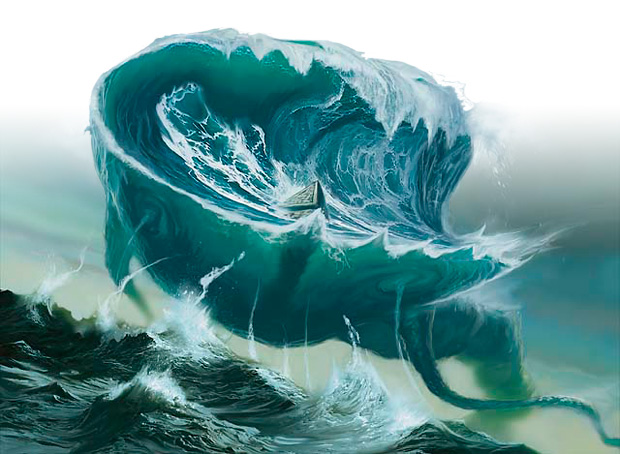 Sure, you could still use mana ramping spells to get extra mana into play after your Living Tsunami hit the board. But the bigger thing preventing Living Tsunami's drawback from really hurting you (even if your deck does have some very expensive spells in it) is that most of the time when you have an unanswered 4/4 flier on the board in Limited for a prolonged period of time you're probably going to win the game.

But in Zendikar Limited, Living Tsunami's "drawback" of forcing you to return a land to your hand every upkeep is actually one of the card's best features, as it gives you a land every turn to trigger your landfall abilities with.

Similarly, Khalni Gem would be a good card in pretty much any format as it's a colorless way to fix your mana and ramp you up considerably. Sure, it might not be as good as, say, Explosive Vegetation most of the time, but it's still pretty special, especially if you aren't playing green as a main color.

In Zendikar Limited, Khalni Gem is particularly special, as it gives you the opportunity to trigger landfall two more times and get an additional trigger out of your lands with "enters the battlefield" abilities such as Akoum Refuge or Soaring Seacliff.

Kor Skyfisher is another card that turns out to be better than it might initially look. In previous formats, Kor Skyfisher would be a pretty good card. You might have been able to put it to good use returning a creature with an "enters the battlefield" ability, it might have freed one of your creatures from a Pacifism, or it might have just been another reasonable evasion creature that you generally wouldn't play until turn four or five at the earliest.

In Zendikar, Kor Skyfisher really shines, because there is an abundance of ways to put its return a permanent you control to its owners hand "drawback" to good use. It might pick up one of your Allies, giving you another opportunity to give your other Allies an enhancement. It might pick up a land to let you trigger landfall again. It might pick up a Kor Cartographer, a Kor Hookmaster or a Gatekeeper of Malakir so you can get another use out of your best "enters the battlefield" ability.

Now keep in mind that just because a lot of decks will get additional utility out of cards like Khalni Gem that will enable you to get additional landfall triggers, that doesn't mean that it's automatically going to be great for your deck. For example, you might have drafted an aggressive red-white deck with a low curve, a bunch of Allies, and only a Plated Geopede or two that triggers off of landfall. In that case, the otherwise quite powerful and extremely versatile Khalni Gem is probably best off sitting in your sideboard.

Making the Most of Landfall

Steppe Lynx is a card that should elicit a lot of different responses from you. From "Wow, that's going to be awesome in Constructed with fetch lands!" to "I'd really like to have some of these if my deck has a heavy landfall theme," to "I might play one or two if my deck is hyper-aggressive," to "this card is going to be terribly ineffective in a lot of decks." 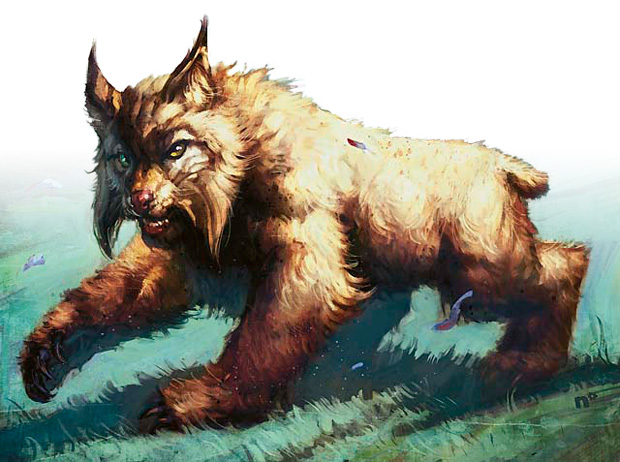 I don't need to explain why a card like Rampaging Baloths or Ob Nixilis, the Fallen is going to be extremely good even if it's the only landfall card in your deck. Or why less ridiculous—but still powerful—landfall cards such as Windrider Eel, Geyser Glider, or Territorial Baloth are very good even if you aren't going out of your way to take advantage of them. But cards like Khalni Heart Expedition or Hedron Crab are quite weak if your deck is not constructed to take advantage of them. 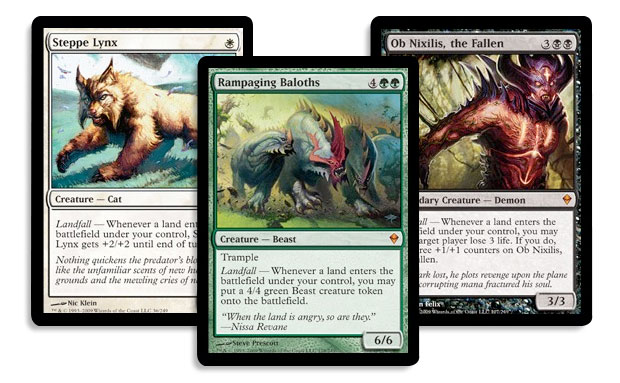 Landfall reminds me a lot of Mirrodin's affinity mechanic in this sense: great when you your whole deck is functioning with that goal in mind, good when your deck is somewhat concerned with utilizing the mechanic, and pretty weak when you only have one or two cards that seek to take advantage of the mechanic.

Myr Enforcer was a card that was awesome in Constructed, great in Limited decks with a ton of artifacts, good in Limited decks with a decent amount of artifacts (where it would usually cost you about five to cast, but sometimes you would get it a bit cheaper), and pretty weak in decks that had no way to support it, where it would pretty much always be a seven-mana 4/4.

So if you are able to focus your entire deck around landfall, your Windrider Eels are going to be even better than they would be normally, and your Plated Geopedes will go from being good to being something pretty special.

Early in the draft you might decide to work really hard for your deck to focus around landfall, or you might just notice early in pack two that you've picked up some good landfall cards and you are now properly incentivized to pick up cards to support them. Either way, landfall is only going to be as good for you as you let it be.

You should vigilantly keep an eye on how much landfall you have in your deck. It can and will have a huge impact on the way your draft.

Magic 2010 Limited offers you the opportunity to occasionally pursue tribal strategies, but with the exception of a couple of white Soldiers like Rhox Pikemaster or Veteran Armorsmith, you would have to have a rare such as Vampire Nocturnus for your creature types to mean anything.

While creature types would sometimes mean something, the times where they really mattered were few and far between. But that all changes in Zendikar, where we are given plentiful opportunities to take advantage of creature type synergy.

The way that synergistic card types like affinity, landfall, or Allies work is that they get better the more of them that you have in your deck. So while your first Umara Raptor might only be a Wind Drake, and your first Oran-Rief Survivalist might only be a Runeclaw Bear, and while those are reasonable cards for Limited, if your deck consisted of nothing but Oran-Rief Survivalists and Forests you can see why that would be pretty absurd.

While the extreme situation of having 20-23 Ally cards for your deck is only going to happen once in a mono-blue moon, there are going to be plenty of opportunities for you to draft a deck with six to ten Allies, and that's going to be pretty good.

I need to draft the format more before I'll feel comfortable giving specific advice about how you should value Allies as your draft moves on, but if you finish up pack one and you don't have any Allies, you probably aren't going to have any reason to start drafting Allies.

If you have a couple of Allies after pack one, you might be able to start grabbing enough Allies to make it a strong theme or subtheme in your deck. If you push it hard from the start, taking Allies over cards that are quite good on their own, you will stand a good chance of drafting a deck where your allies really shine.

You've just woken up bright and early to play in a Zendikar Launch Party at your local store. You just finished your bagel, and now it's time to build a deck from this Sealed pool:


How do you build this deck?

Post your build in the forums and check out the builds that other players came up with!

Posted in Limited Information on September 29, 2009