Posted in Limited Information on July 6, 2010

he Magic 2011 Prerelease is this weekend, and I'm looking forward to it.

I enjoy core set play a lot. No, I wouldn't want to draft core sets every day for the rest of my life—I like the newness and the excitement that each new block offers. Just the contrast between the lightning fast Zendikar Limited format and the slower, more archetype driven Rise of the Eldrazi Limited is enough for me to explain why I'm always excited to draft a new block with new mechanics.

Every new block forces us to dramatically rethink the way we play, and every new block gives you a chance to get a huge leg up on your competition. You might be one of the best players at your store or even in the world at Rise of the Eldrazi Limited, but when the next block comes out, you're going to have to be ready to learn a lot of new things.

While each new block reinvents the way we play Limited, core set play encourages us to focus on the fundamentals. The less mechanically driven cards in a core set allow us to play a much cleaner game that I find very refreshing.

Core set play isn't about getting a bunch of level up creatures and Venerated Teachers, or finding ways to power out huge Eldrazi monsters, or beating your opponent on the fourth turn thanks to your double striker and a bunch of pump spells. It's about locking up the ground and winning in the air, or about besting your opponent with attrition like Gravediggers, Equipment, and that well timed two-for-one, or about holding on to your Doom Blade in case your opponent plays a Dragon that you absolutely have to deal with. 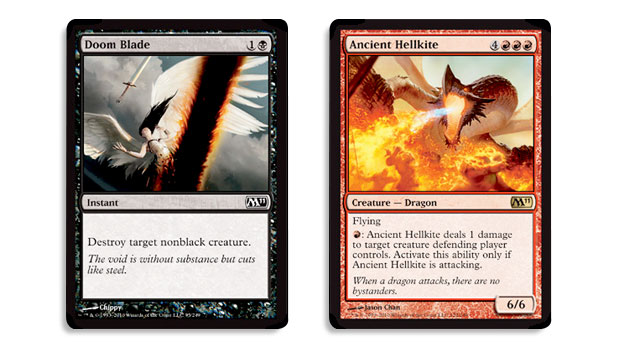 You generally can't do things that are outrageously powerful in core set play, but must instead figure out ways to live long enough to fly over for victory, or how to attack through a cluttered board to get your opponent in Lava Axe range, or how to lure enough removal out so that a Prized Unicorn can lead a charge to victory.

Drafting the core set for a couple of months a year helps to remind me that the cards don't have to be all new and shiny and unique for us to have endless hours of fun with interesting and complex games.

I have two new preview cards for you today, and I'll admit right now that they aren't the flashiest things you'll see out of the set. But not every card is a bomb, or even something you would be willing to spend one of your first picks on. And if you're looking to understand a Limited format, you have to look past the fearsome Dragons, the top removal spells, and the undercosted evasion creatures to really know what's going on.

Just because a card isn't flashy doesn't mean it can't have a big impact on your next tournament. In fact, the first card that we're going to be looking at today has the ability to win a lot of games.

Think you're well equipped enough to take a look at our first preview card of the day?

In fast formats you don't want to spend four mana to attach a piece of Equipment that only gives a +3/+1 boost—but M11 doesn't look like it's going to be a particularly fast format.

You still aren't going to want to cast a Warlord's Axe on turn three and then equip it on turn four if you have any other options. But late in the game, when your Elite Vanguards, Silvercoat Lions, Sylvan Rangers, Gravediggers and Æther Adepts aren't doing much other than clog up the board a bit, a reusable +3/+1 boost can be huge. 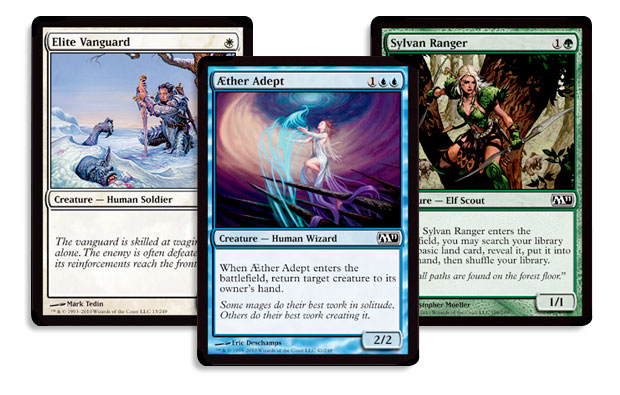 Just think about what would happen if you put a Warlord's Axe on one of the high-toughness creatures from the Visual Spoiler, like a Greater Basilisk or an Azure Drake. Your reasonable but not particularly fierce creature would suddenly become the most menacing card on the board, possibly towering over anything in your opponent's deck!

Yes there will be the occasional Lightning Bolt or Doom Blade that will make you feel kind of silly and set you way back after you've invested a bunch of mana into your creature and the equip cost of your Warlord's Axe. But if your opponent doesn't have that cheap removal spell handy, your Elite Vanguard will be able to trade with a Greater Basilisk, or pretty much any other creature that costs five or less. 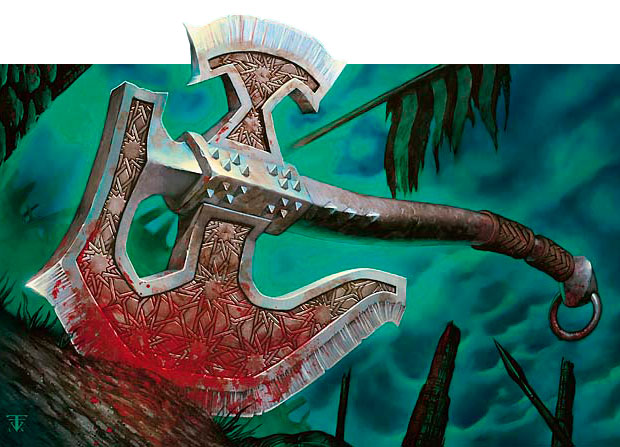 Warlord's Axe isn't right for every deck, not by a long shot. If you already have a lot going on at the top of your curve, then you might not want to spend a slot on the admittedly slow Warlord's Axe.

While not everyone should try to wield the Warlord's Axe, if you have a very aggressive deck with a low curve, a deck that has a lot of toughness but not enough power, and/or some cards such as Prized Unicorn or Overwhelming Stampede that greatly incentivize you to have some power enhancements handy, then Warlord's Axe can be a great option.

You probably wouldn't want to first pick it, even if it was just right for your deck, but if you're looking for a little bit more oomph to help you punch through late in the game, then look no further than Warlord's Axe.

With solid Equipment like Warlord's Axe running around, you want to have access to some good answers. If you don't have an answer, then you might gradually get clobbered by 5/3 Gravediggers, 6/6 Greater Basilisks, and 5/5 flying Azure Drakes.

Want to see a good way to deal with opposing artifacts?

Red has had access to good ways to deal with artifacts for years. But other than the fairly pricy Ingot Chewer, it's been quite a while since red has been able to destroy an artifact and get a decent creature all for an affordable price. Consider:

If your opponent spends seven mana to equip a Warlord's Axe and make a strong attacker, but you are ready with a Manic Vandal, your opponent is going to be hurting pretty bad. 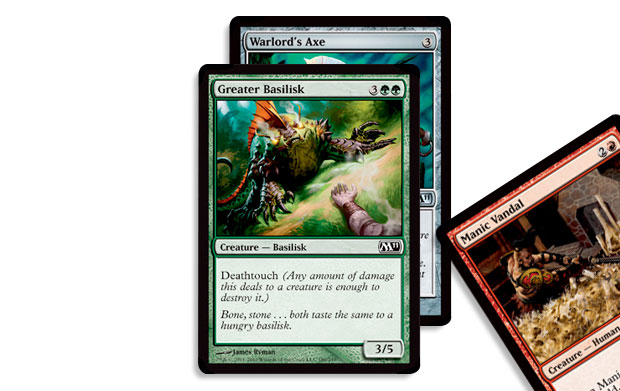 Juggernaut can be a pretty scary card, at least until you destroy it and get a 2/2 body for only three mana. 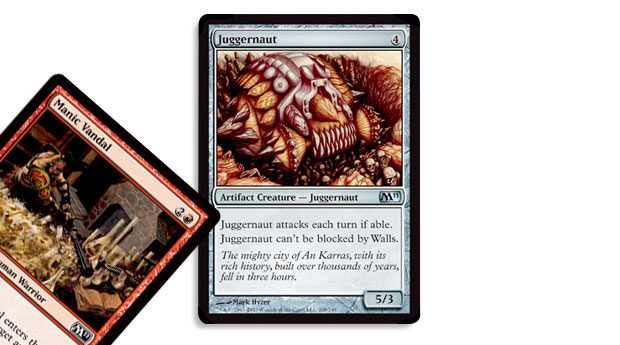 Over the course of just a couple of turns, Crystal Ball can help its controller take over the game by giving him or her incredible card selection capabilities. If you have a Crystal Ball you might never need to draw a land again! That is, at least until the Crystal Ball gets shattered by a Manic Vandal. 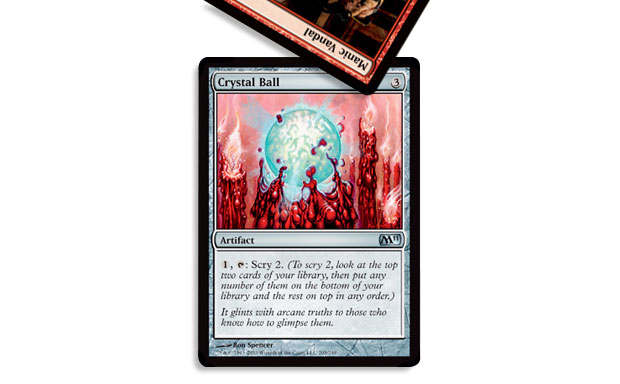 Manic Vandal is a card that has a lot of upside. If you are able to destroy one of your opponent's high-quality artifacts and get a creature to boot, you will have plenty to smile about. 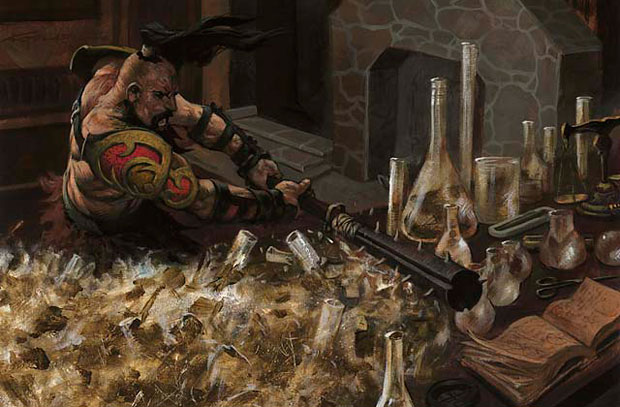 Unlike most artifact removal spells, you don't have to worry about it clogging up your hand. Even if your opponent doesn't have any artifacts to destroy, there are worse things in the world than paying three mana for a 2/2 creature. This allows you to include Manic Vandal in your main deck, even if you don't expect to see too many artifacts. But if you are going to cast a Manic Vandal without any artifacts on your opponent's side of the board, you should keep in mind that Manic Vandal's ability is mandatory. So if you are the only player who controls any artifacts, you must target one of them.

Like Warlord's Axe, Manic Vandal isn't the type of card that you want to take early. But if you are looking for a card to fill out your deck that could have a very big impact on the game, then Manic Vandal could be just the Human Warrior for the job.

Have Fun at the Prerelease!

I hope that you get the chance to make it out to a Prerelease this weekend! It's going to be a blast.

This weekend I'll be in West Chester, PA taking on all challengers at the Gray Matter Conventions Prerelease. If you happen to be in Pennsylvania, then you should drop by, say hi, and play me in a game of Sealed Deck!

Oh, and if you do end up playing a Warlord's Axe, be sure to axe your opponent some tough questions.

Posted in Limited Information on July 6, 2010