Back to the Future

t's Sequel Week here at Daily MTG and Pro Tour–Amsterdam just so happens to feature some very cool sequels. The last Pro Tour in Amsterdam featured a historic Top 8 and marked the beginning of career-changing tears through Mirrodin Limited for Nicolai Herzog, Anton Jonsson and Mike Turian. And this Pro Tour in Amsterdam will give the pros a chance to show off the Magic 2011 skills that they have built up over the last couple of months. 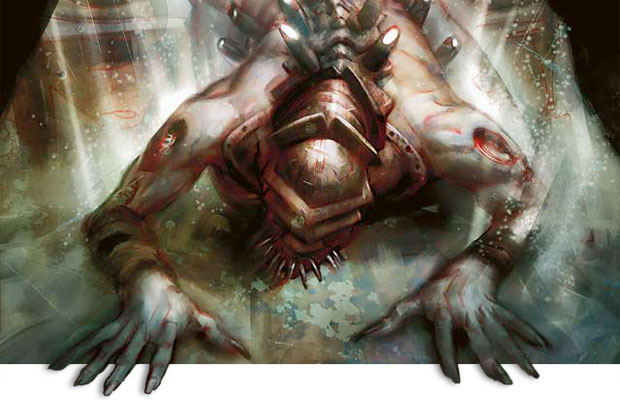 My very first Pro Tour was Pro Tour–Amsterdam back in 2004 and the format was Mirrodin-Mirrodin-Mirrodin Rochester Draft. I had worked very hard to qualify, I drafted the format countless times a week and I went to every Pro Tour Qualifier that was within a six-hour drive. In my first PTQ of the format I made it to the Semifinals before losing to a top-decked Awe Strike.

I vowed to do better next time.

I made good on this promise to myself and in my next Amsterdam PTQ, I breezed through to the finals before losing to yet another top-decked Awe Strike (my nemesis!).

My confidence was severely shaken. I had gotten so close two times in a row and I hadn't been able to capitalize.

I 0-2 dropped the next PTQ that I went to and spent the remainder of the day sulking, losing side drafts, and eating enough Pizza Hut to make me queasy.

I had a two week gap between that PTQ and the next one that I could reasonably attend and I decided not to play any Mirrodin Limited during that time—I wanted to give myself a little bit of a breather. I still played a bunch of Constructed on Magic Online, and I still went to my local shop a lot, but, as painful as it was for me, I didn't join a single Draft.

The two weeks until the next PTQ went by as slowly as any two weeks ever had for me, and when Saturday morning finally rolled around I felt confident. Really confident.

It was still a few years before Facebook or Twitter hit the scene, so I didn't have a very effective soapbox for my confidence/cockiness, but I was able to make my AIM away message "Off to win a trip to Amsterdam". I went on to win the PTQ but unfortunately nobody sent me any instant messages that day so my brashness (fortunately? unfortunately?) went unnoticed.

My cockiness stayed with me until the first draft pod of the Pro Tour where I got off to a 2-0 start. I was pumped. I was ready to take down the tournament. Nothing could get in my way.

And then I lost my first match. I was crushed. My tournament was over. There was no coming back.

A dismal 0-3 in my next pod later and my first Pro Tour had ended in a ball of flames.

I was very disheartened by my poor finish. I had spent so much time trying to qualify, and so much time preparing and it still didn't matter. What was the point?

I decided that I wasn't going to try very hard to qualify any more—especially not for Limited ...

Taking it Up a Notch

Nicolai Herzog won Pro Tour–Amsterdam and then followed it up with another win at the Mirrodin-Mirrodin-Darksteel Booster Draft Pro Tour in San Diego later that season. Mike Turian and Anton Jonsson joined him in both of these Top 8s.

Making a Pro Tour Top 8 is a huge accomplishment, one that a vast majority of Magic players—even Magic players who spend many years competing on the Pro Tour—will never achieve. A Top 8 at back-to-back Pro Tours in the same format—well that takes a whole lot more than luck.

The fact that Herzog, Jonsson and Turian were able to post repeat Top 8 finishes at these two events showed me that with the right attitude, and a lot of hard work, a person could be absolutely dominant at a Limited format.

It was the Pro Tour–San Diego, the sequel to Pro Tour–Amsterdam that made me realize just how great Limited is. I knew that if I worked hard and spent a lot of time thinking about Limited that I could become really good at it—not just good enough to win a single Pro Tour Qulaifier, but good enough to consistently place well at the Limited tournaments that I played in.

It took me a while, and I never became as good as absolute masters of the game such as Turian, Herzog or Jonsson, but I became a pretty good player in my own right, putting together a string of Top 16 and Top 32 finishes at Limited Pro Tours and Grand Prix.

How is this encouraging you might ask? It was, and is, encouraging because it made me realize that there was still a lot of room for my game to grow. That even after ten years of play and over six years of part or full time play on the Pro Tour that I could still get better.

Given how great an impact Pro Tour–San Deigo 2004 had on my Magic playing career, it was very exciting for me when Herzog and Jonsson continued to demonstrate their expertise in Limited when they both waltzed their way to the Top 8 at Grand Prix–Gothenburg last weekend.

I'm sad that I won't be able to make it to Pro Tour–Amsterdam this time around, but I will be eagerly reading the coverage right here at DailyMTG all weekend long!

What to Watch For?

The upcoming Pro Tour–Amsterdam is going to feature a brand new Constructed format and a Limited format that players have had a good amount of experience with.

I am very excited to see how the new Extended format shapes up. Will players rack up the wins with old reliable strategies that we've seen in past Standard formats such as Faeries, Mono-Red, Jund or White-Blue Control, or will we see some entirely new strategies dominate the tournament?

There have been a lot of major tournaments using Magic 2011 Limited at this point, but none of them have been as big as a Pro Tour. For players playing in Amsterdam, every M11 Limited tournament that they've played in up until now has simply been preparation for the Pro Tour.

The players at Amsterdam who have played in a National Championship, a Grand Prix, a Pro Tour Qualifier, a Magic Online Daily Event, or even just a bunch of eight-player Drafts have been honing their skills and will no doubt be bringing their "A-game" to the Pro Tour this weekend.

Early on in a format, you can use the Draft Viewer to identify mistakes that even the best players in the world made simply due to their, as well as everyone else's, inexperience with the format. But by the time that a Limited format has been out for a couple of months, and there have been a number of high profile events in the format, you will find that there are a lot fewer picks to criticize and a lot more picks to disagree with. 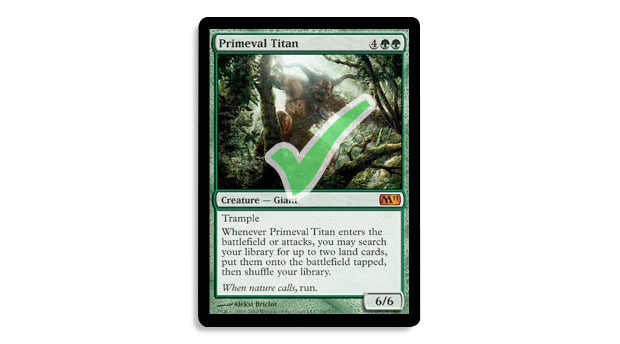 Early on in a format there are a lot of things that the Magic playing community at large simply doesn't understand. Over time, however, players learn more and more about the format. The sleeper cards get discovered, the overrated cards get taken a little bit later, and the powerful, but hard to find, oddball strategies gradually make their way into players' rotations.

The Pro Tour–Amsterdam Draft Viewer will feature picks made by players who have developed very strong preferences over the last couple of months of M11 Limited. Because of that, you might see some pretty wild, easy to disagree with picks that are being made for all the right reasons.

For example, I really don't like drafting red in M11 Limited. Sure I'll take a Fireball if I see it, but you would have to really twist my arm before I would even consider taking the double red Chandra's Outrage. If my first pick offered me a choice between a decent card in blue, white, black or green—such as a Gravedigger, a Wild Griffin, a Sylvan Ranger, or even something as unremarkable as a Preordain—versus a Chandra's Outrage, I would go with the non-red option. 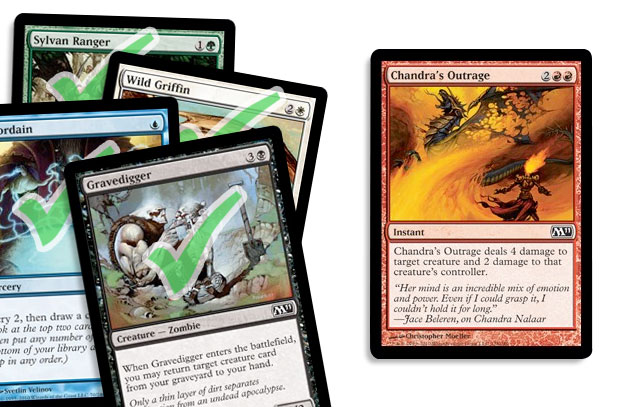 Of course, it would be very easy for a player to speak critically of someone who took a decent creature like a Wild Griffin over an excellent removal spell like Chandra's Outrage. I mean, if it were done for the wrong reasons it would be a pretty terrible pick. But if a player has an extremely strong anti-red bias, and would probably abandon a first picked Chandra's Outrage if anything else even remotely attractive came along, then there are few better things that player can do to get his or her draft started off than passing a very good double red card to the player on his or her left.

While my biggest Magic 2011 bias right now is strongly anti-red, we will no doubt see some players in the Draft Viewer who are looking to force a specific color or color combination. At Pro Tour–San Diego in 2004 Kai Budde did an analysis of the Top 8 draft and in it he explained that Mike Turian, who dominated every Mirrodin Block Limited tournament he played in, would go out of his way to draft red-white. A fact that other players at the table no doubt knew and responded to.

Will we see something similar in Amsterdam this weekend?

Another really fun thing that we will get to do with the Pro Tour–Amsterdam Draft Viewer is that we will be able to track how early players will be willing to take Squadron Hawks under a high stakes situation. It's a lot easier to go out on a lark and take a Squadron Hawk with your second pick if you are playing in a casual Draft with your friends than it is to do when there are thousands of dollars on the line.

Scars of Mirrodin is right around the corner, but there are still a lot of great opportunities to play M11 Limited in the coming weeks and months, and I look forward to using the information that I glean from this weekend's Draft Viewers for my upcoming M11 tournaments.