t's round thirteen of Grand Prix–Nashville. I'm currently 10-2 and playing to 3-0 my pod against Todd Anderson. This is a very important match for both of us. Three more wins and I'll be able to draw my way into the Top 8, three wins and a loss and I'll still Top 16 and get a much needed invitation to Pro Tour–Paris.

I'm playing a green-red dinosaur deck full of mana Myr, Molder Beasts, and Alpha Tyrranaxes (roooooooooooar!) and Todd is playing a mid range white-red deck. I took Game 1 on the back of my many dinosaurs, and I was a ways into Game 2 when I found myself in the following, seemingly simple game state.

My board consists of a Blade-Tribe Berserkers, an Embersmith, an Iron Myr, three Mountains and three Forests. I have Untamed Might and a Vulshok Replica in my hand. Todd has a Gold Myr, an Iron Myr, two Plains and two Mountains—all untapped. 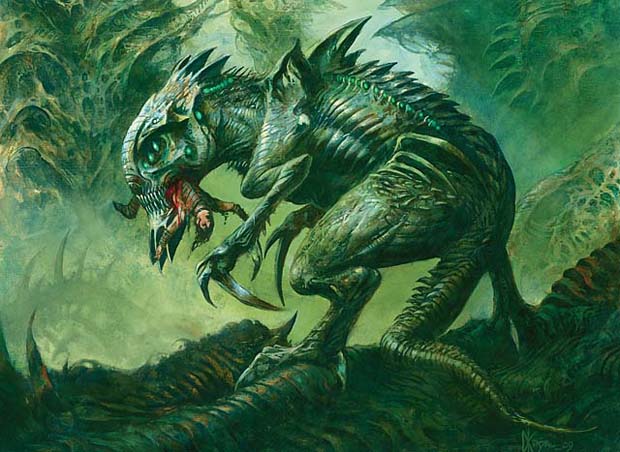 At this point I know that I'm going to play my Vulshok Replica and activate Embersmith to kill a Myr this turn—I think for a little while and I decide that I'm going to kill it after combat and promptly attack with my Blade-Tribe Berserkers.

Why did I wait to kill one of Todd's mana Myr? After all, I knew I was going to kill it before the turn was over, and I knew there was only a very slim chance that Todd was going to block with a Myr. If he actually did block with one or both of his Myr that would only be good for me as I would end up gaining a huge advantage thanks to my Untamed Might, even if he had a Giant Growth effect.

You see, I've been conditioned over the years to wait as long as possible to make most of my plays—and to give my opponents opportunities to play combat tricks if I have a trump at the ready.

In a different format, filled with different tricks, my play would have been 100% correct.

If I were playing a different format, though, there would be a good chance that my opponent had a Giant Growth or a Brute force in his or her hand, then I might have been able to destroy him or her with my Untamed Might.

But I wasn't playing some other format, I was playing Scars of Mirrodin Limited.

So when I attacked in with my Blade-Tribe Berserkers Todd ambushed it with a Darksteel Sentinel.

You see I gave Todd the mana, and the opening, to mug my biggest creature with his instant speed indestructible 3/3. If I had played that turn correctly my Blade-Tribe Berserkers might still be alive today!

Well, probably not, but it would have at the very least been able to die an honorable death rather than falling ingloriously in battle because of my careless mistakes.

While I didn't make the most egregious error of all time when I attacked with my Blade-Tribe Berserkers before killing a Myr, that didn't make it any less costly.

While Darksteel Sentinel isn't the kind of card that you need to lie awake in bed thinking about, or live in fear around, that doesn't mean you shouldn't take it into consideration when you are playing.

If I sniff a Darksteel Sentinel, or any other sort of high impact card, I will have no problem playing around it. The only issue is that I have a lot of trouble actually thinking about Darksteel Sentinel as a card to play around.

When Todd blew me out with his Darksteel Sentinel, it was the second game and it was the first point at which Todd had gotten to six mana. He simply passed the turn with six mana available. I should have thought that something might be up, right?

But Steve, you didn't see a Darksteel Sentinel in Game 1, so there is no way you could have known about it, right?

Often that would be true—but I had passed two Darksteel Sentinels in the draft and I hadn't seen any the previous two rounds—so I should have been on the lookout for the instant speed indestructible 3/3.

If I hadn't seen any Darksteel Sentinels during the draft itself, then I might be more willing to give myself a pass for not considering it as a possibility, but given that there were two unaccounted for Darksteel Sentinels floating around and it would have cost me literally nothing to play around them—my mistake becomes pretty flagrant.

Any time I see a Dispense Justice during the draft I will make a mental note of it and then I will take it into consideration while I'm making all of my subsequent play decisions against opponents who have white in their deck and are suspiciously leaving three mana open.

Dispense Justice sets off all sorts of alarm bells for me.

If my opponent leaves up three mana on the fourth or the fifth turn, I'm not going to attack in with my 4/3 flyer or my Molder Beast only to see it get dispensed for a mere

. Instead, I will simply continue casting spells, hold my creatures back and let my opponent choke on all of his or her wasted mana.

If I have the opportunity to attack in with a creature that I don't really care about—then I will generally have no problem trading it for a Dispense Justice. But if I'm put into a position where I have a "clear path" to attack in with a menacing creature, some more good threats in my hand and my opponent isn't casting spells—then I will pretty much always wait to make my attacks. 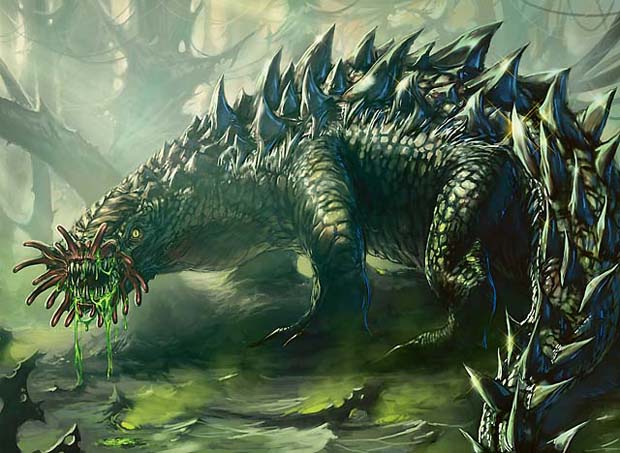 If I'm progressing my board and my opponent isn't, then I am probably going to win.

I will then wait for clues to see if my opponent actually has a Dispense Justice, or if he or she was simply bluffing it / lacking spells.

A little bit later in the game I might have to trade one of my better creatures for a Dispense Justice, but at that point it won't be nearly as upsetting of an exchange (as it will be kind of inevitable at that point).

Maybe you don't know whether or not your opponent has a Dispense Justice. Maybe you think that he or she might have countermagic instead.

In that case, you will need to decide if you would rather bait the countermagic by casting a threat or the Dispense Justice with an attack.

While, I'm often able to play with surgeon-like precision against opponents with Dispense Justice. I tend to play with the same levels of dexterity and critical thinking as a two-year-old trying to hammer a square into a circular hole when it comes to playing around Darksteel Sentinel.

They are both uncommons. They both end up in peoples' sideboards a decent amount of the time, and they both have the potential to have a huge impact on any game in which they are cast.

Darksteel Sentinel is actually an easier card to play around than Dispense Justice. It costs six and it can be answered by a wealth of different cards. And, if you decide to play around it for as little as a single turn then you will probably find out whether or not your opponent has it—as he or she is likely to cast it and begin attacking with it immediately rather than leave six mana up for the foreseeable future.

After you've been playing Limited for a while, you are generally able to take removal spells and Giant Growth effects into consideration without giving it too much of a thought.

If you're playing in a format where countermagic and/or bounce spells are found with alarming frequency, then you shouldn't have too much trouble taking them into account either.

But then there are lots of cards that you will only be able to play around if you consciously take the time to think of them.

A Day of Judgment / Wrath of God card can be pretty devastating, and they tend to be rare so they are "hard to see coming," but if you think that there is a good chance that your opponent has a sweeper effect, or that the only way your opponent could possibly win would be with a sweeper effect, you will be able to play accordingly by holding back some of your best creatures.

Similarly, if you are concerned that your opponent might be setting up an Overrun type card, you will know to force trades whenever possible.

I know to be afraid of cards like Day of Judgment and Overrun because of how huge of an impact they typically have on games in which they are cast.

I know how to play around Giant Growths and Lightning Bolts because of the frequency with which they are cast.

I know how to play around Dispense Justice because of years of experience, the fact that it's easily telegraphed and because it's the kind of play that makes me feel really smart.

I know how to play around a Darksteel Sentinel, but I often forget to because it comes up infrequently and even when it does come up it doesn't always have that huge of an impact. Often when I am playing around something else (like a Dispense Justice), I will incidentally play around Darksteel Sentinel.

Given that I just wrote an article on it, and I lost a crucial game to it—I know that I will now do a much better job of playing around Darksteel Sentinel.

Because I spent a lot of time thinking about it.

By spending a lot of time playing, reading, talking and most importantly thinking about Magic, I am able to improve my play considerably.

When I am immersed in Magic, I don't have to spend two minutes in the middle of a game trying to figure out what my opponent could possibly have, I already know what he or she could have and I can then spend my time figuring out which of those cards my opponent is likely to have.

So if you feel like your play is stagnating, try thinking about the game more when you are away from the table. Instead of thinking "oh man, my opponent had the (Darksteel Sentinel, Dispense Justice, Overrun)" try to think about what you could have done to prevent that negative outcome—and maybe next time you won't let your opponent mug you with a trick that you should have seen coming.