Bestow The Gift of Value

Posted in Limited Information on September 4, 2013

t comes up so quickly every time. I have been writing this column for a while now, and playing Magic again even longer than that. Still, every time preview week rolls around, I am taken off guard. As you will see by reading ahead, I have not one, but a full cycle of five cards to share with you today.

Theros is largely unknown at this point, but a few clues are starting to show up as cards are previewed. First, enchantments seem to matter. Enchantments are a relatively unexplored corner of the Magic world. They have been twisted and tweaked, but never pushed in a direction as hard as the cards we are going to talk about today.

Let's take a look at them before diving in: 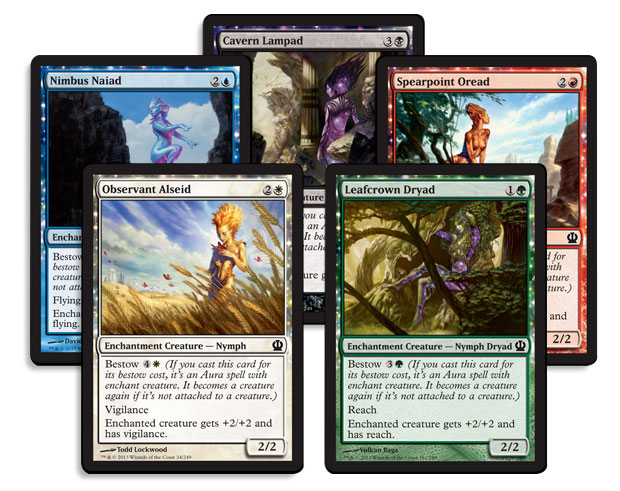 Here we have a full five-color cycle of common Nymphs, and they are more than just that. Take a look at their type:

It still kind of looks like a typo to me. Enchantment Creature? But those are different things.

Well, they were. Now they are merged into an interesting and complex marriage of risk and reward.

What is really going on here? What does it mean to be a creature and an enchantment? How does this even work?

First, since these Nymphs are both creatures and enchantments, they fulfill any requirements for either (or both) type. If you have a card that cares about how many enchantments you have on the battlefield, these will add to that count.

This is probably an upside, but there is also downside. Normally, cards like Naturalize are relegated to the sideboard, but in Theros it looks like cards of this type may do their fair share of destroying creatures.

Second, you will notice that they have different mana costs for their bestow cost and regular casting cost. This is where things get interesting.

We get to choose when and how we cast them:

Option One: We cast them as enchantment creatures.

This is the more straightforward option. We are used to casting creatures like these in Limited.

Option Two: We cast them as Auras.

Now it's getting weird. I can cast my Grizzly Bears as an Aura? And if the Aura falls off for any reason, it turns into a Grizzly Bears?

Yep, it sure does.

We can cast any of these for their bestow cost to turn any creature on our side of the battlefield into a formidable threat. If that threat dies, we get a nice creature out of the deal as a consolation prize.

One of the biggest upsides to these cards is that you get the option of casting them early in the game as a curve-filling creature or late in the game as a game-swinging Aura. This is usually an overlooked and underrated quality in a card. It reminds me of the evoke mechanic from Lorwyn, and that proved to be quite powerful indeed.

I assume that in most games of Theros Limited, we will be casting these in the early turns provided we don't have much else to do. But when the game goes a bit longer, they will make for awesome topdecks, in a spot where just the creature by itself would probably be a bit disappointing.

When we do land one of these after paying its bestow cost, the tempo advantage we gain can be game-breaking. Even though none of them actually grant the haste mechanic, they all will feel that way if resolved. Enabling a creature that couldn't attack—plus adding some type of combat-affecting ability—creates a huge and scary threat that simply didn't exist the turn before. Oh, and it can attack right now!

We have seen attempts to make Auras better in Limited in the past. Mechanics like totem armor have helped up the ante on Auras, but they still came with the same risk that Auras have always had: If your creature dies or leaves play while being targeted by the Aura, you just got two-for-oned. And that is the quickest way to lose a game of Limited.

In Theros, those days are over. We can now confidently slam our Bestow cards onto the stack, safe in the knowledge that even if something were to happen to our target, we still get a creature after all. That's only a one-for-one! And that is a lot better for us.

The risk is also reduced after we have successfully resolved a bestow card. How many times have you made a huge, sweet creature thanks to an Aura, only to have an Unsummon-type effect ruin your day? Those days are also over if you are packing some bestow cards. The bestow card will simply fall off and become an enchantment creature, ready to hold the ground until you can recast the original target.

The one way to really rain on this parade is through Pacifism effects—removal that lets the creature stay on the battlefield but otherwise renders it useless. We will keep a close eye out for removal of this nature, and if it goes up in value in Theros.

Let's take a look at each of them individually. 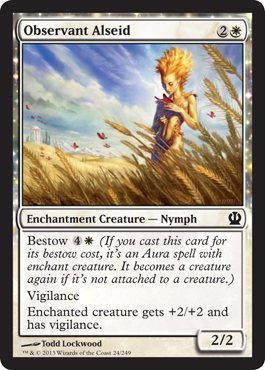 I'll be honest, the first thing that came to mind when I read this card didn't have anything to do with evaluating it, but it was more akin to pure dread at having to pronounce its name from the commentators' booth at the Pro Tour. You can call me Al?

This card feels like the weakest of the bunch. A 2/2 with vigilance for three mana isn't that exciting, and its bestow cost of five mana also isn't aggressively costed. This will be the one that sets the bar for me. If they are anything like the fuse cards from Dragon's Maze, the lesson to be learned is that they are just good cards with a lot of versatility. Otherwise, I imagine that they will fall into a customary hierarchy like most creatures do. 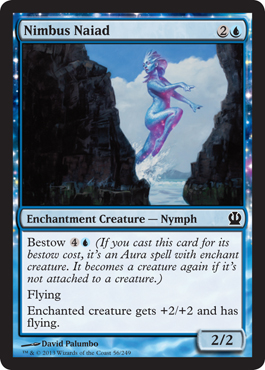 This is the exciting one. I'll admit, I love it when blue cards are good (see: Magic 2014) and I have to say that this one seems to be the best of the bunch. A Wind Drake in its natural form, it has a fair bestow cost and the best ability of the bunch: flying.

Flying has always been good, and it continues to be good to this day. I see no reason why that would change now. Even getting one hit in with a now-flying beater can end a game of Magic in short order. 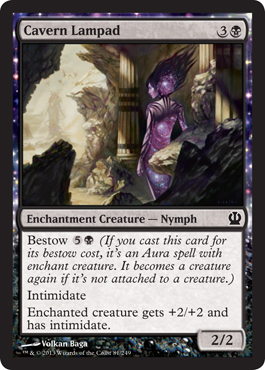 Intimidate is a lot like flying. Only a subset of creatures can block a creature with intimidate, and it's generally a solid form of evasion. Cavern Lampad costs a full mana more than Nimbus Naiad, and its bestow cost has an even higher premium attached to it. Still, if these are just good as flexible two-for-one type creatures, this one will see plenty of play just like the rest. 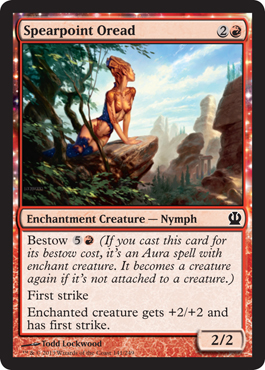 I like first strike. It's good on offense, good with combat tricks, and great on defense. Since this whole cycle is made up of commons, I could see nabbing three or four of these and setting up a pretty impenetrable wall of defense. The bestow cost is the full six, but landing this on anything with 3 or more power makes for a threat that is nearly impossible to interact with favorably in combat. 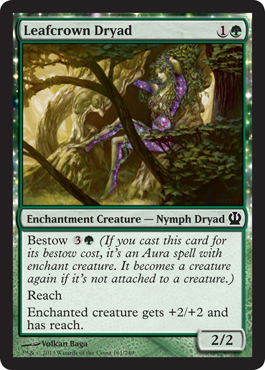 So we have a twist on the classic Bear here. In most Limited formats (hint: Magic 2014 is not one of them) a 2/2 for two mana is not only good, but also a staple. Reach is a bit disappointing compared to say, trample, but it suits a 2/2 body better. When it comes to using the bestow mechanic, trample would be considerably better in most circumstances, but lowering the cost to only four mana means that the +2/+2 bonus is the most important thing. This one seems solid to me, and I would expect it to see quite a bit of play.

These are the kinds of card that I really love for Limited. They are kind of crazy, different, interesting, and hard to evaluate at first glance. They add complexity and decision making to the game, and they challenge our ability to properly evaluate them.

My gut tells me that these will be quite good in Limited. I know I'll be drafting enough to find out, and I'll be sure to let you know once I do.

Posted in Limited Information on September 4, 2013