Breaking Down the Decks of Avacyn Restored, Part Two

lack is unambiguously the weakest color in Avacyn Restored Limited. But that little fact shouldn't stop you from winning with it.

Because of black's lack of depth in Avacyn Restored, a lot of players are simply unwilling to touch the color even if they're getting passed strong cards in it. This means opportunistic souls can often get high-quality black cards like Death Wind, Barter in Blood, and Blood Artist late. So if you're willing to keep an open mind, you can take advantage of these biases and end up with some fantastic decks.

What Kind of a Mono-Black Deck are You Drafting? 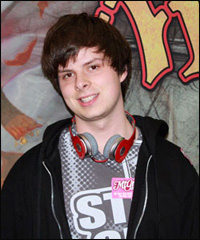 At Pro Tour Avacyn Restored in Barcelona, Grand Prix Dallas Top 8 competitor Korey McDuffie wound up drafting mono-black in both of his drafts. The result? A 2–1 finish with a strong, but very familiar-looking Mono-Black Control deck followed by a 3–0 with an aggressive Mono-Black Beatdown deck that was unlike anything I had seen up until that point.

When I interviewed Korey at the event, he explained that "The most important thing to know (about drafting Mono-Black) is that there are two kinds of Mono-Black decks: aggro decks (featuring cards like Soulcage Fiend), and control." 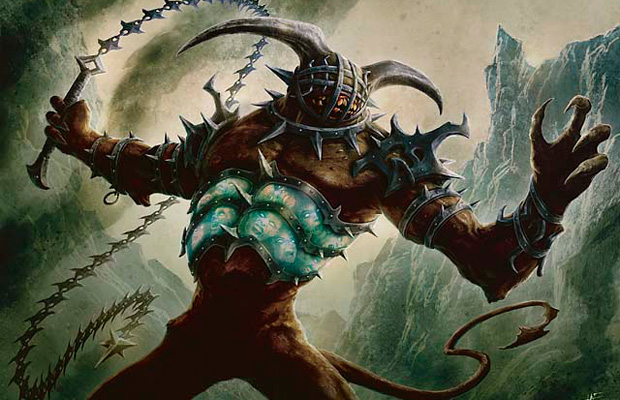 What does this mean for you? It means that once you've gotten those first few high-quality black cards that commit you to the most maligned color in Avacyn Restored, you're going to need to figure out exactly what kind of a deck you're going to draft. Are you going to snag those Soulcage Fiends and clobber your opponents to death? Or are you instead going to grab those late Grave Exchanges and grind out long, painful (for your opponent) victories with your control deck?

But I'm getting a little bit ahead of myself. First, let's go over some of the fundamental rules that apply no matter what kind of mono-black deck you're drafting. 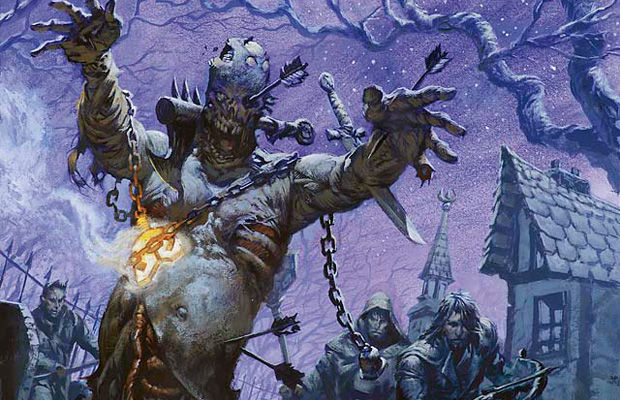 While Crypt Creeper is a necessary evil in the majority of mono-black decks, you would rather fill your deck with as many copies of Butcher Ghoul as you can reasonably get your hands on.

This harmless-looking 1/1 is actually an amazing tool to have on hand. It acts as an excellent blocker against Kruin Strikers and Vorstclaws alike. It works great with Bone Splinters, Corpse Traders, Bloodflow Connoisseur, Demonic Taskmaster, and Driver of the Dead—and it's particularly potent when you're using it to force your opponent to overextend into your Barter in Blood.

So yes, Butcher Ghoul might be a black Young Wolf that costs twice as much as the original, but within the context of the set it's actually one of the most important cards you can get your hands on.

There isn't very much good removal in Avacyn Restored. Because of this, decks like Blue-Green Soulbond, which require multiple creatures to live through every combat step, are able to thrive. 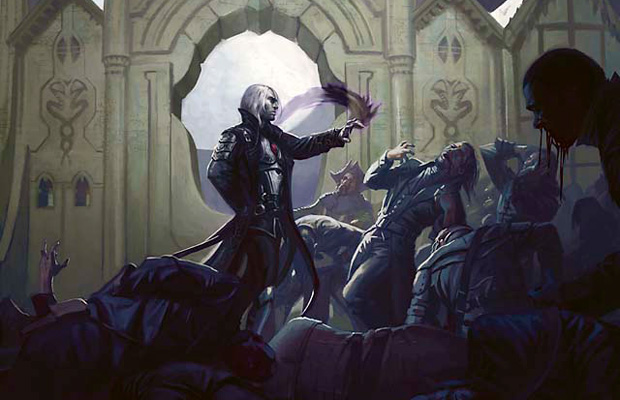 But black actually has quite a few good removal spells at its disposal. Barter in Blood is one of the highest impact cards in the format (particularly when paired with undying creatures and other removal spells), and Death Wind, while not earth shattering, is still capable of killing just about every creature in the set at instant speed.

Heck, even Bone Splinters becomes a first-pick quality card when you surround it with cards like Butcher Ghoul, Undead Executioner, and Driver of the Dead.

And if you are fortunate enough to get your hands on a bunch of removal spells, then the otherwise clumsy and expensive Grave Exchange becomes a game-breaking card that will help grant you inevitability against even the most resilient decks.

Because of the scarcity and the value of removal spells in Avacyn Restored, Barter in Blood, Death Wind, and Bone Splinters should all be top picks for you if you're drafting black. And if you weren't planning on drafting black, and you find yourself getting passed these premium removal spells late, then it just might be time for you to move into the color of Vampires and Zombies.

Sacrificing Your Own Creatures For Fun and Profit; or, If He Dies, He Dies

In addition to undying creatures like Butcher Ghoul and Evernight Shade, which serve as the backbone for most successful Mono-Black decks, there are also cards like Undead Executioner and Maalfeld Twins that have extremely strong effects when they die. 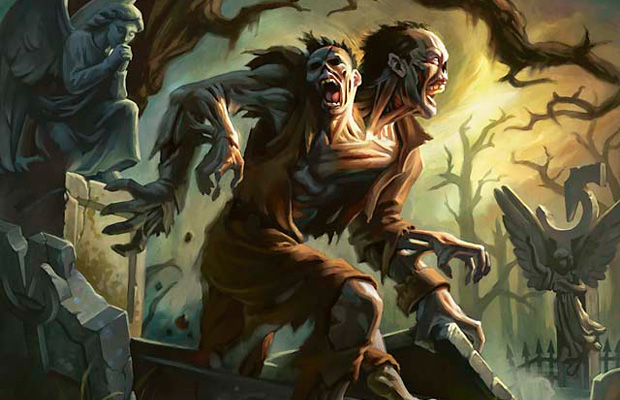 Because there are so many creatures in black you are indifferent—or even happy—to see die, you can get a ton of mileage out of everything from Bloodflow Connoisseur to Bone Splinters to Corpse Traders—or even Demonic Taskmaster.

So while you might have a visceral response that makes you unwilling to draft Demonic Taskmaster in anything other than a deck that wants to have exactly one creature in play at a time, so it can take advantage of Homicidal Seclusion or Demonic Rising, you're going to need to overcome that feeling in your gut and grab those Demonic Taskmasters.

No, Demonic Taskmaster might not ultimately end up being the right fit for your deck if you find yourself straddling the line between beatdown and control. But if you're playing an out-and-out aggressive deck, you're going to want it since it's an extremely potent threat that will help you close out games long before your foes can stabilize. And if you're playing a dedicated control deck, Demonic Taskmaster is a great way to lock down the board with only a single creature before you ultimately start beating your opponent to death with your 4/3 flier.

So you've spent your early picks drafting removal spells and two-drops. Now you need to decide if you want to grab that Soulcage Fiend and try to draft an aggressive deck or that Grave Exchange for what you hope will turn into a removal-heavy control deck.

Of course, you'll still have some time to reverse your decision (particularly if the next set of packs pushes you heavily in the opposite direction), but if you can help it, it will generally be in your best interest to pick a course and stick to it.

But in order to do that properly, you're going to need to be able to properly identify which cards shine in each of these archetypes.

Cards That Jump Up in Value in Black Control Decks

If it's your only removal spell, Grave Exchange should be close to unplayable. But if you have a half dozen (or more) other removal spells to go with it, then suddenly you've got an absolute gem that's worth crafting entire games around.

If you're able to keep your opponent's board clear until you hit six mana, Grave Exchange will allow you to take out your opponent's last threat (even if it's a regenerator with hexproof). And it lets you bring back the best creature in your graveyard. If that creature happens to be something like a Driver of the Dead or a Maalfeld Twins that leaves behind a miniature army when it dies, then it's going to be extremely difficult for your opponent to ever get back into the game.

Similarly, Homicidal Seclusion is an absolute all-star in any deck designed to exploit it. If you're able to keep your creature count low and your removal count high, your opponents are going to have to get off to extremely aggressive starts to have any hopes of beating you before your Homicidal Seclusion lets you take over the game. And even then...

If you're playing a controlling black deck that's looking to eventually grind out wins with cards like Grave Exchange and Driver of the Dead, you're going to need to make sure you live long enough for that to happen.

That's where strong defensive creatures like Haunted Guardian and Undead Executioner (which doubles as an excellent creature to sacrifice to Bone Splinters) come in.

No, you shouldn't take these defensive creatures over high-quality removal spells, but if your black control deck needs them then you shouldn't be afraid to take some good blockers over just about anything else in the set.

Cards That Jump Up in Value in Aggressive Black Decks

Soulcage Fiend is a dangerous card to include in your Black Control decks, but in aggressive black decks it's exactly the three-drop you should be looking for. Even if your opponent is able to deal with it, you're still going to take sizable chunk taken out of his or her life total.

If opponents don't have a way to deal with your Soulcage Fiend early and you have a couple of removal spells to clear the way for it, your opponent is going to have no choice but to sit and watch as you carve away their life totals 3 points at a time.

In tight races, Blood Artist has the ability to put your opponents right on the defensive—where you will eventually drain them out thanks to the very Blood Artist that stopped them from attacking in the first place.

While they might not be as good as Blood Artist, there's a handful of other cards, like Bloodflow Connoisseur and Angel's Tomb, that can do some very good work for you when you surround them with other creatures.

One important thing to keep in mind if you're playing Angel's Tomb is that it triggers whenever a creature enters the battlefield under your control. That means you can sacrifice a Butcher Ghoul to Bone Splinters precombat, then attack with your flying Angel. This is because, thanks to undying, the Butcher Ghoul returned to play under your control.

The Perils of Myopia

While I have a slight preference for drafting controlling black decks instead of aggressive black decks, I'm willing to grab Soulcage Fiends and draft my deck around them if I don't get the control pieces I need. And you need to be willing to make those same tough decisions if you want to win with Mono-Black decks.

If you don't, you're going to end up with some very underwhelming decks that aren't capable of consistently executing a game plan, when you instead could have put together some blazingly fast decks able to beat anything your opponents throw at them.