Breaking Down the Decks of Dark Ascension, Part One

Posted in Limited Information on February 21, 2012

ver the next few weeks, I'm going to take a look at the top archetypes in Dark Ascension Limited and go over some of the most important cards that lend to their success. 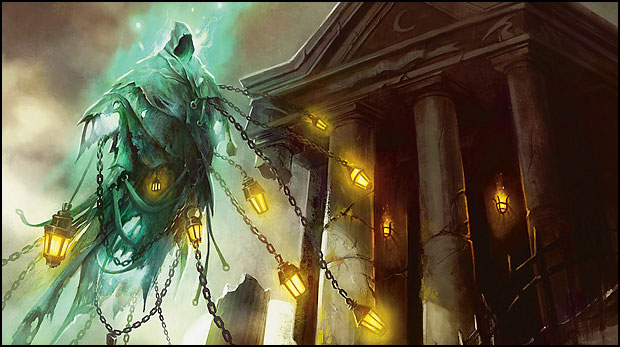 I plan to get through a lot of decks in a fairly short period of time, so I won't be highlighting every card you might want to play, nor will I be spending much time going into minute details about things like "What you should consider while selecting the twenty-third spell for your deck."

What I will be doing is going over the types of cards you should be looking to fill the (many, distinctly different) decks in the format and highlighting some of the cards that are noticeably less important in specific decks than they might appear to be in the abstract.

In triple Innistrad Booster Drafts, Green-White Beatdown was on the short list of decks that contended for the title of Best Deck in the Format.

With the incredible depth and power white provided, an abundance of good aggressive creatures, Prey Upon (it isn't every day that green has access to one of the best removal spells in the format), and the absolutely backbreaking Travel Preparations, it's no wonder people found it easy to win with green-white.

The release of Dark Ascension (and consequently, the loss of one pack full of Travel Preparations, Chapel Geists, and Prey Upons) has made green-white a bit worse than it used to be—but it's still very much a force to be reckoned with.

You can definitely put together a good green-white deck even if you don't get any copies of Travel Preparations... but it certainly makes the deck a lot better.

Any time you start on a two-mana creature on your second turn, a three-mana creature on your third turn, and casting and flashing back Travel Preparations on turn four, you're going to be in great shape (to say the least). Even if your opponent has a strong draw, you're still likely to win with that opening even if you don't have many good follow-up plays.

And even if you don't have your Travel Preparations on turn four to get your opponent backpedalling from the get-go, if you draw Travel Preparations later in the game you can use it to bump up your Chapel Geists and Orchard Spirits to dragon-like sizes.

You can play your green-white decks without any evasion creatures, but you really shouldn't.

If you get off to a quick start with your ground creatures, you want to have a way to win that doesn't require you to maintain a definite board advantage for the entirety of the game. Which is where your evasion creatures come in.

Evasion creatures give you a great way to punch through for those final points of damage during tight races and in games where your opponent is desperately trying to stabilize. And if you have Travel Preparations to boost them up...

Removal and Other Ways to Neutralize Problem Creatures

It's worth taking removal spells early, no matter what deck you're drafting, but the way you play your removal spells can vary pretty wildly depending on what your deck looks like.

In slower, more controlling decks, it is often in your best interest to save your removal spells for those creatures you absolutely have to deal with. But when you are playing an aggressive green-white deck, you will often want to use your removal spells to keep your offense moving fluidly (this is particularly important to do if your deck has a lot of cheaper cards that lack the raw power you suppose your opponent's deck has).

While you can live without Travel Preparations, evasion creatures, or even removal, you need a bunch of good one- and two-cost creatures for your green-white deck to function properly (usually three to seven one- and two-cost creatures will do the trick). If you know you're going to be waiting until turn three (during most games) to play your first creature, you're drafting something other than an aggressive green-white deck.

You want to avoid having too many spells that cost too much mana in your aggressive green-white decks. This means you can calmly pass good five-drops in favor of cheaper spells.

So while Silverclaw Griffin is a fairly good card—so are Hollowhenge Beast, Village Survivors, Grizzled Outcast, etc.—and since there's really no shortage of good expensive cards, you can wait to get it later in the draft.

You don't want to take instant-speed pump spells like Spidery Grasp, Break of Day, and Moment of Heroism too early. It's nice to have a pump spell or three in your deck (particularly if you don't have many, or any, copies of Travel Preparations), but it generally doesn't matter which ones you get.

Like aggressive green-white, White-Blue Beatdown decks are noticeably harder to put together now than they were before the release of Dark Ascension.

Feeling of Dread isn't as crucial to the success of white-blue decks as Travel Preparations is for green-white decks, but it's still unfortunate to lose a third of your chances at the card.

No, the real hit is how much weaker the aggressive blue—and to a lesser extent white—creatures are in Dark Ascension than they were in Innistrad.

The only good aggressive creature blue has access to at common in Dark Ascension is Stormbound Geist—and the selection doesn't get much better at uncommon. Or rare.

And while Stormbound Geist is a really strong card, that it costs

is a much bigger deal than you might think. The fact that Stormbound Geist doesn't play well with Loyal Cathar, Spectral Rider, (or even Chapel Geist, for that matter) is not an insignificant problem, as it can lead to some pretty awkward draws.

If you're drafting an aggressive deck, you need cheap creatures. But unless you have some good Equipment, a couple of copies of Feeling of Dread, or some other good ways to push through damage, you're going to want to make sure the majority of your cheap creatures are more than just vanilla 2-power creatures for two.

So be sure to stock up on Loyal Cathars, Avacynian Priests, and Cloistered Youths if you get the chance. You'll never regret filling your deck with cheap creatures that have a strong impact on drawn-out games.

White-blue decks tend to have an even stronger reliance on evasion creatures than green-white decks do, particularly now that you have fewer shots at Feeling of Dread.

It's really nice to pick up a piece of Equipment or two for your white-blue decks, particularly if you have a low curve (and can thus afford to spend time equipping your creatures) and a lot of evasion creatures.

Keep in mind that unless a top-notch piece of Equipment like Butcher's Cleaver or Silver-Inlaid Dagger makes its way in front of you, you shouldn't be drafting any Equipment before you get about midway through any given pack.

When you're drafting white-blue, green-white, or just about any other deck in the universe, you're going to want to stock up on removal spells. But not all removal spells are created equal...

More examples: Bonds of Faith, Slayer of the Wicked, and Burden of Guilt.

More often than not, if you're leaving up a bunch of mana for a Bone to Ash or a Rebuke in your aggressive deck, something probably went wrong. And while you ultimately might not end up with any better options for your aggressive white-blue, you still shouldn't be spending any early picks on cards like Rebuke.

While they doesn't suffer from the exact same problems Rebuke does, overpriced, undersized evasion creatures like Abbey Griffin offer similarly undesirable ways to use your mana (just play something cheaper than Abbey Griffin—you won't regret it).

Cards That Go Up in Value in Controlling White-Blue decks

If you aren't worried about swarming your opponent or winning tight races with evasion creatures, you'll be able to fill your deck with more defensive creatures. They (should), in turn, give you opportunities to make the most out of your reactive cards like Bone to Ash.

Just make sure you don't slow your deck down too much in the process...

Posted in Limited Information on February 21, 2012