Breaking Down the Decks of Dark Ascension, Part Two

Posted in Limited Information on February 28, 2012

ast week, I began my exploration of the top decks in Dark Ascension by taking a look at what makes green-white and white-blue tick. This week, I'm going to continue this series by going under the hood of Red-Green Werewolves and Black-Red Vampires.

Removal-heavy Limited decks can get away with playing as few as eleven or twelve creatures, provided the rest of the cards in the deck are quite good. Graveyard-based strategies like Burning Vengeance or Green- Blue-Black Mill Yourself decks can likewise function quite well with nine or ten creatures. But not every deck can thrive with a low creature count.

You need to have a critical mass of creatures for your dedicated Red-Green Werewolf deck to function properly. Otherwise, cards like Moonmist and Immerwolf, which are normally fantastic in the deck, become extremely mediocre. 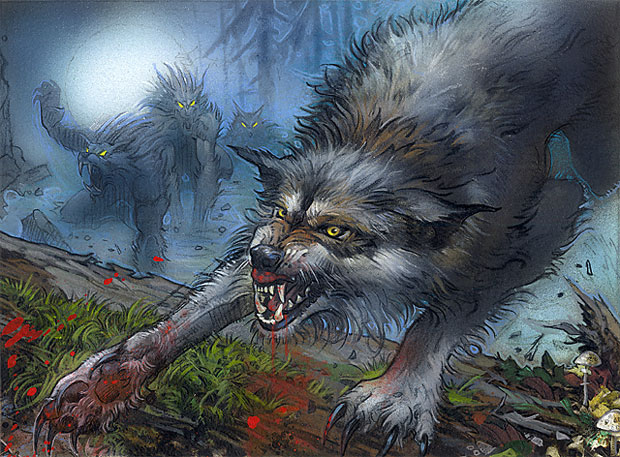 You should note it is possible to build a removal-heavy, creature-light red-green deck that has a good number of Werewolves in it. But if you are drafting a red-green deck that just wants to cram as many good removal spells and high-quality creatures into it as possible, you will need to value cards very differently than you would if you were drafting a deck specifically focused around Werewolves, Wolves, and Moonmists.

At Grand Prix Kobe, former Player of the Year and fourteen-time Grand Prix Top 8 competitor Yuuya Watanabe explained that "Moonmist is the most important card for the deck." And to back up his statement, Yuuya went as far as to take Moonmist with his second and third picks in pack two at the start of the second day.

By the way, Yuuya 3–0ed that draft and went on to Top 8 the tournament (before losing to eventual champion Masahiro Hiraga).

These are the types of creatures that even non-Werewolf players will take early in drafts. The more of these high-quality creatures you have, the better your deck will be. So even if you don't draw your key enablers, your Werewolf deck will still perform well if you are drawing cards like Gatstaf Shepherds and Pyreheart Wolf.

And if the draft doesn't go according to plans, and you end up drafting a non-Werewolf deck, you will still be happy to have a deck full of Villagers of Estwald and Darkthicket Wolfs.

Because of the need to fill your Werewolf deck with good, cheap, creatures (Yuuya explained that "you should have about sixteen to eighteen creatures, and you need ten or more Werewolves or Wolves for the deck to work"), it's worth taking these high-quality howlers over even really good removal spells.

To demonstrate this point, Yuuya took a Reckless Waif over a Geistflame at Grand Prix Kobe. This is a very counter-intuitive pick, but it's exactly the kind of pick you need to be willing to make if you're going to draft a linear, synergistic deck like Red-Green Werewolves.

While Hanweir Watchkeep and Hinterland Hermit are certainly better in dedicated Werewolf decks than elsewhere, these creatures can still serve as the backbone of a non-Werewolf deck. 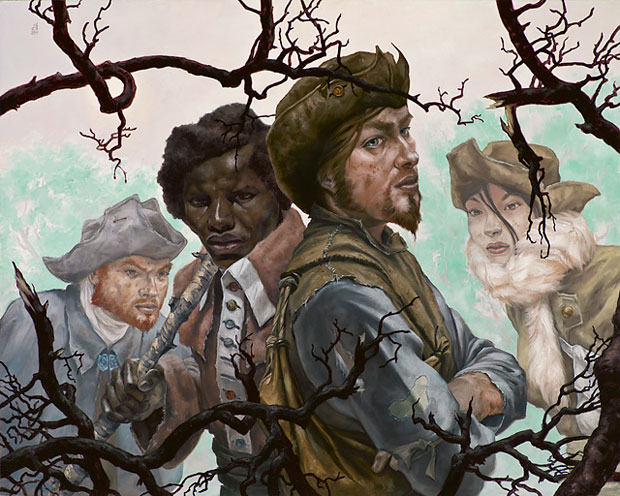 If you realize there's a chance you could end up playing Werewolves (but you haven't committed to the archetype yet), and you have the opportunity to take one of these decent Wolves or a card that is marginally better in an unthemed deck, then you should probably go with the Wolf. The upside of taking the Wolf (that you could end up with an awesome Red-Green Werewolf deck) far outweighs the upside of taking a card that is marginally better in isolation.

These creatures are playable in non-Werewolf decks, but they're pretty easy to cut in decks that don't have an Immerwolf or a Moonmist.

So while you should be willing to take Tormented Pariah fairly early if you know you are (or want to be) drafting Werewolves, you still shouldn't take these types of cards over key removal spells or high quality non-Werewolf creatures unless you are certain you need more Wolves for your deck to function properly.

Good non-Wolf creatures are still a welcome addition to Red-Green Werewolf decks, particularly if they have natural synergies with your Werewolves.

Ambush Viper is very strong in aggressive Werewolf decks for fairly obvious reasons. It's an aggressive creature that can be played at instant speed, allowing you to put pressure on your opponent early or "take a turn off" from casting spells to flip your Werewolves, while still using your mana to play something relevant.

Other good creatures, like Rage Thrower or Skirsdag Cultist, allow you to craft entirely new game plans by giving your creature-heavy deck a way to win even if your opponent has made it impossible for you to attack profitably.

You should take premium tricks and removal spells, like Brimstone Volley and Prey Upon, over everything but the best Wolves or key enablers like Moonmist.

It will usually be worth it to take good Wolves, however, over mid-level removal spells (like Blazing Torch, Harvest Pyre, or even Geistflame) because of the deck's hunger for a ton of good creatures.

So next time you set out to draft Red-Green Werewolves, don't think the deck will magically fall into your lap—you're going to need to make some tough, counterintuitive picks in order for the deck to really shine.

If you get through the first pack of a Draft and you think you're drafting a dedicated Werewolf deck, you're usually going to end up with a dedicated Werewolf deck. Of course, sometimes you will end up with a non-Werewolf Red-Green Beatdown deck (or a total train-wreck of a deck). But, in general, if you set out to draft Werewolves and you aren't fighting multiple other people at the table for the deck, you're going to end up playing Werewolves.

The same rule doesn't really hold for the other tribal decks in Dark Ascension/Innistrad Limited.

Even if you get halfway through pack one and you think you're drafting Vampires or Zombies, you might just end up with a small Vampire or Zombie sub-theme in a removal-heavy black-red deck or a Blue-Black Mill Yourself deck.

For that reason, you won't need to make very many counterintuitive or speculative picks during the course of the draft. 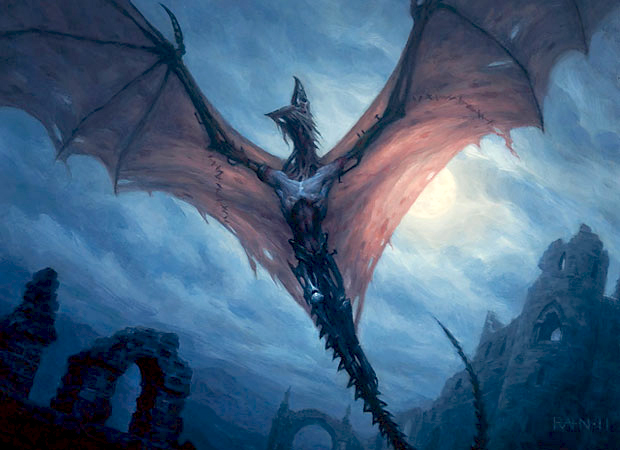 Sure, you might take a Rakish Heir or a Stitched Drake with an early pick over a card that's slightly better in decks that don't have the proper supporting cast, but in those cases it will be (relatively) easy to understand the implications of your choice.

Every so often, you would see someone draft a good Black-Red Vampire deck in Innistrad. That player would open on Vampire Interloper and Rakish Heir, and clear the path to victory with top-notch removal spells like Dead Weight and Brimstone Volley.

But, most of the time, when people set out to draft Black-Red Vampires in Innistrad, they would end up sorely disappointed. That's because, even if the deck was completely available to them, there was no guarantee the eight players in the Draft would open up enough good cards for the deck.

With the release of Dark Ascension, that has all changed.

Because there are so many good black and red removal spells in Dark Ascension, players can now consistently draft good Black-Red Vampire decks (at least as long as there aren't too many players fighting over the archetype at the table).

Good removal spells are the backbone of most successful black-red decks. 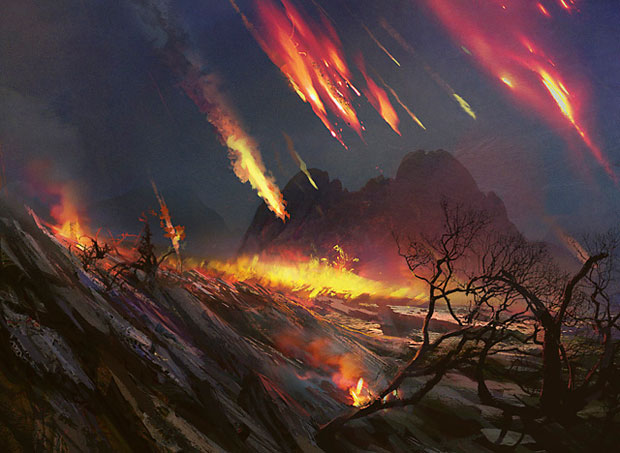 Unless you are able to fill your deck with a TON of good aggressive creatures, and ways to force them through (like Crossway Vampire and Markov Warlord), you're going to need to pick up a good amount of removal spells if you want your black-red deck to reliably outperform opposing decks.

When you're playing Black-Red Vampires, you're going to want to take these standout removal spells over everything except the bombiest of creatures like Bloodgift Demon, Bloodline Keeper, or (sometimes) Instigator Gang.

You want to take cards like Tragic Slip or Brimstone Volley over just about everything. But you can (somewhat) comfortably take key creatures like Stromkirk Captain or Vampire Interloper over good, but not great, removal spells like Wrack with Madness.

Removal spells are awesome, but conditional removal spells like Corpse Lunge leave a lot to be desired, particularly if your deck is low on creatures.

Even though it might be a bit tempting to grab literally every removal spell you see, you shouldn't take cards like Corpse Lunge or Harvest Pyre over good creatures in Black-Red Vampire decks.

If you're drafting black-red, you should be willing to take Stromkirk Captain pretty early (although you shouldn't take it over top removal spells), and if you're on pace to end up with a good number of Vampires, then you shouldn't hesitate before grabbing any Rakish Heirs that make their way to you.

The creatures in red and black just aren't great. So if the game drags on, you're going to need a good way to break through. Fortunately, creatures like Markov Warlord, Falkenrath Noble, and Rage Thrower are able to fit that bill quite nicely. 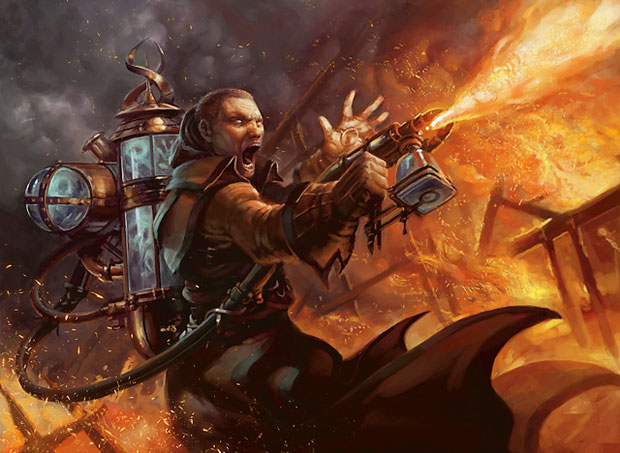 So if you have the opportunity to pick one (or two) of these key game-breaking creatures, you shouldn't hesitate to do so. After all, you want to have a good backup plan.

In Dark Ascension Limited, there just aren't that many red or black creatures that excel in the late game, so it's usually better to build aggressive black-red decks than to build controlling ones.

And in order to do that, you're going to need to aggressively draft cards like Vampire Interloper and the plan-destroying Crossway Vampires.

Unless you end up with some Stromkirk Captains or Rakish Heirs, there's really no reason for you to prioritize Vampires over non-Vampire creatures (Vampiric Fury is fine if you have a critical mass of vampires, but it really isn't something you want to warp your deck for). 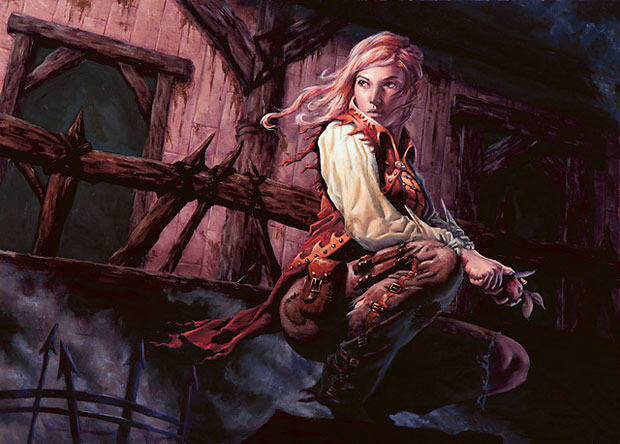 So if it doesn't look like you have a strong need for Vampires, then go ahead and grab whatever good creatures you can get your hands on. If you have enough good removal spells, you shouldn't have much trouble winning with whatever aggressive creatures you've filled your deck with.

Posted in Limited Information on February 28, 2012