Posted in Limited Information on February 2, 2010

ike many of you, I woke up bright and early on Saturday morning to get my first chance to play with Worldwake. Unsurprisingly, I had a great time.

I absolutely love Prereleases. There are friends who I pretty much only get to see at Prereleases—I've gotten to reconnect with people that I haven't seen since I was playing Necropotence in Extended or Blastoderm in Standard. And, of course, I get my first chance to play with the new cards.

Whenever I go to a Prerelease, there are bound to be a number of new cards that truly excite me. The Treasure Hunts, the Loam Lions, the Kor Firewalkers, the Urge to Feeds, the Jace the Mind Sculptors, the Arbor Elves, etc. This excitement is a big part of why I look forward to prereleases. I know that there are going to be a bunch of new cards that I'm going to enjoy playing with for months or, in some cases, years to come.

I can expect that.

But every once in a while they reprint a card that really brings me back. It doesn't necessarily have to be something flashy, a bomb or even something that I can build a deck around. It just has to bring me back.

Smother, on the other hand, is a card that really brings me back. I'm very happy to see Smother return. I have very fond memories of pointing Smothers at everything from morphs to Sparksmiths to Nantuko Husks to Timberwatch Elf (not to mention the Wild Mongrels and Psychatogs that I would kill in Constructed). While I didn't open a Smother myself, just having one cast against me put a big ear-to-ear grin across my face. 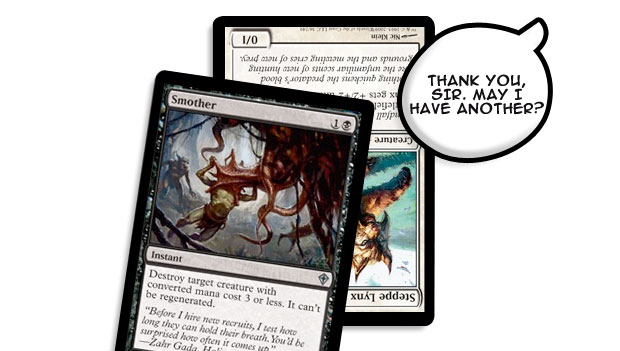 I can't tell you exactly why Smother had that effect on me, I wouldn't have described it as one of my favorite cards from the Onslaught era, it's just one of those cards that was really representative of the era for me.

While Smother might not seem quite as exciting now in a world populated by Lightning Bolts and Urge to Feeds, it's still a very impressive removal spell that will be worth taking very early in Limited and will likely have Constructed applications.

While I was gunslinging at Gray Matter Convention's New York Prerelease I opened up the following pool.

Those of you who read my article last week might notice that I went against the very advice that I gave about ideal color distribution in sealed. While I was looking to build a deck with a 12-6 mana base, this pool didn't leave me many options.

I briefly considered playing my allies, in large part because Agadeem Occultist seemed like it would be a ton of fun to play, but I ultimately decided that my five allies just didn't offer enough upside for inclusion (if I had had one or two more decent black or white allies, I probably would have ran them). Once I had decided against the allies, I felt pretty boxed into a corner. I could play a little bit more black or white, but I didn't have enough cards to significantly weight my deck in favor of one color or the other. While being able to play a tenth black source or a tenth white source would have been nice, it wouldn't have made a significant enough of a difference to justify doing anything other than playing what I saw as the best cards in my two colors.

Needless to say, poor mana draws were a critical factor in the majority of my losses. I was playing a pretty straightforward black-white beatdown deck that didn't have too many stringent mana requirements. But when you are playing an aggressive deck, it is incredibly important to be able to cast your spells in a timely manner. If you hiccup even a little bit, things tend to fall apart pretty quickly. You see, those two mana 2/2s just aren't going to be all that great if you can't cast them till turn four.

Aside from some mana problems, and the occasional equipment-heavy/creature-light draw (it's pretty embarrassing to have three pieces of equipment on the board and not a creature in sight) the deck played very smoothly. It's very possible that I should have played my Perimeter Captain (who is likely to become a top pick for a number of slower archetypes), but I was still quite happy with all of the cards that made their ways into my deck.

I was initially a bit hesitant to run my Corrupted Zendikon. I wondered how good could a card be that ties up your land and is only a 3/3? Turns out it can be pretty darn good.

Zendikar and Zendikar/Worldwake Limited decks tend to run 18 lands because it's important to cast your spells in a timely manner in such a fast format, and because lands tend to have utility even late in the game thanks to landfall. It's not because players typically need a ton of lands to cast their spells.

I would gladly pay four, or in some cases even five mana for a 3/3 creature with haste. So why not pay three for it?

At times Corrupted Zendikon would be one of my final plays, not coming down until the fifth or sixth turn because my mana had been pretty tight the whole game. But in that case, not only is Corrupted Zendikon still good, but it's usually indicative of a situation in which things of been going quite well for you because you've had good things to do with your mana for many consecutive turns. 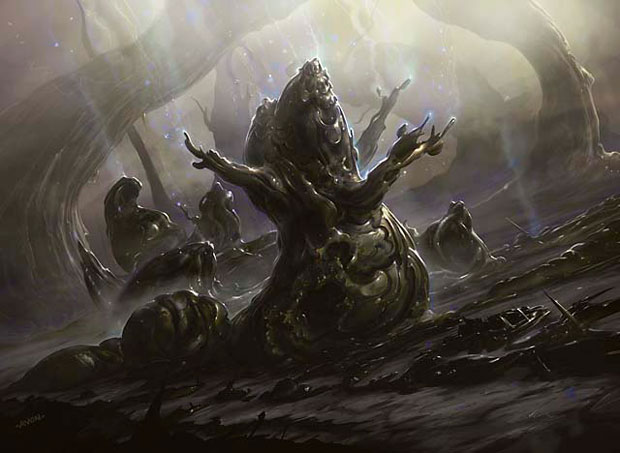 If, on the other hand, the reason why you haven't had a chance to cast Corrupted Zendikon for a number of turns is because you've been somewhat mana screwed, then it's still preferable to a four- or five-drop because you will have the opportunity to cast it while you wait for the lands you need to cast the rest of your spells (even if you have to use it as a land a couple of times).

Corrupted Zendikon is definitely worth including in your Sealed Deck, and it will probably be a fairly early pick in draft. 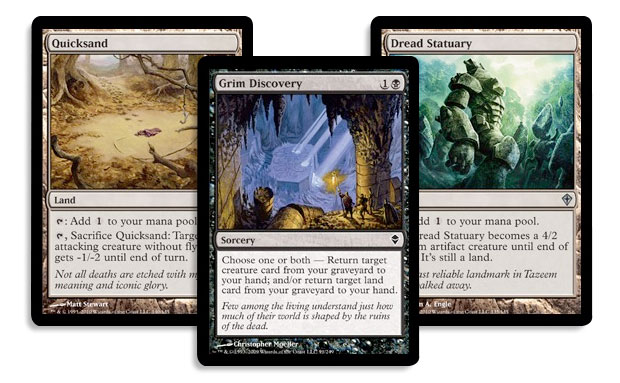 Another card that I was very impressed by was Grim Discovery. Grim Discovery got significantly stronger now that Quicksand, Dread Statuary, rare lands such as Lavaclaw Reaches and even Tectonic Edge are running about. I won a number of games in large part because I was able to bring back a key creature AND my Dread Statuary.

The card that surprised me the most last weekend was Walking Atlas. The first time that one of my opponents played it, I thought that they had made a mistake by including it. Then it proceeded to have an enormous impact on the game.

If it just allowed you to accelerate a bit, it probably wouldn't be very good. But when you get to use it to trigger landfall and block Surrakar Marauders, it becomes very worthy of your time.

While I had a number of exciting and interesting games while I was gunslinging, none of them were too crazy, the highlight of my day probably occurring when I got to Hammer of Ruin away my opponent's Hammer of Ruin (which, if you're wondering, is as awesome as it sounds).

But that doesn't mean there weren't crazy games to be found.

Are you tough enough?

It's important to note that one-toughness creatures are somewhat weaker with Worldwake in the mix. That means that Surrakar Marauder, Goblin Shortcutter, and friends are likely to go down in value by a noticeable amount. Not only are there a lot of good 1/1 utility creatures that are excited to trade (such as Walking Atlas and Pilgrim's Eye), you also have to worry about cards like Cunning Sparkmage which specifically put the hurt on one-toughness creatures. This is probably going to be a bigger deal in Sealed, where people are a lot more likely to have some new utility artifacts in their decks. However, it is still something worth keeping note of when you're drafting.

Within a few minutes of being at the Prerelease, I saw members of the judging staff cracking open boxes and boxes of land to put out for players. Had they accidentally miscalculated the number of players in the Prerelease flights and not set out enough lands for them?

I looked at the land table and I saw plenty of lands, so that wasn't the problem. Then I looked closer. While there were literally hundreds of Plains, Islands, Mountains and Forests lying out, there wasn't a single Swamp in sight. As it turns out, black is a very popular color in Zendikar/Worldwake sealed.

And rightfully so at that, black has a ton of playable cards as well as some of the best cards in both Zendikar and Worldwake.

This has a couple of implications. The most obvious of which being that swampwalkers are quite good in Zendikar/Worldwake Sealed. So if you have any Bog Tatters that you're on the fence about playing when you're at a launch party, put 'em in. You won't be disappointed. 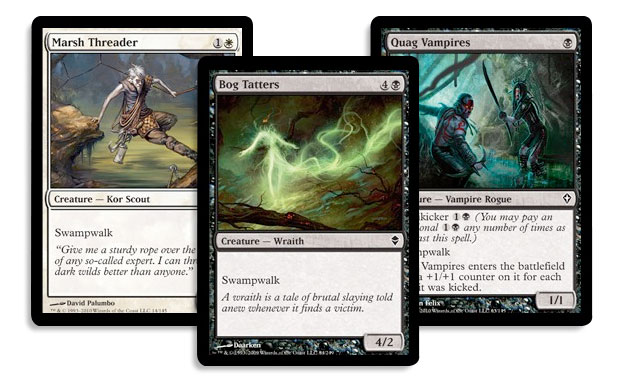 Further, because swampwalkers are going to be pretty popular, if you are on the fence between playing or not playing your black, you might want to stay away from those Swamps (at least for Game 1).

I haven't had enough experience with the set yet to know all the implications of this, but it's without a doubt an important thing to keep in mind while you begin exploring the set.

I'll be sure to report back to you as soon as I know more about how this slowdown will affect the format.

Until next time,
Happy Worldwaking!

Posted in Limited Information on February 2, 2010