Can I Kick It?

Posted in Limited Information on December 15, 2009

Sure, if you have the option of casting a different spell that has a similar effect at that stage of the game but doesn't have the same late game upside, then your choice is clear.

But if your choice is between using a card for a reasonable effect now or doing nothing now and getting an abstractly more powerful effect later, things can get pretty tricky. Cards with kicker frequently put you in this position.

... but that doesn't mean you always should.

When I was first getting into competitive Magic, a lot of the decks that I played had four copies of Kavu Titan in them. I absolutely loved Kavu Titan. I could play it early when I wanted a "bear," or I could play it later and get a frightening 5/5 creature. It was extremely flexible and quite powerful for the formats that I was playing it in.

Or I should say it was extremely flexible and quite powerful for other players who were playing with Kavu Titan in their decks. 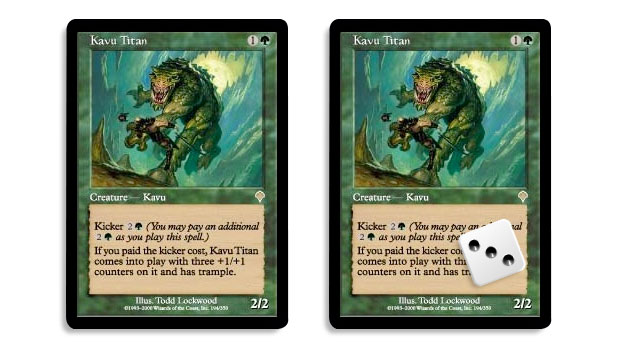 Over time I gradually came to understand that my Kavu Titans were often better as 2/2s for two than they would be as 5/5s for five, but looking back on it there's no way that I was playing my Kavu Titans with anywhere near the proficiency that I thought I was.

While my lack of proficiency with Kavu Titans was caused in large part by my inexperience, I wouldn't say that it was my fault. It's really hard to figure out when you should wait to kick a Kavu Titan. I don't think that I would have had the skills to play Kavu Titan consistently well until well after Kavu Titan had rotated out of Standard.

Just like Kavu Titan, it is very difficult to play Torch Slinger properly.

Off the top of my head I can think of at least two games that I've lost in Zendikar Limited because I held onto my Torch Slinger when I should have simply played it as a Gray Ogre. Both of those times I trapped myself thinking about how much more value I would get out of my Torch Slinger by waiting to kick it. I would get to kill a whole extra creature if I just waited a couple of turns. How could I turn down that kind of a deal? 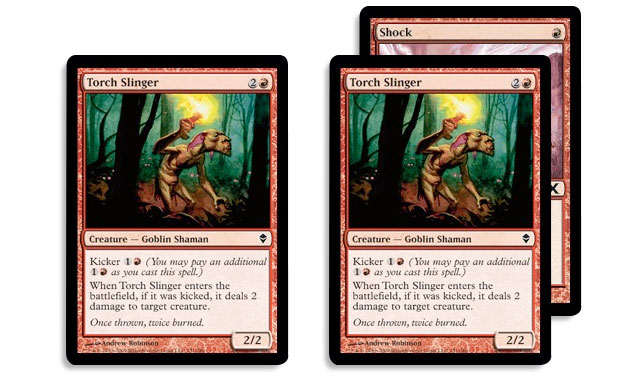 The problem that I ran into in those games is that I didn't calculate the true cost of my actions. The thing is, if you're going to have to give up 4 or 6 life because you won't have that blocker, then you should probably be strongly considering casting your Torch Slinger on turn three if you don't have any other viable plays for that turn.

Remember, in the situation where you pass on turn three without making a play instead of deploying your Torch Slinger you are giving up a total five mana to get that extra effect out of your Torch Slinger, not three.

By not doing anything on turn three, it appears as though you are giving up three mana to hold onto your Torch Slinger until you can get a Shock out of it. And in one way you are, but in actuality, you are expending a total of eight mana (the five that you use to cast it with kicker, and the three mana that you wasted by passing turn three with no effect) in order to get that same 2/2 creature that you would have gotten on turn three, with an extra Shock added.

Æther Figment doesn't present the same degree of difficulty that a card like Torch Slinger does. Eight times out of ten you're probably going to want to wait till you have five mana to kick up the unblockable Illusion. The exceptions will come when you are exceptionally mana screwed, in need of a creature to block your opponent's 2/1, planning to cast a Kor Skyfisher later, looking for a creature to throw a piece of Equipment on, or somesuch. The rest of the time you will (probably) want to simply sit and wait until your 3/3 unblockable can come out to play.

Kor Sanctifiers can offer up some very interesting questions. It has potentially enormous value if you can wait to kick it up and destroy a Journey to Nowhere, a Trusty Machete, a Savage Silhouette, or a powerful quest. But it also might sit in your hand while you wait and wait and wait for your opponent to deploy an artifact or enchantment until eventually you cave in and cast your 2/3.

So how do you figure out when it's worth it to cast a card like Kor Sanctifiers early, and when you should wait in the hopes of kicking it later?

In order to figure this out, you have to ask yourself whether the 2/3 body will actually have an immediate effect on the game. Will it dissuade your opponent from attacking, or allow you to get some extra damage through? If the answer to those questions is no, then you probably won't want to cast your Kor Sanctifiers yet. If the answer is yes, it will have a noticeable impact on the game, you will then have to ask yourself just how big of an impact it will be. 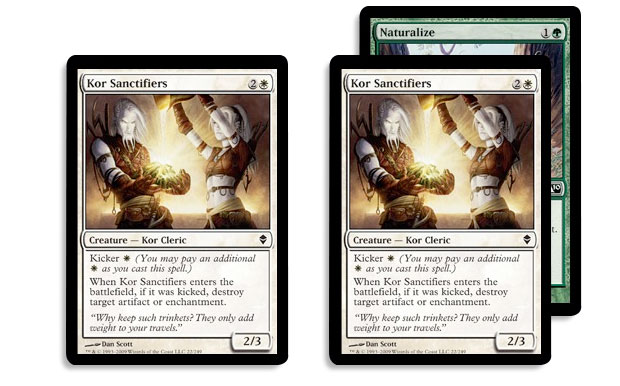 Next time that you are about to pass your turn without casting something in order to kick a card later, take an extra moment to calculate what you are giving up. Ask yourself: How much damage will you take, or miss out on? How much total mana are you giving up to try to kick your card later? When will you actually be able to cast your kicked spell?

Once you've gone through those questions, try to calculate how much additional value you will get out of waiting to cast your spell kicked. While you are doing this, be sure to keep in mind when you think you will be able to kick it. You might have the opportunity to kick your spell at a foreseeable point in time (when you play your fifth land to kick Æther Figment) or at an unforeseeable point in the future (when your opponent plays a juicy target for Kor Sanctifiers).

Once you've calculated both sides of the equation, you should be ready to make an intelligently thought-out play. While there isn't necessarily a right answer in this type of situation, so long as you are asking the right questions you will be able to make a good play a significant amount of the time.

To All the People Who Can Quest

Well, if you can maximize the effect of a card by casting it right now, then you should probably not hesitate to do so, right?

Not exactly. Let's look at another type of card: Quests.

Quests require you to make an investment now in order to get a large payoff later. Your quest will not have any sort of effect for you until it's picked up enough quest counters for you to activate it.

But what are you giving up now in an effort to get something later? And what happens when later never comes?

But what if you draw a relevant two- or three-mana creature? Do you still cast Zektar Shrine Expedition, or do you deploy your freshly drawn critter and let your quest rot away in your hand?

Stranding a quest is a very frustrating thing to do. But sometimes the quest that's in your hand just doesn't fit in with your game plan.

In a way, quest problems present the opposite of the kicker dilemma as you are given the opportunity to play a card now that will pay off greatly in the future. But if you look at it a different way, you will find that this type of problem has the exact same characteristics as the kicker dilemma, as you are once again given the opportunity to sacrifice short-term development in favor of maximizing the long-term effects of one of your cards.

There are times when it can be really difficult to figure out when you should cast your Allies.

Imagine this situation. It's turn two, you have a Plains and a Mountain on the battlefield, and your hand consists of a Makindi Shieldmate, an Ondu Cleric, a couple more spells, and a couple more lands. Do you cast the Ondu Cleric now, or do you wait on the life-gaining Ally for a bit until you can use it to put some +1/+1 counters on your creatures?

Again, there's no clear answer. You have to take situations like that on a case-by-case basis.

As You Inhale like a Breath of Fresh Air

Attempting to maximize the value of each of your cards individually can often lead to disastrous results. Cards don't exist in a vacuum; rather, each card that you have plays an important role in the context of the game at hand.

You want to maximize the value of your cards in relationship with one another as a part of a grand, overarching strategy. At times that strategy will involve maximizing the effects of each of your cards in isolation, in order to win a long war of attrition with your opponent. And other times a lot of your cards will be played for little effect in an effort to maximize the impact of a single card that you know you will be able to ride to victory.

The simple act of trying to understand your larger game plan will allow you to figure out how you have to value each of your cards.

So if you're going to take a bunch of damage if you choose to wait and kick your Torch Slinger in a deck that already has a really strong late game, just cast it! 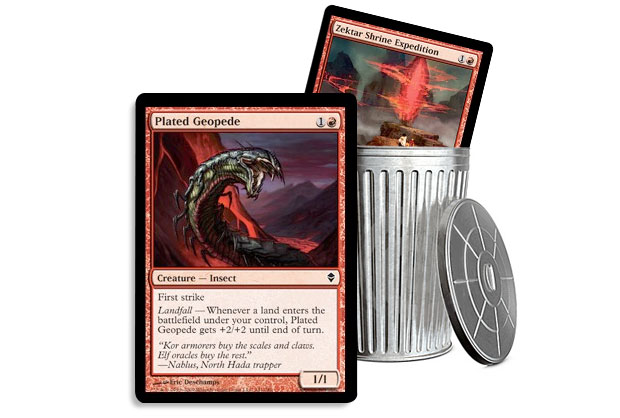 If you think you can get more damage out of your freshly drawn Plated Geopede than you can out of your Zektar Shrine Expedition, then cast the Plated Geopede, even if it means essentially giving up on one of your cards.

If you feel like you're in no danger of dying early but you're worried about your ability to break through for damage, wait to cast your Ondu Cleric until you can use it to put some +1/+1 counters on your other Allies.

I, along with the rest of the Daily MTG crew, am going to be on vacation for the next two weeks. During that time, I'll be doing a lot of eating, sleeping, drafting, and studying for my GREs.

I can't wait to see you all again in 2010. In the meantime, happy holidays!

Posted in Limited Information on December 15, 2009