The Case for Three Colors

hyrexian-mana cards let you do some funky things with your mana. When you only have a handful of cards that require mana of a specific color, you can safely splash in ways you ordinarily wouldn't.

I did a draft last week where my first six picks were Porcelain Legionnaire, Artillerize, Spined Thopter, Whipflare, Vault Skirge, and another Vault Skirge. Six cards into the draft I only had two cards that required colored mana. These cards were both red, they required only a single red mana to be cast, and they were both quite good in the late game. (I should mention that it's possible I am dramatically overvaluing Whipflare, as there are a lot of decks that rely purely on artifacts to fill out the low end of their curves.)

At this point in the draft, roughly half way through pack 1, the only things that I could say with any reasonable degree of certainty were that I was drafting a beatdown deck, and that I was going to play at least three or four red mana sources to support my Artillerize and my Whipflare.

At the end of my draft I wound up with the following 23 spells for my maindeck:

Yes, there are some—how do I put this?—not-so-hot cards in this deck, but they are in there for a reason. Did I want to run Brass Squire with only two pieces of Equipment, or Hovermyr? Not particularly, no. But I needed some more cheap artifact creatures to help make sure that I could both trigger my Glint Hawk Idols and get to metalcraft for my Concussive Bolt and my Blade-Tribe Berserkers.

Did I want to run a Concussive Bolt and a Necrogen Censer in my deck? Most definitely! While the majority of decks will tend to either choke on non-recurrent damage sources or use them as win-more cards, my deck absolutely needed some good finishers so I would be able to close the game out if my opponent dealt with my initial onslaught, or win a race after I caused myself to lose a bunch of life with my Phyrexian-mana cards and my Necrogen Scudders.

While I would have preferred to have had some premium removal spells instead of the burn spells that I included in my deck, there weren't any Grasp of Darknesses or Galvanic Blasts for me to grab.

But enough about the spells themselves. Can you guess what lands I played?

I didn't mean to go into white this draft, but, even though I was solidly in red-black going into pack 3, there were a couple of picks where I had no choice but to take Glint Hawk Idols. Once the idols were in my deck, however, I had little reason not to run them as I had quite a few artifacts to trigger them, and I was in a position where I could easily stick some Plains into my otherwise completely red-black deck.

It's definitely easier to go three colors now that we have a pack of New Phyrexia to work with. If you set yourself up to be incredibly open going into pack 2 (by filling your deck up with artifacts and Phyrexian-mana cards) then you could easily end up with only a handful of colored cards going into pack 3. When you finally open up your Scars of Mirrodin pack you will be able to grab any bombs that you are fortunate enough to open, as well as any top-notch removal spells, like Arrest, that you get a peek at.

If you have two- and three-drop creatures in three different colors, you are going to get yourself into a lot of trouble. Sure, there will be games when you open with a Forest, a Plains, and a Swamp and you can magically cast all of your spells, but unless you have some serious fixing, you are going to want to keep your early-game cards confined to one or two colors and spread out your late-game spells between the rest of your colors as the situation calls for it. 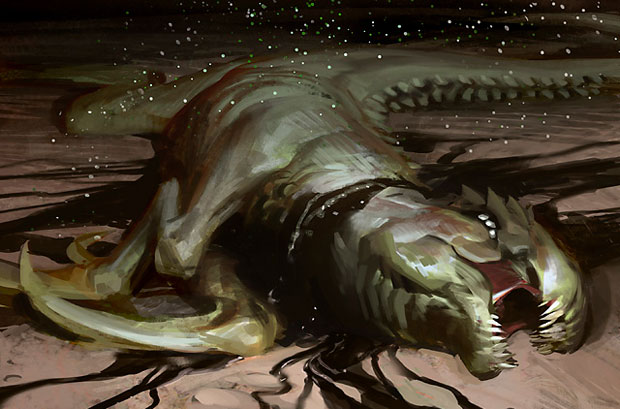 If you can't cast your cheap creatures early, you will fall behind because your opponent is developing his or her board at a faster rate than you are. Worse, you will be forced to further jeopardize your position as you use multi-purpose removal spells on reasonable, but not too impressive, creatures that you would have otherwise traded with in combat. You will also be forced to spend time in the middle or late stages of the game deploying the cheap creatures that were rotting away in your hand early, thus leaving you without the opportunity to cast (or bluff) instant-speed removal spells that could break up your opponent's biggest turns.

One of the most exciting things about the Phyrexian-mana cards in New Phyrexia is that it's now possible to have a high-quality early game that is completely colorless. So even if you're missing your "main color" for the first few turns of the game, you probably won't have to miss a beat. 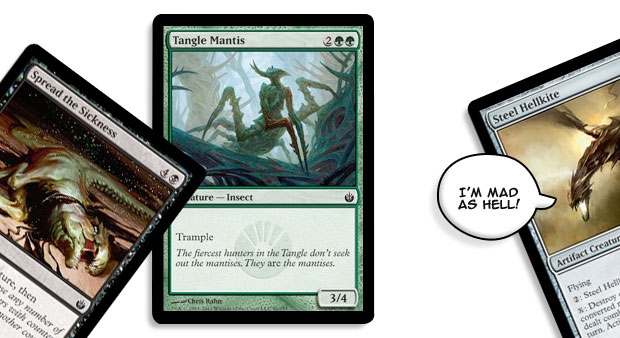 There are plenty of situations where being unable to cast your removal spell, or your bomb, until late in the game will actually be a blessing in disguise. It will frequently seem like you "have to" use your removal spell right now to press a marginal advantage, or to avoid falling a little bit behind. While there are certainly times when it is correct to Spread the Sickness your opponent's Tangle Mantis, if you make this play you will frequently find yourself on the wrong end of a very, very mad Steel Hellkite only a few turns later. While it is certainly preferable to at least have the option to cast all of your spells as quickly as possible, patience (even if it's forced upon you) is typically rewarded.

Similarly, if you are able to deplete your opponent's supply of removal before you cast your game-ending Demon or Dragon, then you'll likely be able to win after just a couple of quick attack steps. Your opponent might be hesitant to trade his or her 5/5 in combat, and will consequently use his or her best removal spell to clear a path for it. Once this happens, your opponent will (in many cases) be helpless to defend against the game-breaking threat that you've been itching to cast.

All this means that while it would be pretty dodgy to try to put together a three-color beatdown deck in most Limited formats, if you are able to pick up a good number of Phyrexian-mana creatures in the first pack, then you could find yourself in a prime position to hold off picking a base color until your Mirrodin Besieged pack. You will want most of your cheap nonartifact spells, as well as any color-intensive cards such as White Sun's Zenith, to be in this color. Then you can grab whatever other bombs, removal spells, and undercosted threats make their way to you.

When your early game doesn't suffer in any significant way because of the addition of an additional color, your late game improves dramatically, so you have a pretty clear decision on your hands. If you draft a deck with a strong early game and a very real late-game plan, then you are going to be able to pick up quite a few wins, even against decks that contain much stronger collections of individual cards. 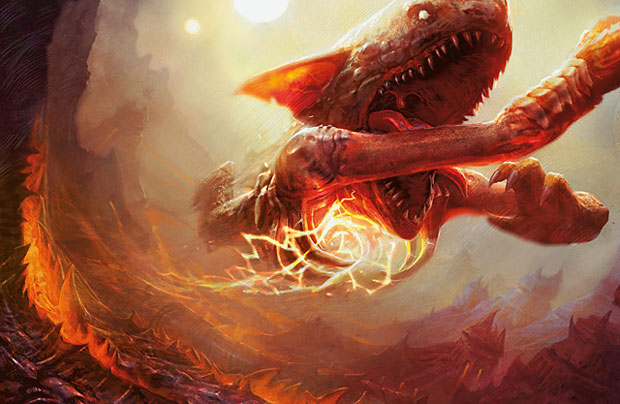 While I definitely had to scrape the bottom of the barrel a little bit with the three-color beatdown deck that I drafted last weekend, I had a very clear plan, some strong cards, and some very strong ways to close out the game (for my deck). No, Concussive Bolt isn't very good in most decks – but it's a pretty excellent finisher when you have an artifact heavy deck with a very low curve that also happens to sport an Artillerize and a Necrogen Censer.

Given what cards made their way through me, I shudder to think about what would have happened had I tried to draft a slower, more controlling, deck. At least in the deck that I wound up playing, I had good uses for my "bad" cards.

To sum things up: