The Changing Face of Innistrad Limited

ver the course of a format's lifespan, cards will change in value dramatically. This happens for every Limited format, and it's one of the things that makes drafting so much fun (for me, at least).

Why does this happen? Aren't there millions of Magic players around the world thinking about the game constantly who can (collectively) solve a format's intricacies in the time between when they play in the Prerelease and the Release weekend the following week?

While, yes, there are countless Magic players thinking about the game around the clock, Magic isn't so simple that players can universally solve a Limited format just by thinking about it—or even after months of drafting it.

Magic is a wonderfully complex game that evolves over time as people begin to learn, and appreciate, what they can do with various combinations of cards.

If mid-range control decks—those that prey on the format's quickest decks—are thought to be the most powerful strategies in a hypothetical limited format, then aggressive decks will be poor options. But if the format shifts, and players begin gravitating toward slow, grindy control decks—with far stronger late-game plans than the mid-range decks that were previously dominant—then suddenly those aggressive decks (which couldn't win in a mid-range-dominated format) become great options.

In addition to metagame shifts that occur as players develop a more complex appreciation for the format, players will often discover powerful strategies (such as the Blue-Green Mill Yourself deck that I wrote about here) that weren't even considered a possibility until months after a set's release. These new archetypes force players to look at cards in an entirely different way. So while Dream Twist and Gnaw to the Bone were once considered unplayable cards they are now invaluable pieces for one of the best decks in the format.

Sure, Brimstone Volley is still an easy first pick, as is Bloodline Keeper—and you won't see many people passing Garruk Relentless. But there are plenty of cards, like Silent Departure, which have gone way up in value—and just as many cards, like Corpse Lunge, which have plummeted—over the past couple of months.

Ready to take a look at some of the Innistrad cards that have undergone the biggest changes in value? Then read on!

Many months ago, I was given the task of writing the preview article for an innocuous-looking bounce spell called Silent Departure.

I had a lot of trouble writing that preview article. 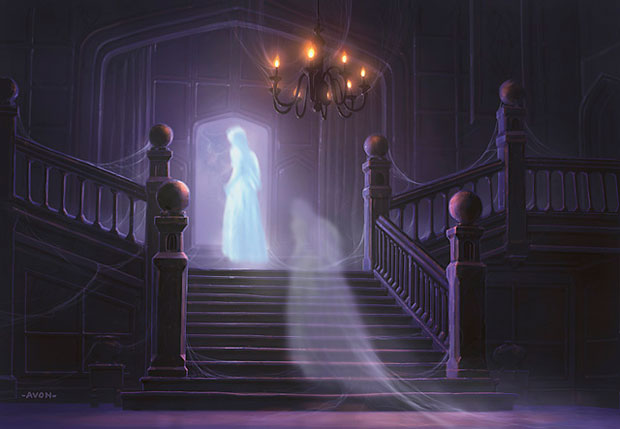 Out of context, I could never imagine how good the card would ultimately become. All I saw was a solid role player that would shine in tempo-oriented decks or controlling decks that had access to a ton of card advantage, and as a way to punish players for relying too heavily on auras or expensive bombs.

When the rest of the set was revealed, and I saw how many good self-mill cards were out there, I knew the card was going to have more applications than I had initially anticipated. But it still didn't seem great.

Even after the set hit stores, and people began drafting Innistrad with a vengeance, it took a while for people (myself included) to realize just how good Silent Departure is.

Slowly but surely, the card began climbing up peoples' pick order to the point where six-time Limited Grand Prix Top 8 competitor Gerry Thompson confidently referred to Silent Departure as the best common in the set (surpassing even the obviously excellent Brimstone Volley).

Would Silent Departure be a top common in every set?

If you slotted Silent Departure into a slower, grindier set like Magic 2011, it would often end up rotting away in players' sideboards.

Silent Departure is still, at its heart, a tempo card—and there are situations where I would leave one in the sideboard of a controlling Sealed deck. But in a format full of self-mill, Stitched Drake, auras, Travel Preparations, Werewolves (that players take a whole turn off to transform), and Delver of Secrets—that incentivize you to fill your deck with instants and sorceries—it's an incredible piece in almost any draft deck. 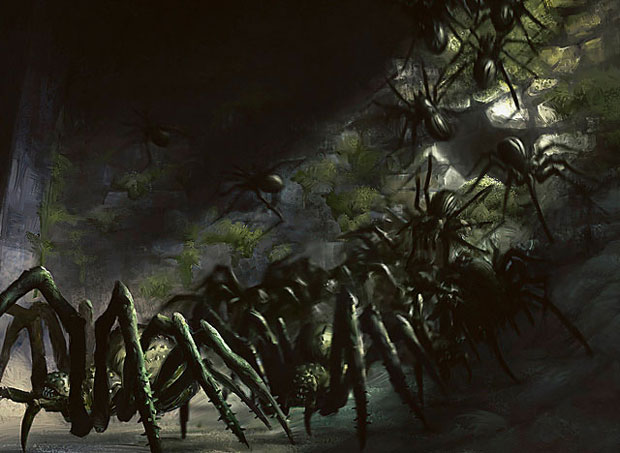 Gnaw to the Bone, and the rest of the pieces for the Blue-Green Mill Yourself deck, have risen in value dramatically since the release of Innistrad.

Dream Twist was an invisible card to most drafters during the early days of Innistrad limited. Now I'll first pick it without batting an eye.

Similarly, Mulch went from being a mediocre card that you might play if you really wanted to fill your graveyard or needed to fix your mana to being the "best green common in the set" (at least according to Blue-Green enthusiasts).

Why are these cards so good?

Because they are essential pieces for a powerful deck that relies on the cumulative effect of many cards—if you only have two ways to mill yourself, your Spider Spawnings and your Gnaw to the Bones won't be very good at all.

But if you have 3 Dream Twist, 3 Mulch, a Deranged Assistant, an Armored Skaab, and a Forbidden Alchemy—then you'll be gaining 12+ life with your Gnaw to the Bone (which you didn't even need to draw), and locking down the board with a half dozen spiders before you know it. 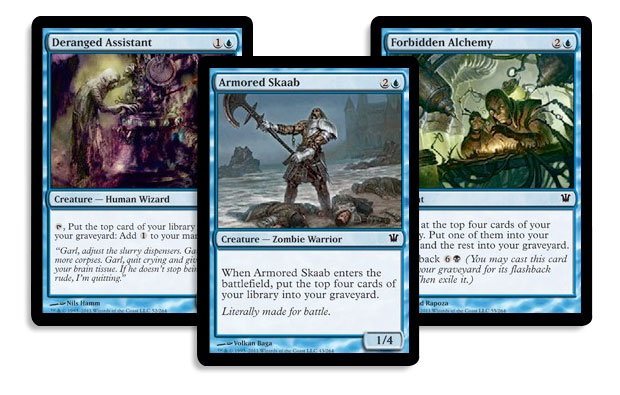 And even if you aren't working toward a big Spider Spawning, or setting up "The Loop" with a Memory's Journey, and a Runic Repetition (where you get to do things like repeatedly gain a ton of life with a Gnaw to the Bone while decking your opponent with a Dream Twist)—Mulches and Dream Twists are still great ways to power up your Delver of Secrets, Boneyard Wurms, and Stitched Drakes. 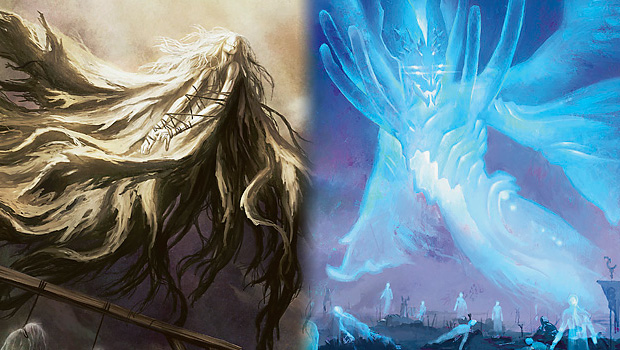 I would see five-mana 3/3 fliers like Gallows Warden and Battleground Geist go as early as second or third pick during the early days of Innistrad Booster Drafts. Nowadays, these 3/3 fliers are easily obtainable filler cards that tend to go 6th–9th, and will often end up in someone's sideboard.

Because players can build really powerful, synergistic decks in this format that are capable of doing far better things with five mana than just deploying a 3/3 flier.

When players are focused on building hyper-aggressive decks that quickly close the game out with a Travel Preparations, Self-Mill decks that can cast the perfect spell every turn (by turn six or seven), and aggressive red decks full of cheap 3-power creatures that are backed up by removal spells or bounce spells, a five-mana 3/3 flier just isn't all that impressive.

On the other end of the spectrum, Avacyn's Pilgrim has shot up in value as players have come to realized just how efficient they need to make their decks if they want them to win. 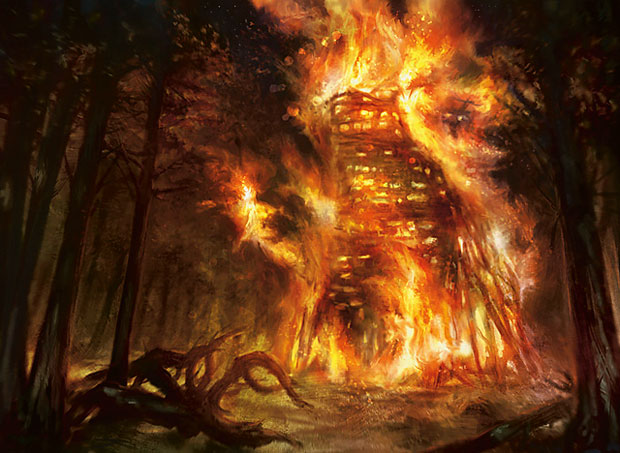 I remember when players would happily first-pick Harvest Pyre over cards like Dead Weight, Silent Departure, and Geistflame (all of which we now know tend to be significantly better than the graveyard-dependent red instant).

Sure, there were pockets of people who (what would ultimately prove to be correctly) chose to jump on every non-conditional spot removal spell they could get their hands on. And there were, and still are, Blue-Red Mill Yourself decks that make great use of Harvest Pyre (and will consequently first-pick it over just about anything). But it just doesn't shine in most aggressive decks (which are looking to press an early advantage) or in controlling decks (that are looking for ways to survive the early onslaught).

But even if Harvest Pyre has dipped somewhat in value, it's nothing compared to the many-story plummet that Corpse Lunge has undergone. At first, I thought Corpse Lunge was a high-quality conditional removal spell worth taking third or fourth pick. Now it makes the cut in about 33% of the decks I draft it in (and even that number is generous).

Corpse Lunge is just way too conditional of a card to warrant inclusion in most decks.

Meanwhile, Geistflame has revealed itself to be one of the best commons in the set. Not only is it a great way to gain extra equity when you're milling yourself, but it's an excellent card to draw naturally. There are few cards aggressive decks hate to see more than Geistflame—and even intricate blue decks will be disappointed to see their Delver of Secretsand their Civilized Scholar die at the hands of a single copy of Geistflame.

The fact is, Innistrad limited isn't about 5/5 Festerhide Boars trying to race Battleground Geists and Chapel Geists. Players are rarely winning games by grinding out marginal advantages with Ghoulraisers. 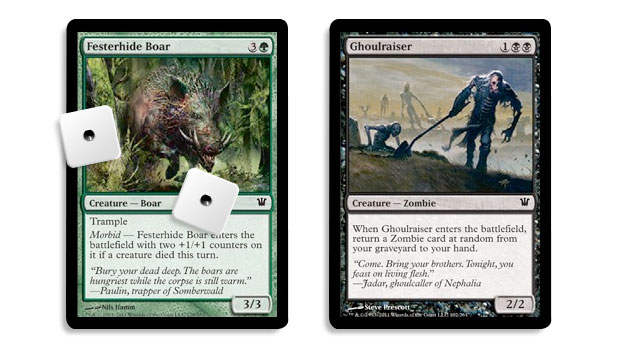 Instead, players are doing very powerful things that you might otherwise think should be reserved for constructed.

Will Dark Ascension change this? I don't know—but I do know I'm going to spend the first couple of weeks after the set's release trying to draft the most powerful decks that I possibly can.

Maybe it will turn out that grindy control decks that ultimately win with an uncontested 3/3 flier are great in Dark Ascension/Innistrad Limited—and maybe Self-Mill decks will become obsolete as the format becomes dominated by tempo-oriented decks full of cheap creatures backed up by good answers.

Only time will tell...

Join us next week as we begin previewing Dark Ascension here on DailyMTG.com!