irst, we get Gatecrash handed to us in what felt like overnight. Then, we finally get our hands on it. This is the part of the season we all revel in. To say it feels like the Christmas/Holiday Season doesn't even hold up; I, for one, have never received 249 gifts all at once.

As exciting as this is, it can be daunting. Where do we even start? How are we supposed to figure out all of the nuances of this complex new format?

The answer is simple: We aren't. Well, not yet anyhow.

These are the Days...

It takes time and practical experience to put the pieces together. This is just the reality of systems this complex.

It's also the fun part, and it's what I love most about Limited. We get to see the story of this format unfold in front of us. We get to discover hidden gems, unlock crazy draft archetypes, and—ultimately—master the format.

What are the first steps toward this goal? Here are some of the initial items I look at once we have a full set in front of us.

Get to the Meat

The first thing Limited enthusiasts should always look at are the commons and uncommons in the new set. It can be tempting to focus on the rares and mythic rares. Cards like Gideon, Champion of Justice and Duskmantle Seer draw a lot of attention—and rightfully so—but for our purposes, they aren't as important. Rares and mythic rares will have a heavy influence on the games they are cast in, but they aren't what will dictate the format from a wider perspective. 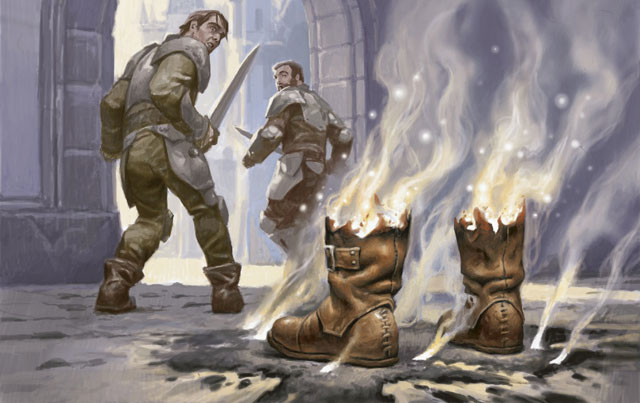 No, that responsibility falls on our friends, the commons and uncommons.

I have often found myself at the Prerelease reading the rares and mythic rares in my pool, simply because I had spent my study time on commons and uncommons.

Now that we have our sights set on the meat of the set, the initial target should be the removal. Removal—spells that kill or otherwise neutralize creatures—is the main dictating factor for the direction of a new set. Removal is important because it determines what we can get away with and which creatures will survive the threats they face the most often.

In Return to Ravnica, for example, the removal suite was largely unimpressive. A trio of six-mana spells combined with little in the way of cheap, instant-speed removal meant that Auras became a powerful strategy.

How does the removal in Gatecrash stack up? Let's dig in and find out. While we won't cover every removal spell, let's start with the common, instant-speed options.

Grisly Spectacle. Right off the bat we have a solid removal spell. While not aggressively costed, this spell is important in that it's essentially unconditional. Since artifacts aren't a strong subtheme in Gatecrash, that clause is not a big deal. But killing anything at instant speed is. This is a strong start for the removal of Gatecrash.

Massive Raid. Another color-intensive, instant-speed, yet still-effective removal spell. This one is more conditional, of course, as you won't always have the requisite number of creatures on the battlefield. Still, it's often going to be a potent removal spell for your opponent's early threats. Both Gruul and Boros would like to have multiple creatures on the battlefield, so I don't see a problem getting this for 3 or 4 damage during the course of a game.

Smite is a spell that can be difficult to figure out. At first glance it looks sweet: one mana for a removal spell is a great start. Instant speed? Sweet. After you put the pieces together, however, it slips a bit. Smite demands that you have a blocker—there will be situations where you simply don't have a creature to block with. Thankfully, this is relatively rare in most Limited formats. Overall, Smite ends up being a reasonable—if unexciting—removal spell.

Executioner's Swing is interesting. I think it looks better than it actually is. Although -5-5 is a big hit, we had Avenging Arrow in Return to Ravnica and it barely saw play. Avenging Arrow costs one more mana, but without the color restriction. I predict we will begrudgingly run this card but wish we had a better removal spell available. This is the kind of card you are happy you have once someone encodes a creature with a cipher card.

Pit Fight seems awesome. Making Prey Upon an instant at the cost of just one colorless mana is a bargain. It's easy to cast and playable in multiple color combinations as well, thanks to hybrid mana. Given the sheer size of the creatures in Gruul (and Simic, for that matter), I expect Pit Fight to be a high pick and to see plenty of play. The fact that you need a creature of some size on the table is a downside, but giving green access to instant-speed removal has to come at some cost. This is a small one to pay as it plays directly into both Gruul's and Simic's strategy of making big creatures.

Already a much-improved arsenal of weaponry from which to work, it looks like the days of the creature Aura may be numbered here in Gatecrash. Instant speed is particularly important in Gatecrash. Two of the guilds have core mechanics that fear instant-speed removal: Gruul and Dimir.

Gruul's bloodrush mechanic can only be activated during combat, rendering your sorcery-speed removal ineffective. Instant-speed removal, however, can be a true two-for-one if our opponent gets an itchy trigger finger with bloodrush.

The Dimir have cipher. They will get that first effect from casting the spell, but if we have a nice instant-speed removal spell to take care of the encoded creature before it hits us, we can prevent that critical first cipher activation. This is often the line between being worth a card and not for our opponent. 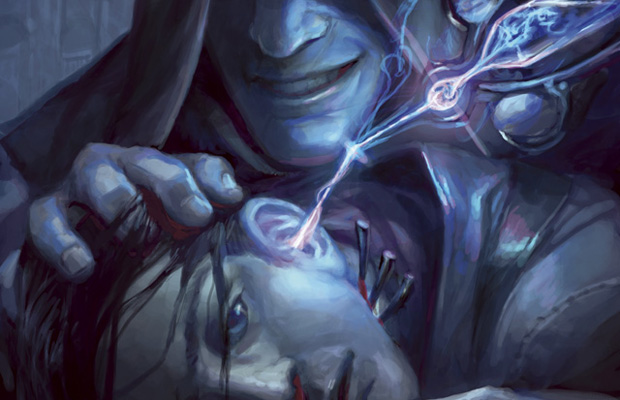 There are still some interesting pieces of removal left.

Mugging. This looks a lot like Shock, and it is. Being a sorcery changes the way the card is used. Mugging is a really interesting card in that is it somewhat modular. One complaint about cards like this is that they lose utility as the game goes longer. Mugging gets around that nicely by being a small Falter effect for the times when it can't outright kill a creature. Given the low price, Mugging will see a lot of play. Killing that evolve creature before it starts growing can keep Simic at bay.

Angelic Edict. A functional reprint of Iona's Judgment, this is a classic removal type: Clunky but worth it. Being a sorcery and five mana means you aren't getting too many blowouts with this card. You will sometimes pay more for it than your opponent paid for his or her creature. Still, having an answer in hand that just doesn't care if the creature is a 15/15 or a 2/2 Guildmage is a boon. The enchantment clause just adds to the utility. You will typically not want too many of these in a deck, but the first is always welcome. 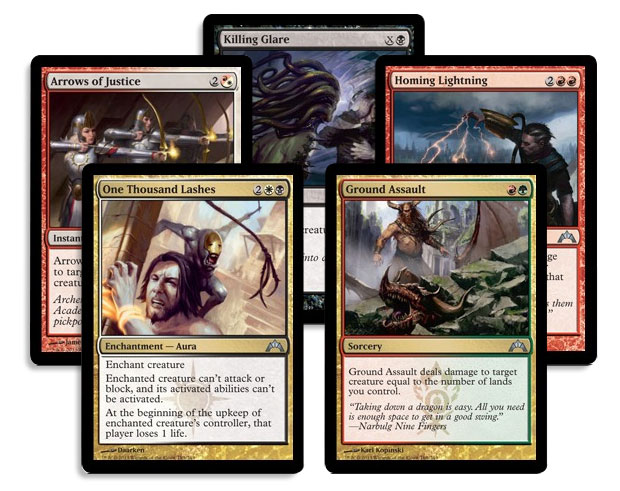 The uncommon removal in Gatecrash looks very solid as well. While not quite Doom Blade-level removal, Killing Glare and Ground Assault are both potent tools to (eventually) kill off whatever you need to.

Homing Lightning is a solid 4-damage burn spell for creatures, with the potential to be a two-for-one or better in the right spot. Any time I can get a reliable one-for-one with upside for four mana, I am apt to take it.

One Thousand Lashes is an excellent removal spell, and one of my favorites from this set. Neutralizing a creature is awesome, and grinding out 1 life at a time from its owner is pure joy. I dream of one day drafting a theme deck based on this card. I want to win a game only through life loss from this and from extort. Perhaps I'm ambitious, but this card stands as an excellent inclusion in any deck that can support it.

Even though we didn't examine every piece of removal in the set, I think we are getting a reasonable picture of the landscape. The removal options are much improved from Return to Ravnica. We aren't talking core-set level removal, however. You won't see any Lightning Bolts, Doom Blades, or Pacifisms here.

It felt like we often had to pay six mana for a removal spell before, and now it feels like that number is closer to four. That's a massive difference, and we will feel it in our games.

Let's have a quick look at some of the cards we will be pointing all this removal at. I have noticed a trend of "power uncommons" in recent sets. With cards like these, who needs rares? 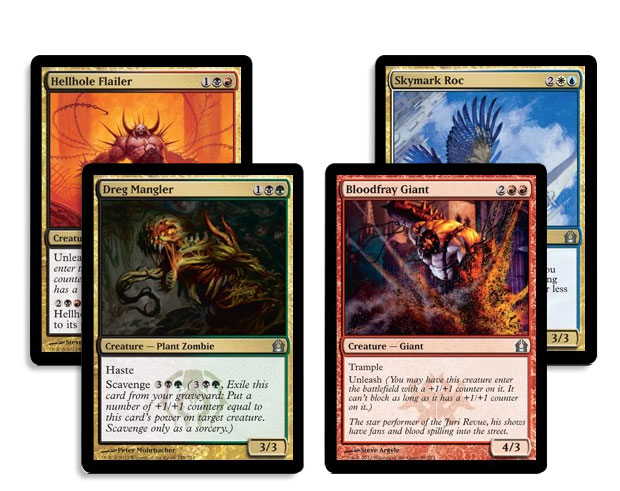 Gatecrash has some sweet power uncommons too.

Guardian of the Gateless. It wasn't long ago that a card like this would pass at the rare slot. A 3/3 with flying for five mana is reasonable. Adding the ability to block multiple creatures is a bonus. Rewarding you for doing so can make this thing just a pain to deal with for your opponent. While not the best card in the set, you are getting your five mana's worth from this one.

Dinrova Horror. Perhaps the card I am most excited about from Gatecrash, Dinrova Horror is just one big six-mana chunk of value. Rarely have our opponents had to think this hard about when to play that last land from their hands. I have always been fond of creatures that bounced things when they entered the battlefield. This one bounces any permanent; not just creatures. This won't come up too often, but the flexibility is appreciated. The fact that your opponent has to discard as well is just icing on an already awesome cake.

Ghor-Clan Rampager. Who ordered the beef? Goodness, this guy brings a lot of mass to any deck. A 4/4 for four mana is great. The bloodrush ability on this card is fantastic, granting not only a massive power and toughness boost, but also a form of evasion with trample. For cheap! Incredible. This guy will often be the recipient of some well-timed removal, whether he is on the battlefield or being rushed into battle via bloodrush.

And remember, this is just a peek at the power uncommons, as we didn't even mention the Guildmages in this discussion.

Kill or be Killed

With so many powerful cards running around Gatecrash, it's nice to know the removal is able to match them. As the format starts to show its true colors, we'll keep a close eye on which spells are seeing the most play and which don't match up well enough. Constant adjustments will need to be made as we get more and more information.

Remember, this is the fun part.

I hope everyone's release events are as awesome as mine will be!