his past weekend, I played in the Return to Ravnica Prerelease at the Compleat Strategist in Manhattan and I had an absolute blast. I saw friends who I haven't seen since the Magic 2013 Prerelease this summer, I had to make a lot of difficult (and interesting) choices when I was building my deck, and almost every game I played was close. To top it all off, I won six packs, so now I can draft twice this week.

Hopefully, those drafts will be enough to hold me over until I'm able to pick up the boxes I preordered for this weekend... 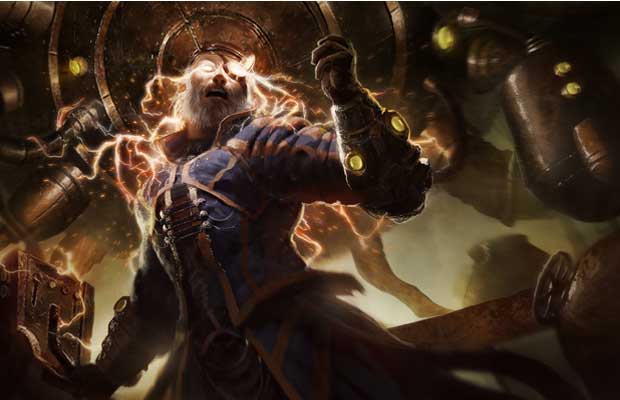 Long before I could look at the complete set list at the Return To Ravnica Card Image Gallery, I knew I wanted to play Izzet at the Prerelease. So when I called ahead to reserve my spot, I made sure they set aside an Izzet Guild Pack* for me.

Heck, even when blue-red isn't considered a viable option by most players, I'll look for ways to make the color combination work. For example, in Avacyn Restored, my favorite deck to draft was an aggressive blue-red deck that looked to get quick kills with Wingcrafter and Kruin Striker.

So when I sat down to open up my pool, the first thing I did was rip open my Guild Prerelease Pack.

With only one pack out of the way, I already had thirteen good blue and/or red cards to work with. Surely I would find the pieces that I needed to fill out my Izzet deck in my five remaining packs... 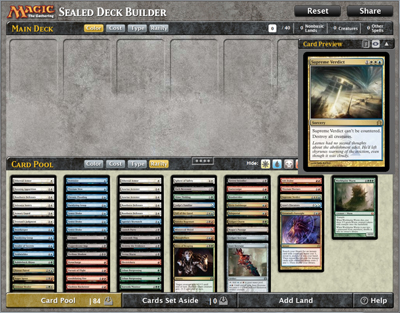 See what you would do with Steve’s Return to Ravnica sealed pool, use our sealed deck building tool and share on the forums!

When you're parsing through your Sealed pool, it's important to keep an open mind about what you're going to play—even at an event like the Return to Ravnica Prerelease, where each player opened up a Guild Pack to go with his or her five regular booster packs.

A strong preference for a specific color combination or deck type can serve you well when you're drafting, since you have a good deal of control over what cards will ultimately end up in your deck. However, the same can't (usually) be said for Sealed play.

It's in your best interest to wait until you've opened up the six packs you will use to build your sealed deck to decide what colors you want to play.

So even though I love playing Izzet, and I had a Guild Pack full of good blue and red cards to help me on my way, I ultimately wound up playing a base-green deck at the Prerelease.

I didn't want to play a base-green deck. I really didn't. If I had a desire to play green, I would have asked for a Golgari Guild Pack or a Selesnya Guild Pack. But when I opened up my Sealed pool, I found a treasure trove full of green mana fixing—and a bunch of strong cards in all five colors.

So who was I to refuse?

Sealed decks are generally slower than Draft decks. Sure, you'll occasionally find a good beatdown deck in Sealed—but for the most part, Sealed Deck games tend to last several turns longer than Booster Draft games in the same format.

Because Sealed Deck games tend to go long, players will have more time to draw and cast their best cards. Consequently, it is crucial for you to play as many answers (and bombs) as you possibly can.

So while you don't want to ignore your mana curve entirely (if you do, you're just going to get killed by whatever cheap creatures your opponent has), it's more reasonable to give up time to fix your mana with cards like Transguild Promenade—particularly if that means you will be able to stock your deck with more bombs and more answers for your opponent's best cards.

If I had been constructing a draft deck instead of a sealed deck this past Saturday, I probably would have left my Grove of the Guardian, my Arrest, an Explosive Impact, and at least one of my Transguild Promenades in my sideboard in favor of slightly better mana and another couple of cheap spells.

Yes, I still would have sideboarded in the white and my third Explosive Impact if I thought my opponent's deck was slow enough (and bomb heavy enough) to justify giving up a bit of time to deal with his or her best cards—but I suspect I would have stuck to playing "only" four colors against most Booster Draft foes.

How Much Mana Fixing Do You Have?

If you don't have enough mana fixing, you can get yourself into a lot of trouble if you try to play a three-, four-, or even five-color deck. However, if you have enough Gates, Transguild Promenades, and Gatecreeper Vines, every powerful spell you see could find a home in your deck.

You can splash a single high-quality card like an Arrest, an Explosive Impact, or a Hypersonic Dragon with as few as two or three ways to produce the required color of mana.

However, if you want to play three or four cards in your splash color (or you're trying to splash a card that requires multiple colored mana like an Armada Wurm), then you're going to want to include four, five, or more ways to make the required color of mana.

Make Sure Your Cards Pull Their Weight

When I was building my deck, I thought that Viashino Racketeer would be a great fit. I had two Gatecreeper Vines and a bunch of expensive spells, so I would be able discard excess lands or prohibitively costed spells as I searched for cards that I actually needed.

However, my deck was so mana hungry and color intensive that I could only afford to discard lands to Viashino Racketeer once I got deep into the game.

Yes, I could still use my Viashino Racketeer to help me dig for lands early in the game—but a creature with a more substantial body than a 2/1 would have been just as (if not more) effective at buying me time to draw out of my mana problems.

I still think Viashino Racketeer is a decent option in some decks, particularly if you have a fairly low curve, but unless the 2/1 body is going to have a noticeable impact on the game, you're going to want to look for something better.

For example, I wound up sideboarding out my Viashino Racketeers in exchange for two copies of Concordia Pegasus every time I played against a deck with 2-power fliers.

What Did You Play at the Prerelease?

Did you play in a Prerelease last weekend? If so, I'd love to know what kind of a deck you built.

Did you stick with your guild? Did you play a five-color deck? Did you abandon your guild entirely?

Head on over to the forums to let me know!