Posted in Limited Information on August 4, 2009

t's Johnny Week, and Johnny is all about combos, so you might think that this theme doesn't apply to Limited Information. But in Limited, just like anywhere else, you can put two cards together for added value. Limited combos, like Constructed combos, are often at their best when they are composed of two cards that are good on their own.

Two very good cards, when put together, will usually have a very big impact on the game. For example, if you had a Cudgel Troll and a Royal Assassin, you'd probably be in pretty good shape, even though they don't interact in any special way.

Having a Royal Assassin already in your pile of drafted cards might cause you to take a Blinding Mage over something comparable like Pacifism (I should mention that I will often take Blinding Mage over Pacifism even without a Royal Assassin in my deck), but you still aren't going to take it over something significantly more powerful than the tapper, such as Captain of the Watch or Planar Cleansing.

Because both cards are so good it isn't really going to change the way you draft. But there are certain types of combos that you really need to think about when you are picking your 42 cards.

If you have the potential to put together a game-winning combo, you should probably try your best to do so. But if it's very fragile, then you'd better have a good way of protecting it, or be able to put it together very consistently before you sacrifice too much to put together the pieces.

In Shadowmoor / Eventide Limited, if you have a Devoted Druid and a Quillspike, you are going to have a billionty/billionty creature. This could either chomp one of your opponent's creatures every turn until they are dead, or get flung at your opponent's face with a Rite of Consumption to immediately end the game. 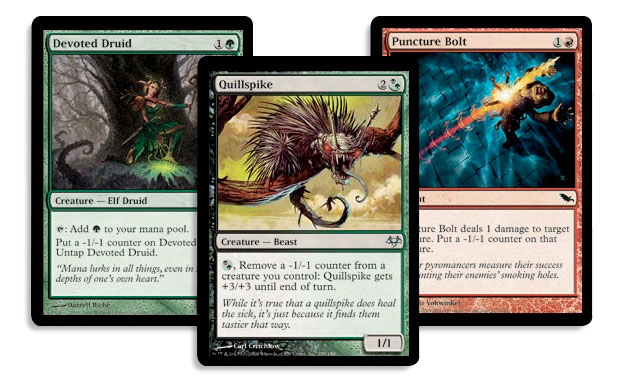 Devoted Druids are pretty good on their own, so if you are drafting green you could easily have one, two, or even three of them in a draft. So when Eventide rolls around, if you managed to pick up a couple of Devoted Druids, you should be ready to jump on any Quillspikes you see.

Sure, you might still play the Quillspike if you pick it up late, but with only one Devoted Druid to combo with there's no way that you should pick up an extremely situational combo piece—which can be stopped by even the lowliest removal spells such as Scar or a Puncture Bolt—in favor of a consistently solid creature or removal spell.

If you have two Devoted Druids, then that's a completely different story. Instead of needing things to align perfectly for your combo to smash your opponent, you have some wiggle room. Unless I had a couple of persist creatures to go with the Devoted Druids I still might be a little hesitant to take Quillspike over a top notch removal spell or a bomb, but I might go for it anyway depending on how the rest of my deck looked.

For example, if I felt my deck was quite poor, I would take the Quillspike in a heartbeat, as it would singlehandedly raise my chances of winning any given game more than anything but the flashiest bombs would. But if my deck was a slow, grinding control deck that was lacking in good creatures, and I knew that my opponent could easily save his or her removal spells to break up my combo, then I would probably take a good removal spell if it was available.

That said, if my deck had three Devoted Druids, then I would take Quillspike over everything except for the flashiest bombs, and even then I might be tempted to take the potentially infinite-powered three-drop.

Some combinations of cards allow you to win otherwise drawn-out games. For example, if you have an Alluring Siren and an Inferno Elemental in a drawn-out board, you are going to gradually work your way through your opponent's forces until you have a favorable enough board position to start attacking.

The Inferno Elemental is pretty good on its own, but the Alluring Siren is generally only good if you have some high-toughness creatures that can block and survive in combat against your opponent's soon-to-be-forced attackers.

If you see that your deck has a lot of ways to stall out, but doesn't have many ways to break through for damage and actually win, then you should be looking to pick up cards like Alluring Siren or Whispersilk Cloak higher than you might normally so that you will actually have a way to kill your opponent. If you can put together an actual combo, such as Nemesis of Reason plus Finest Hour in Shards of Alara block draft, then you are going to have a pretty good endgame to work towards, but if you don't have anything that great, then you are often going to need things like an Alluring Siren to go with your Inferno Elemental so you can eventually knock your opponent down to 0 life.

It's a bit of a stretch to call Alluring Siren plus Inferno Elemental a combo. Sure, the two cards work well together, but having the two of them won't make you a significant favorite in most games. These cards work well together, but so do a lot of other cards. You can call them a "combo" if you want, but it makes a lot of sense to reserve the term for cards that get significantly better when they are paired with their other half.

In my opinion, it's much more reasonable to call Fiery Hellhound plus Whispersilk Cloak a combo than it is to call Alluring Siren plus Inferno Elemental a combo, even if the blue two-drop and the red six-drop have just physically taken over a game for you.

In the event where you are chomping your opponent's creatures with Inferno Elemental, your Alluring Siren is simply doing what it is supposed to do. But if your Fiery Hellhound is bashing your opponent for 6-7 points of unblockable damage, both your Hellhound and your Whispersilk Cloak are working to the best of their abilities.

I was doing some Odyssey / Torment / Judgment drafts on Magic Online the other week, and in one of them I was fortunate enough to get an Animal Boneyard to go with a Chamber of Manipulation.

Neither of these cards are generally worth playing on their own, though the Chamber of Manipulation comes close, but together they are absolutely devastating. Each and every turn you get to steal a creature (which you can use to block), then sacrifice it to gain a bunch of life. This is a pretty tough thing to come back from in any game that's even remotely close.

But both of these cards are uncommons, and neither of them is really worth playing on its own. As a result, a lot of things have to go right for you to get this combo.

It's hard to take one of these cards early if you are merely hoping to see the other part of the combo. If you open up a pack that has a Chamber of Manipulation and an Animal Boneyard, then you can take the Chamber of Manipulation confident that the Animal Boneyard will make its way back to you. But barring a situation where both of these cards are in the same pack, the only way that you can give yourself a decent chance of assembling the combo is if you see one of the pieces in one of the first few packs, then pick up the other piece a few picks on.

When you have something like a Wild Mongrel and an Arrogant Wurm, a Blinding Mage and a Royal Assassin, or a Quillspike and a Devoted Druid, it doesn't really matter what your other 21 cards are. Your combo is going to be good for you.

But if you have something like Chamber of Manipulation plus Animal Boneyard, you are incentivized to build your deck so that it can stall the game out as much as possible to give you the time you need to put together your game-breaking combo.

In general, you can deal with combos the same way that you deal with bombs. If you have the opportunity to save an answer card to break up your opponent's combo, then you should.

You sit down to build your Sealed Deck at Grand Prix–Boston, and you are greeted with the following pool:

How do you build this?

Posted in Limited Information on August 4, 2009