Coming Back for More

the vast majority of readers, I absolutely love the period just before a new set is released. Every Magic set released these days brings new themes and mechanics and I'm always first in line to see what Wizards have cooked up for us to play with. Being focused on Limited rather than Constructed gives me a much broader perspective as there are always many more interesting Limited cards than Constructed ones and you can pretty much guarantee any new Mechanic will impact the Limited formats in a significant way.

I'd normally be clicking on this very website first thing every morning to see what new card is being shown off but this time around I'm in the rather privileged position of actually writing a preview article! As regular readers will be aware, I'm not actually a Wizards of the Coast employee so I haven't been involved in testing or developing the set at all. The perspective I'll be giving you is just like your own – that of a player. Fortunately Wizards have let me have a pretty funky card to show off today and I'm certain it's one that will be a high pick in drafts featuring Fifth Dawn.

So, enough intro, I'm sure you want to see the card so let's get straight to it: 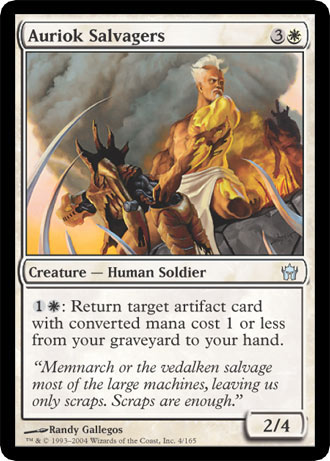 Let's check out the stats to start with. Four mana buys you a 2/4 creature. That's about par for the course but in this set it's a lot better than most. Cobalt Golem, Moriok Scavenger, Tel-Jilad Exile, Skyhunter Patrol… it seems four mana usually buys you a 2/3 when there are abilities attached. That extra point of toughness is actually fairly relevant in this format as there are numerous creatures like Vulshok Berserker, Oxidda Golem and Tel-Jilad Outrider that this card will hold off admirably. The number of common ground creatures that can break through a 2/4 unaided is pretty small. White likes creatures that defend the ground; it gives white time to win the game with its flyers.

It's also not an artifact and in white decks that's generally a good thing. Third-turn Razor Golems are very exciting but when they die to a Deconstruct or Shatter on the next turn, you always feel a little cheated somehow. The number of spells that kill a four-toughness artifact creature is much higher than the number which take out Auriok Salvagers.

Finally, let's talk about that oh-so-simple but very pretty ability. When Scott Johns sent this to me he did a very good job of anticipating what would've been my immediate reply. He included the words “Note, no tap symbol in that activation” and it's that tiny little fact that really makes this card shine.

For the few readers who are still new to Magic, the lack of a tap symbol means that this ability can be played multiple times a turn, and it doesn't require Auriok Salvagers to be untapped in order to use it.

Why is that something to get excited about? One word: Spellbombs!

The original cycle of Spellbombs in Mirrodin are the obvious companions to this card. Let's look at Pyrite Spellbomb as an example.

Combine this card with Auriok Salvagers and the Salvagers suddenly look like this:

: Return target artifact card with converted mana cost 1 or less from your graveyard to your hand.

It gets better. Say you have five mana in play and are facing a Fangren Hunter or Myr Enforcer. The Spellbomb wouldn't normally help you here but with the Salvagers it does. Cast the Spellbomb in one turn and then wait until you untap. Next turn you pay

to deal two damage using the Spellbomb, then you pay

to return it to your hand,

more to cast it, and another

to deal an extra 2 damage. That's four damage for

without it costing you a card.

That's just Pyrite Spellbomb. Aether Spellbomb will allow you to bounce an opponent's creature whenever you have the mana spare. Necrogen Spellbomb could leave your opponent never able to play a non-instant spell again! You can use the Necrogen Spellbomb's ability to make them discard during their draw step and then simply return the Spellbomb to your hand and replay it in your own turn. If you can get their hand empty they'll never have a card to use in their main phase again! No more creatures or lands for them until they've found a way to break your combo. Even a humble Chromatic Sphere lets you draw a card for three mana every turn as its ability will generate the white mana you need to pay the Salvager's activation cost.

There's also the small fact that this guy can recycle any dead Arcbound Workers, or retrieve destroyed Skullclamps or Bonesplitters that an opponent might've dealt with. That alone makes it worth a slot as white decks are often equipment dependant and having a way to get back your Bonesplitters, Scimitars and Longbows is a great addition to any white deck.

It can also combo with Welding Jar to protect any of your creatures or artifacts from opposing removal spells. An opposing Plated Slagwurm looking scary? Just chump-block with your Razor Golem every turn while regenerating it with the Welding Jar over and over.

One last thing to note is that it will also return any Artifact Lands you might've lost along the way as they have a converted mana cost of zero for the purposes of this ability. You could tap a land for mana, sacrifice it to your Atog or Krark-Clan Grunt and then use the mana to help pay for the Salvager's ability to return the land to your hand so you can replay it. There are a lot of minor abilities that this card offers and I am in no doubt that there will be even more options available to us once we see the full Fifth Dawn set.

Auriok Salvagers is going to be very good in Limited and if you're the white drafter it will definitely be worth picking up all those on and off colour Spellbombs late in a draft just on the off-chance this drops into your lap when you get round to Fifth Dawn. Salvagers is an uncommon so you won't be able to rely on it appearing but with Fifth Dawn being a smaller set it will turn up from time to time.

I can't finish up without mentioning constructed a little. I'm definitely no constructed expert but there are some obvious possibilities with this card.

In Type One there is the small matter of infinite mana when you combine the Salvagers with Black Lotus or Lion's Eye Diamond. Sacrifice the Lotus or Diamond for three mana, return it to your hand for two mana and repeat. Net gain one mana every cycle that you can eventually make any colour you like. I don't imagine four mana, 2/4 creatures get a look in when it comes to Type One but anytime Wizards produce an easy two-card infinite mana combo I think it's worth looking at.

When it comes to Standard and Block Constructed I think we'll have to wait until we see the rest of the set. I haven't seen the whole set yet either. I don't yet know what is going to be available to us once Fifth Dawn is released but I am going to defer to Mark Rosewater's article last week here. One small quote from that piece has me intrigued:

“So you have some engines and some mana producing cards. In short, you have a lot of mana. What can you do with it?”

So if Fifth Dawn does give us ways to generate a lot of mana then just look at what this card can do with it! Draw your whole deck via a Chromatic Sphere? Deal a ton of damage via a Pyrite Spellbomb? Gain loads of life via a Sunbeam Spellbomb? All of these are possible and more I am sure.

Auriok Salvagers is definitely a card you'll be seeing in Limited and I suspect it could show up in Constructed from time to time too.

That's it for now. Thanks for reading,