Posted in Limited Information on August 1, 2012

ogg Flunkies, Welkin Tern, Tormented Soul, Fog Bank, and Guardians of Akrasa are all strong cards in the right deck. But they aren't good fits in every deck. If you're playing an aggressive deck with a lot of cheap creatures, then you can make very good use of the oversized (for its cost) Mogg Flunkies. Similarly, evasion creatures like Welkin Tern and Tormented Soul are great in fast decks, particularly if you have exalted creatures or other ways to enhance them, like Rancor. 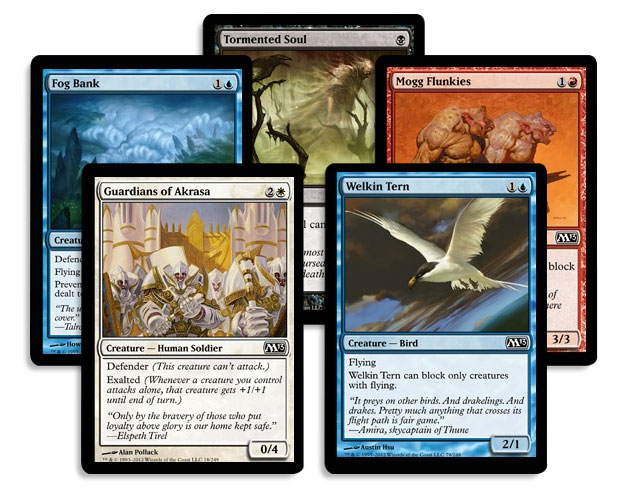 While the concept behind successful aggressive decks is generally easy to understand (if difficult to execute to their fullest potential), players often have a skewed understanding of what they need to do to construct a winning control deck.

To help with that, this week I am going to look at some of the things you need to watch out for when you're attempting to draft a control deck. 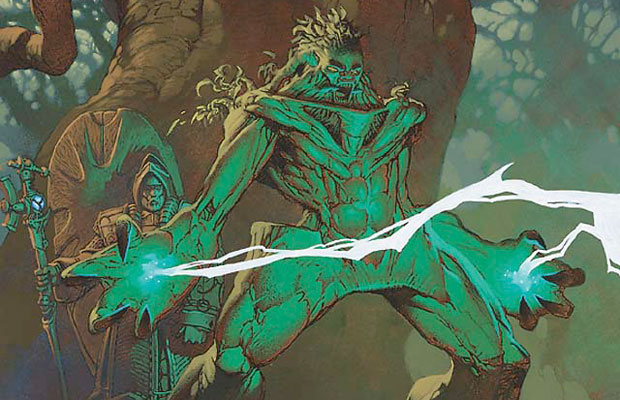 If you have answers for every threat your opponent plays coupled with ways to draw extra cards, deal with multiple creatures at one time, or some huge game-ending threats (that your opponent has no way to deal with), then you will inevitably win.

But if your opponent gets out ahead of you, and you don't have any good way to catch up, then you won't have time to take over the game.

So what does that mean for you?

Well, for starters, it means you need to have a plan to survive through the early stages of the game.

If your one-for-one answers are more expensive than your opponent's creatures, you can quickly find yourself way behind with no way to catch up.

For example, Divine Verdict doesn't work very well if you're behind. If your opponent has a bunch of creatures on the board, he or she can either allow you to Divine Verdict one of them away (content in the fact that you've invested a card and a lot of mana into dealing with one ultimately replaceable creature). Or your opponent can play around it by simply playing a creature and passing the turn, forcing you to waste a turn by leaving up that four mana for Divine Verdict.

And while Divine Verdict can be a particularly tough card to utilize effectively if your opponent gets off to a quick start, even all-purpose removal spells can be of limited usefulness if you fall behind early. If you're taking a bunch of damage early, then you're going to need to use premium removal spells like Murder and Public Execution to deal with threats that might have otherwise been negligible had you kept up with your opponent through the early stages of the game.

And if your plan is to just take hit after hit during the early turns, before playing plus-sized creatures that will neutralize your opponents' offenses, then you shouldn't be surprised when you lose because your opponents had Pacifism, Searing Spear, or Unsummon they used to press their early advantages.

Consequently, it's important to prioritize cheap spells for your attrition-based control deck (just as you would if you were drafting an aggressive deck). If you can't keep up, then you're going to be in a lot of trouble.

While it's great to say that you're going to draft a deck full of cheap, all-purpose removal spells, bombs, and cheap high-impact creatures like Vampire Nighthawk, those pieces aren't going to come together all that often.

However, it isn't all that unlikely that you will be able to stock up on Deadly Recluses, Centaur Coursers, Kraken Hatchlings, Essence Scatters, and Divinations that you can craft a very synergistic deck around. 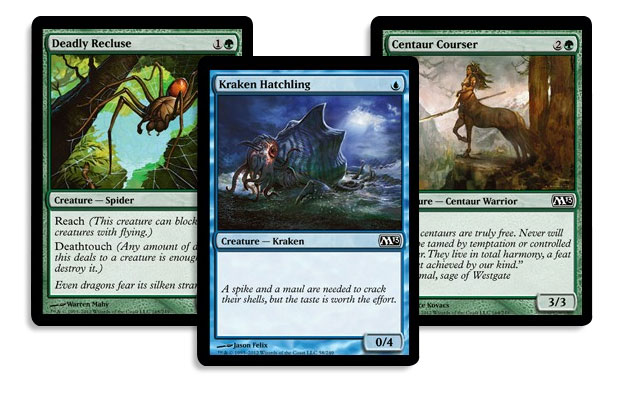 Because these cards are nowhere near as sought after as easy first picks like Murder and Vampire Nighthawk.

Of course, if you are fortunate enough to pick up a bunch of Murders and Searing Spears early, then you can build your deck around them. But if you don't get them early, you shouldn't rely on finding them later because they probably won't be there for you.

Can You Stop Your Opponent's Big Creatures? What About Fliers?

If you aren't able to kill your opponents quickly (with any degree of regularity), then you're going to need to be able to reliably answer the threats they present.

While cards with specific (but limited) applications like Negate, Rain of Blades, and Naturalize can be good additions to your deck, if you have too many conditional cards you can run into a lot of trouble if your opponent just plays a bunch of creatures your "answers" can't touch.

And even if you are good at dealing with creatures, you need to be able to deal with all sorts of different types of creatures in order for your deck to excel. That means having answers for big creatures, fast creatures, and evasion creatures.

If you don't have the ability to neutralize a wide range of threats, then you need to focus on ways to overrun or overpower your foes.

I Don't Have That Many Answers; What Do I Do?

So you set out to draft and build a control deck full of good answers. But you didn't get the answers you were looking for...

No, you don't need to throw your arms up in the air and resign yourself to defeat—you just need to figure out a new plan.

Maybe that means you need to fill up your deck with a bunch of oversized five- and six-drops and play nineteen lands so you can reliably cast them. While this might not be something you would want to plan on drafting, you will at least have a clear route to victory (which is a lot better than having no plan at all).

Or maybe you will instead end up putting together an evasion deck with Welkin Terns, Tormented Souls, and a bunch of cards like Fog Bank and Kraken Hatchling, that can help fend off your opponents long enough for you to peck them to death. 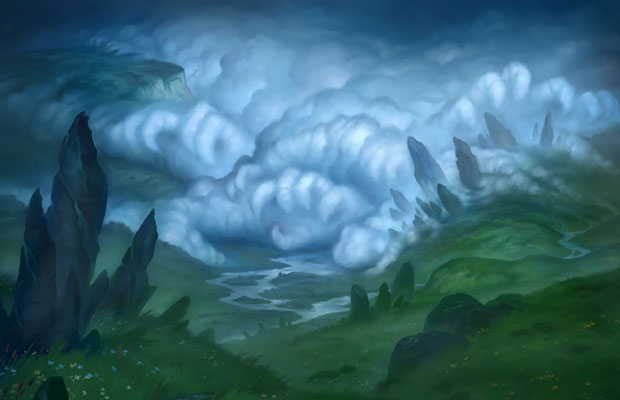 Another key to winning with grindy control decks is to minimize your opponent's opportunities to generate card advantage at your expense. Sure, Tricks of the Trade and Dark Favor can help players execute some quick kills, but if you're planning on settling in for the long game, the fact that you will lose two cards (and two turns) to an opposing removal spell any time you try to pump something up with an enchant creature makes these cards less than desirable options.

If you realize your opponent has a lot of big creatures but next to no removal spells, then it might make sense to board in the two Tormented Souls and two Dark Favors that were sitting in your sideboard. But if you try to shove those into the main deck of your control deck full of one-for-one answers, you will get yourself into a lot of trouble any time your opponent has a Searing Spear or a Pacifism to neutralize your early threat.

Okay, enough about backup plans—let's shift our focus to the elements that are necessary for a successful attrition deck.

A problem that plagues a lot of attrition decks is an inability to win games where their opponents draw more spells than they do. After all, one-for-one answers can only go so far...

If you have enough ways to generate card advantage, like Divination, Sign in Blood, Mutilate, and Magmaquake, then that should minimize the chances your opponent will out-spell you.

But if you don't have many ways to generate raw card advantage, you are going to need to have a number of high-impact cards in your deck that can take over the game for you even when your opponent draws more spells than you do.

You can accomplish this goal by playing with large creatures like Duskdale Wurm; alternative victory conditions like Sands of Delirium, which can win you games even if you're lagging behind in a lot of areas; or gamebreaking (but expensive) spells like Diabolic Revelation that you can use to close out otherwise close games. 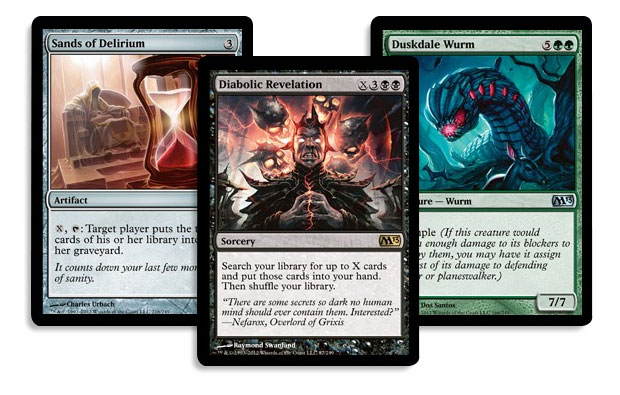 If you're playing against a control deck that seems to have answers for everything you play, then you're going to have to pay close attention to the weaknesses it has when you're sideboarding.

If your opponent played a lot of good ground creatures but not many fliers, then a card like Kitesail (which you might have otherwise shied away from due to its cost) might be enough for you to fly to victory.

If your opponent seemed particularly adept at dealing with cheap creatures, then you might want to sideboard into a slower but bigger deck full of cards like Vastwood Gorger, so you can overpower your foe.

And if your opponent's deck seemed slow, then you might need to board out your expensive (but powerful) spells in favor of quick threats like Torch Fiend.

Just because you got thrashed in the first game by your opponent doesn't mean the next two games need to go the same way...

Posted in Limited Information on August 1, 2012