he experience that you get from playing Core Set Limited is unique in that it allows you to focus (almost exclusively) on your Magic fundamentals. Do you know how to parse through a Sealed pool? How about identifying whether or not a card is playable? Can you evaluate the worth of an opening hand based on what else is in your deck? And so on.

The skills that you develop while playing Core Set Limited are skills that you can take with you no matter what type of Magic you're playing. When you learn about racing while playing Magic 2012 Booster Draft, you'll become more proficient at piloting beatdown decks in everything from Standard to Legacy to Sealed Deck. When you spend an early pick on a Goblin Fireslinger over an ostensibly far more powerful but significantly more expensive and/or color intensive card like Consume Spirit en route to putting together an excellent bloodthirst beatdown deck, you're reinforcing the value of enablers and the importance of a good mana curve. 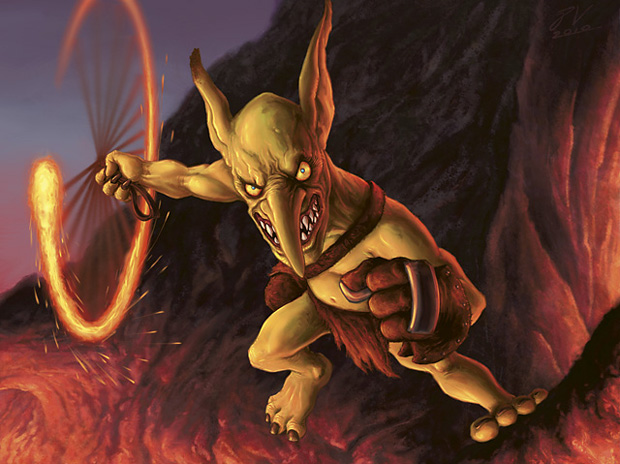 While M12 is more mechanically driven than past core sets because of bloodthirst, it's not like you're trying to poison your opponents to death, or keep your opponent from getting three artifacts on the board at any given time (to limit the effectiveness of their metalcraft cards). No, you're just playing straightforward games of Magic wherein you're going to go out of your way to avoid taking hits unnecessarily when you're playing against red and/or black decks.

Since we're getting back to basics, let's take a look at some archetypal early-game combat situations and figure out some important things to keep in mind when figuring out whether or not to block.

Azure Mage is a strictly better card than Coral Merfolk... but there are plenty of situations where I would block an attacking Coral Merfolk with my Azure Mage.

If I were to treat every Azure Mage that I ever play as a (fragile) Treasure Trove that could occasionally attack or chump block when absolutely necessary, then I would be giving up a ton of equity. By restricting the way in which you are willing to use a card "because it's good" you can make an otherwise good card into something completely unremarkable, or even something actively bad.

If you're limiting the way that you play your cards because you have pipe dreams of getting maximum value out of them, an Azure Mage could actually be functionally worse than a Coral Merfolk would be for you.

By that same notion, "bad cards" can become quite good if/when your opponent doesn't give them the proper amount of respect. 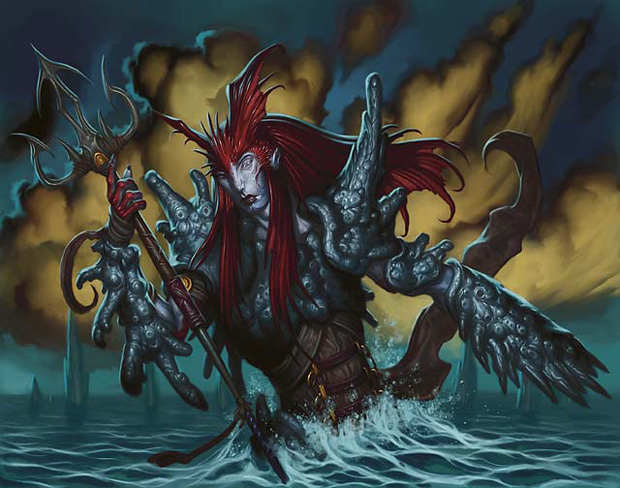 Would you play a card that costs

and deals 6 damage to target player, then 2 damage to a creature of that player's choosing? Messy templating aside, does this seem like a card that you would want to play? Of course it does! This card would be really, really good. If you had the opportunity to trade your Azure Mage for this card, you would do it in a heartbeat—particularly if you were worried about your life total.

Well, that's exactly the card that you turn Coral Merfolk into when you're too stubborn to block it with your Azure Mage (and you don't have a stockpile of strong defensive cards in your hand).

The next time that your opponent attacks in with a "bad creature" and you have the opportunity to trade your "good creature" for it, don't just automatically take the damage. Instead, take a moment to think about just how much damage you will ultimately end up taking from your opponent's "bad creature."

If you have a way to lock the board down on the next turn, then by all means take the damage. But if you're just going to take hit after hit, before ultimately making the same trade that you had the option to make a few turns ago, then you shouldn't hesitate for very long before making the trade when it is initially offered to you.

I've won countless games, particularly in Sealed, against opponents who legitimately had better decks than I did because they overvalued their cards and ultimately took a lot of extra damage as a result of their stubbornness.

The prevalence of good bloodthirst cards (and, consequently, bloodthirst-based strategies) in M12 Limited makes it even more important than usual to make those early blocks. If you let your (black and/or red) opponent get in for damage early, not only will you have less life to play with later on, but you will turn on your opponent's Blood Ogres and Gorehorn Minotaurs.

So while it's completely understandable why you would hesitate before blocking a Goblin Piker with a Stormfront Pegasus, if you don't have a good way to lock down the ground in the next couple of turns, then you shouldn't be afraid to make that block.

Even if you have a Griffin Sentinel in your hand that you're ready to cast on your very next turn, you should strongly consider blocking that incoming Goblin Piker with your Stormfront Pegasus -- particularly if you've seen a lot of strong bloodthirst in Game 1 (and/or 2).

If you take the hit, then your opponent will potentially be able to cast Blood Ogre as a 3/3. And then you'll end up taking another hit the next turn (from the Blood Ogre), allowing your opponent to make a 5/5 Gorehorn Minotaurs.

But if you instead block, your opponent will be unable to power out his or her bloodthirst creatures in this way, giving you a LOT more breathing room to work with.

Will every opponent with Mountains always have this perfect bloodthirst curve? Of course not. But if you can afford to play around the possibility at a low cost (within the context of your deck's overall game plan), then you should definitely do so.

"Why Would My Opponent Be Playing that Mediocre Card?"

Players play seemingly weak cards for a number of different reasons. If you understand these reasons and remain constantly aware of them, you will be able to make much stronger combat decisions than you would if you just guffawed every time your opponent played a "bad card."

If the card is just a non-crucial piece of filler in an otherwise reasonable deck, then you might lose out on some equity if you overvalue it. However, there will still be plenty of spots where your opponent's subpar card can actually have a large impact on the game (particularly if you don't give it any respect).

So while a Goblin Piker can help your opponent turn on all of his or her bloodthirst cards in a black-red beatdown deck (allowing it to play a fairly crucial role), a Coral Merfolk can still clobber you for a ton of damage in a white-blue beatdown deck, and if your opponent is looking to eventually beat you with a well-timed Frost Breath or two, then you're going to want to preserve your life total as much as possible. 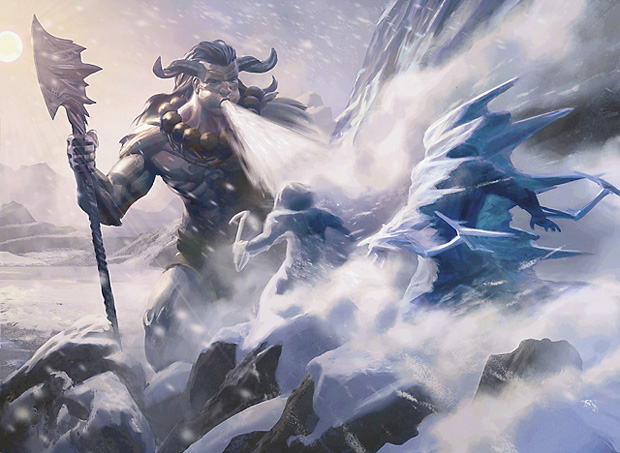 If the card is better in your opponent's deck than it would be under normal circumstances, then you are going to need to give it more respect than you might initially feel comfortable doing. If you know that your opponent has two Gorehorn Minotaurs and a Blood Ogre in his or her deck, then it's going to be in your best interest to make what would otherwise be undesirable trades in order to stop your opponent from dealing you any damage.

If you think that your deck is naturally strong during the mid to late game, then you should look to make early trades, even if it seems like doing so would be disadvantageous in the short term.

If you overvalue the cards at the bottom of your curve when you have a deck that's full of really good (but expensive) cards, then you're going to end up losing a lot of games where you were "one turn away from casting XYZ" which would have won you the game with ease.

However, if you've got a grip full of strong defensive creatures like Stonehorn Dignitary, but no good way to actually pull ahead once you've stabilized the board, then it becomes very important for you to hold onto your early utility creatures and your evasion creatures as you will be able to get a very real advantage out of them (as opposed to a hypothetical advantage that you might never actually achieve when you're getting beaten down but you have an Azure Mage that could draw you extra cards if only you had four extra mana lying around).

Just because you have a single Giant Spider in your hand doesn't mean that you have things locked up... particularly if your opponent has shown you a lot of removal or bounce.

Azure Mage is a very mana-intensive card. If you fall behind with it on the board, it's unlikely that you're going to be able to catch up while using it profitably. If your opponent is putting real pressure on you, and you don't block with your Azure Mage (either early when it would be most effective in combat, or a bit later when it could still stop the bleeding a bit) then you make your Azure Mage into an extremely fragile Treasure Trove—which just isn't anything remarkable.

Merfolk Looter, on the other hand, lets you to rip through your deck at no cost beyond the initial two-mana investment, allowing you to generate a very real card-quality advantage every turn. 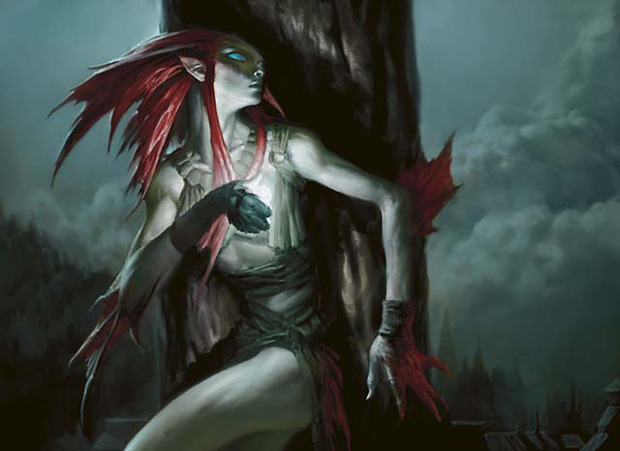 So while I will happily trade an Azure Mage for an opposing Goblin Piker if I had a somewhat slow draw, I would be very hesitant to block an opposing Goblin Piker or Coral Merfolk with my Merfolk Looter early on—especially if my deck was full of cards (namely bombs, cheap removal spells like Doom Blade and Incinerate, and tempo-oriented cards like Æther Adept) that allowed me to generate a large tempo advantage.