The Decks of Return to Ravnica, Part 2

Posted in Limited Information on October 31, 2012

Make sure to also check out Part 1.

was going to write about Azorius and Selesnya this week, but before I sat down to start typing Brian David-Marshall tipped me off to a couple of guilds he had been having a lot of success with. 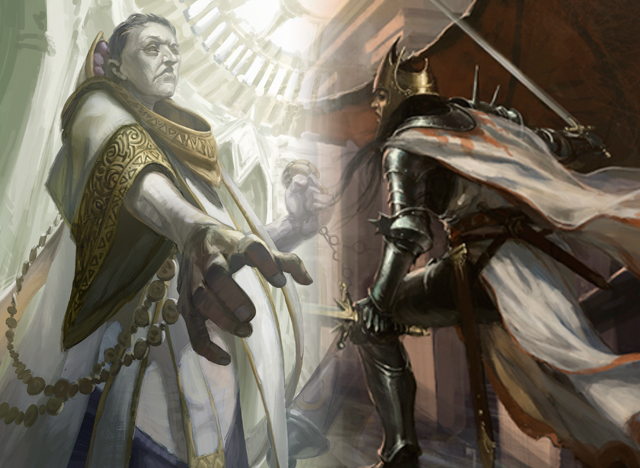 Yes, I realize there aren't any explicitly Orzhov or Boros cards in Return to Ravnica (we're going to have to wait for Gatecrash for those), but that minor detail hasn't stopped me from drafting some very powerful white-black and red-white decks.

White and red have many of the best single-colored aggressive cards in the set. And while black might not have quite as much depth as red does, cards like Stab Wound, Ultimate Price, and Deviant Glee (yes, Deviant Glee) give me some very compelling reasons to go into the color of death and decay.

While I normally shy away from creature enchantments, Ethereal Armor, Knightly Valor, Pursuit of Flight, and even Deviant Glee have all become extremely high picks for me in Return to Ravnica booster drafts.

There isn't a lot of removal or bounce to worry about in Return to Ravnica Limited. And of the removal spells that can be found, many of them are expensive (Trostani's Judgment) or ineffective against creatures with high toughness (Annihilating Fire). These conditions allow for your Auras to be extremely effective—and efficient ways to punch through damage—instead of being liabilities that will inevitably just lead to your opponent getting a two-for-one at your expense.

If you're playing Rakdos and you put a Deviant Glee on a Grim Roustabout, you have a 4/3 regenerator you can give trample to at a moment's notice. That's not easy to stop.

If you're playing Boros and you put an Ethereal Armor on a Azorius Arrester and a Pursuit of Flight on an unleashed Splatter Thug, your opponent is going to take 9 points of first strike damage a turn unless he or she has something really good to stop you with.

And while I would normally advise against the act of putting all of your eggs in one basket, if you're playing Orzhov and you put an Ethereal Armor and a Deviant Glee on your Trained Caracal on turn two, your opponent is going to need to find an answer fast if he or she is going to have any hopes of dealing with your 5-power first striking lifelinker that's attacking on turn two.

(The fact that players are capable of these kinds of aggressive starts is further reason why I don't want to play Transguild Promenade in my Draft decks.)

My default at this point is to try to draft aggressive white decks or Rakdos decks, but I'm perfectly happy to jump into Izzet if it's obviously open (I'm staying away from Golgari right now unless it becomes painfully obvious to me that I should be in black-green).

But just because I want to play decks that are loaded with Ethereal Armors and little white creatures doesn't mean that it's always going to be possible, let alone advisable, for me to do so.

My go-to strategy in pack one of most Return to Ravnica drafts is to:

1: Look for high-quality removal spells and/or bombs. If I see something like an Annihilating Fire, a Cyclonic Rift, or a Necropolis Regent, I'll probably take it.

2: If I don't see any removal or bombs, then (assuming I haven't already firmly committed to a conflicting set of colors) I'll check for top-notch uncommons like Skymark Roc, Call of the Conclave, or Hellhole Flailer.

(Note that many of the "best" uncommons in this set require two colors of mana and can consequently end up getting passed around pretty late in packs two and three. So while Call of the Conclave is one of my favorite cards to take pick one pack one because I can draft a deck around it, if I'm firmly in Azorius I will happily take a Vassal Soul, or just about any other decent on-color card, over the Centaur generator.)

3: Then I'll look for aggressive creatures or Auras that can fit nicely into a base-white deck and/or a Rakdos deck.

Later on in the draft, after I've picked up a few Ethereal Armors and/or token generators, my priorities will inevitably change.

Every time you draft an Ethereal Armor, every other Aura you see immediately goes up in value... at least until you reach a point where you have so many Auras you're in danger of not having enough creatures (you usually want a minimum of fourteen or fifteen creatures if you're playing multiple Ethereal Armors) in your deck.

Alternatively, if I'm in the third pack and Pursuit of Flight is the only Aura in my deck, then I'm going to (mostly) ignore any Ethereal Armors I see.

I draft, and play, a lot of "underpowered" creatures in Return to Ravnica Limited because they're cheap.

Rakdos Cackler, Dryad Militant, and the rare Deathrite Shaman are easy inclusions in aggressive decks that can cast them. But even one-mana creatures often regarded as unplayable, such as Bellows Lizard and Trained Caracal, actually have a great home in decks filled with Ethereal Armor, Deviant Glee, and/or Pursuit of Flight.

Bellows Lizard is a lot better than people give it credit for (I'll even play it in Izzet decks without Auras if I need some help with my curve)—particularly in decks that are able to enchant it and give it first strike. And while Trained Caracal generally isn't good enough to main deck in a deck without Ethereal Armors, I'm perfectly happy to play a cat or two if I have a bunch of Auras in my deck and I would otherwise be light on one- and two-mana creatures (I'd certainly rather play a Trained Caracal instead of a redundant five- or six-mana spell).

Sometimes you will be fortunate enough to get an abundance of good detain creatures, Voidwielders, and Dramatic Rescues, allowing you to get off to quick leads and keep your opponent's best creatures tied down for as long as it takes to kill your helpless foe.

But other times, you're going to need to lean heavily on your evasion creatures like Sunspire Griffin, Tower Drake, Faerie Impostor (which works very nicely with Azorius Arrester), and Soulsworn Spirit.

You might also be able to pick up a finisher like Blustersquall that will allow you to knock out your opponent after your opponent thinks he or she has stabilized. But if that doesn't happen, you should generally plan on getting a lot of mileage out of your fliers.

When you're drafting an aggressive Selesnya deck, your plan can be as simple as "play a bunch of aggressive creatures, win important combats with Giant Growths and Common Bonds (and/or grow my creatures to huge sizes with Ethereal Armors), and use my Sunspire Griffins to punch through those last few points of damage in the air."

However, if you're drafting a dedicated populate Selesnya deck, then you're going to need to put a bit more thought into your endgame.

Against some foes, simply being able to crank out a gigantic army of 3/3 Centaurs just won't be good enough.

If your opponent has a 4-power Grim Roustabout (that's been pumped up by Auras and/or scavenge tokens) breathing down your neck and some other reasonably large creatures sitting back on defense, your steady supply of 3/3s might just end up chump blocking.

Which is why you need to grab cards like Trostani's Judgment to deal with your opponent's best creature (and generate another Centaur to boot), Common Bond to help you win close combats and permanently grow your key creatures, and maybe even a couple of fliers you can ride to victory should the ground get completely cluttered.

And if you don't get the pieces you need in white and green to reliably close out games and/or deal with your opponent's best cards, you might need to dip into a third color.

So don't be afraid to splash for a Street Spasm and an Explosive Impact, or a Blustersquall and a Skymark Roc if you think that will help shore up some of your deck's late-game deficiencies.

If I'm drafting Azorius, Selesnya, Rakdos, Izzet, or Golgari, there are always going to be a couple of different ways I can reasonably draft my deck. Consequently, being able to figure out what my deck is actually going to do, and how I will win with it, is very important.

However, if I'm playing Orzhov or Boros, it's because I've picked up a bunch of good aggressive creatures in the correct colors, as well as some key removal spells and/or Auras I can use to support them.

And while there will still be some tough choices (such as figuring out if I'm going to get enough instants and sorceries to make Guttersnipe work or if I should just take that Traitorous Instinct that I know will be very good for me), generally, the plan is going to be to get off to a quick start and to keep my onslaught going with Auras, detain creatures, and removal spells.

Even if you have a lot of cheap, efficient, creatures in your deck, that (usually) isn't going to be enough for you. You need to know how you're going to win if your opponent has some tools to blunt your initial assault.

Dynacharge to pump up a bunch of tokens, Ethereal Armors to grow your creatures to massive sizes, Blustersquall, Teleportal, evasion creatures, massive populating, abundant removal spells, burn spells like Explosive Impact, bombs like Chaos Imps, grindy damage from cards like Guttersnipe, or well-timed detains from your two Azorius Justiciars are all perfectly good ways to plan on ending things.

But regardless of what your plan is, it's very important that you have one.

If you don't, you're going to find yourself in a lot of spots where your opponent stabilizes at 6 life, leaving you without any meaningful way to punch through for damage.

Posted in Limited Information on October 31, 2012