The Decks of Return to Ravnica, Part 3

Posted in Limited Information on November 7, 2012

Make sure to also check out Part 1 and Part 2 .

he most consistently aggressive guild in Return to Ravnica Limited is, without a doubt, Rakdos. And it's not just popular, it's good, too.

So while Rakdos decks might not be completely dominant, the fact that Rakdos is so prevalent in Return to Ravnica has forced everyone to adapt their draft strategies with respect to the archetype, lest they get burned to a crisp whenever they face it. 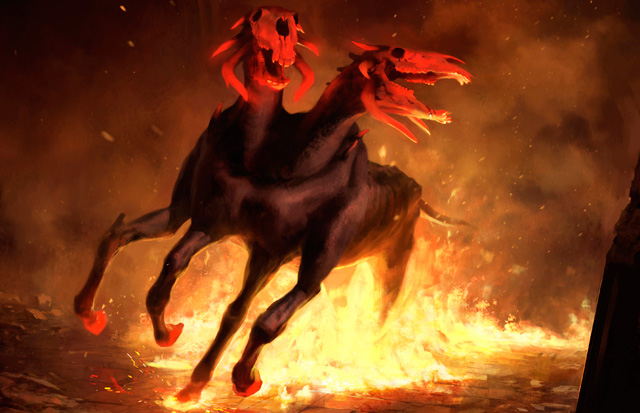 Consequently, five-color control decks that hinge on Transguild Promenades and Axebane Guardians to fix their mana are scarcely seen in the wild because they can't reliably keep up with the fastest decks in the format.

But in order to make sure that your aggressive Rakdos decks can actually punish slower opponents, while simultaneously having enough oomph to get past prepared foes, you're going to need to know what to prioritize when you're drafting.

And if you instead decide to draft a slower control deck, you're going to need to make sure that you can keep up with those lightning-fast Rakdos decks and still have enough left over to win once you get to the later stages of the game.

Assuming there aren't any extremely powerful rares like Chaos Imps that might divert your attention, your first priority when you're drafting Rakdos should be to pick up as much high-quality removal as you possibly can.

Cards like Auger Spree, Stab Wound, and Annihilating Fire should hold a spot at (or near) the top of your wish list regardless of what other cards you have.

But after that, things get a bit more nuanced.

You want to take aggressive creatures, situational removal spells, and Auras—but how do you know what you should grab?

Will your deck always be composed this way? Of course not.

But if you go through your draft with an end product in mind (and make sure you have enough two- and three-mana creatures), you'll be able to adjust your priorities on the fly as you notice what your deck still needs.

Decide Which Creatures You Want to Prioritize Early (2 vs 3)

Thrill-Kill Assassin, Rix Maadi Guildmage, and, to a slightly lesser extent, Rakdos Cackler are all good enough that I will generally take them over any common Rakdos creature (the potential exception being Daggerdrome Imp when my deck is perfectly suited for it).

But what do you do when you're looking at a pack that has a Gore-House Chainwalker and a Splatter Thug in it?

Both of these cards are clearly very good in an aggressive Rakdos deck—but while Splatter Thug is better in play, if you don't have a two-mana creature to play on turn two it will inevitably limit just how effective your early assault can be.

Personally, I've been taking two-drops in this spot. I never want to worry about whether or not I have enough cheap creatures for my deck to function properly. I think it's better to have seven two-drops and a couple of Sewer Shamblers at three mana than it is to risk not having a 2-casting-cost creature (even if I'm able to play a Dead Reveler on turn three).

I recognize that I may be on the wrong side of this debate, however.

At Grand Prix Philadelphia, Luis Scott-Vargas cruised his way into the Top 8 by prioritizing the "good three-drops," notably Splatter Thug and Dead Reveler, over two-mana creatures like Gore-House Chainwalker and Grim Roustabout.

LSV was fairly confident he would be able to fill out the early parts of his curve, and consequently decided to spend a lot of his early picks on the best three-drops.

The decision to take Splatter Thugs and Dead Revelers over Gore-House Chainwalkers early on certainly worked out well for LSV in Philadelphia, and it can work out well for you, too.

But regardless of what you decide to take early, once you get to the second or third pack, you may need to let curve considerations play a more important role in determining your priorities.

For example, if you're halfway through the second pack and you have four Splatter Thugs at your disposal but only a Rakdos Shred-Freak that you can cast on turn two, suddenly those two-drops should probably jump up in value for you even over the highly sought-after Dead Reveler.

Let's shift away from Rakdos and look at things from a more controlling perspective for a moment. 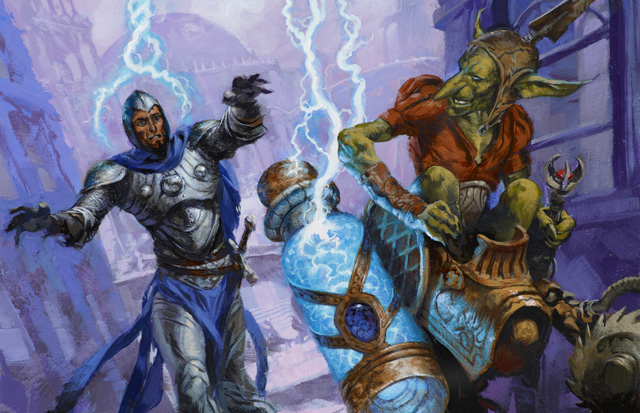 Building a slow, controlling deck that wants nothing more than to extend the length of the game might seem like a good way to utilize your best card... but the reality of the situation tends to be very different from the idealized fantasy.

If you buy a bunch of time but fail to put pressure on your opponent, you shouldn't be surprised when he or she has the removal spell needed to deal with your "game-winning" threat.

Similarly, playing a bunch of expensive cards won't give you a good late game. Rather, loading up on expensive spells will usually just ensure you lose the majority of your games to aggressive decks and leave you hoping your slower opponents don't have any key removal spells they can use to keep you off of your plan.

If you're way behind, it won't matter that the cards in your hand are slightly more powerful than the average card in your opponent's deck.

So, in order to make your late game matters, you need to have a bunch of cards that are reasonably effective early. Some of these cards (e.g., Bloodfray Giant and Dreg Mangler) should be able to act as victory conditions if your opponent is underprepared—or at least as lightning rods that will draw out your opponent's removal spells.

Without these (potentially) efficient threats, your opponent will be under little pressure to waste removal spells early and will ultimately be prepared to deal with whatever late-game creature(s) you might hope to take over with.

If you're playing a control deck, your topdecks need to be consistently better than your opponent's.

So while they play a crucial role in aggressive decks, you can't afford to waste slots on cards like Traitorous Instinct that can only be converted into a finite amount of damage. Finishers like Teleportal and Blustersquall that can immediately end otherwise stalemated games are one thing... but if a card is only likely to turn into 5 or 6 damage, you just can't include it in the main deck of your control deck.

Can Your Deck Win Without Extremely Powerful Rares?

While Rakdos beatdown decks are able to thrive even when they are unaided by any uncommons or rares, the fact of the matter is that powerful rares play a critical role for slower decks in this format.

Notably, I won't play an Izzet control deck, or a four- or five-color control deck, unless I have a powerful rare (or two) and a Thoughtflare.

Without any high-end rares—like Mercurial Chemister; Niv-Mizzet, Dracogenius; or Mizzium Mortars—that I know I want to draw into, it's difficult for me to justify playing a deck that is just going to be slower than what my opponents are going to be bringing to the table.

So while it is technically possible to lock up the board and eventually fly to victory with a Skyline Predator, you should have a very good (rare or mythic rare) reason to intentionally slow your deck down in Return to Ravnica booster drafts.

Now that we've gone over some of the essentials for drafting a successful control deck, what should those control decks ultimately look like?

Making Sure Your Deck Functions Properly

While aggressive decks can always win as long as they have a bunch of cheap creatures, you need a lot more to go right for your control deck to come together.

Your draft deck should have the ability to...

Will your deck always function at its best? Of course not!

But if you're pursuing a deck that requires some really difficult-to-obtain pieces (like bomb rares), you better make sure you have those pieces at the ready before you commit to that strategy.

Because unless your deck has the ability to reliably handle aggressive decks, defuse opposing bombs, and overcome some well-timed removal spells, you're going to have a lot of trouble winning even if your opponent doesn't get off to a great start.

Posted in Limited Information on November 7, 2012