Definition of a Bomb

agic players use a lot of slang words. Sometimes it can sounds like a completely different language, especially to the uninitiated. We throw around all types of words and, as long as everyone is on the same page, we even communicate well sometimes.

One word that is so old now in Magic parlance that it's universally accepted is "bomb." Usually referring to Limited, a bomb is difficult to define. As it turns out, everyone has a different take on it. When I think of a bomb, I think of something explosive and powerful. Keeping it simple, bombs tend to do powerful things.

Cards with immediate impact on the board are eligible for bombhood. Cards that do not are usually not. As with all things ever, there are exceptions. But the cards that I tend to put in that upper echelon—the true bomb category—impact the board right away. And they do it in a big way.

Looking back in time, we see a simpler time for bombs. The first bomb I can think of is Shivan Dragon:

Even though Limited didn't exist when the first Shivan Dragon was opened, it represented a big part of what bombs were to become. It was powerful, difficult to deal with, and ended the game if left unchecked. This is the baseline for bombs of today. The power level has to be there, and a 5/5 with flying fits the bill quite nicely, even today. Shivan Dragon was a great blocker and a great attacker.

Fast forward to a few years ago. The bombs looked similar, but they had changed fundamentally.

I remember the first time I played a Baneslayer Angel in Limited. The card was nearly unbeatable. Also a 5/5 with flying, it boasted a nearly ridiculous box of rules text. It essentially prevented your opponent from attacking, blocking, or racing. It was extraordinarily difficult to deal with in combat, and unless you had the kill spell at the ready, the game slipped away quickly.

A new dawn of bombs was born, but they weren't done yet. 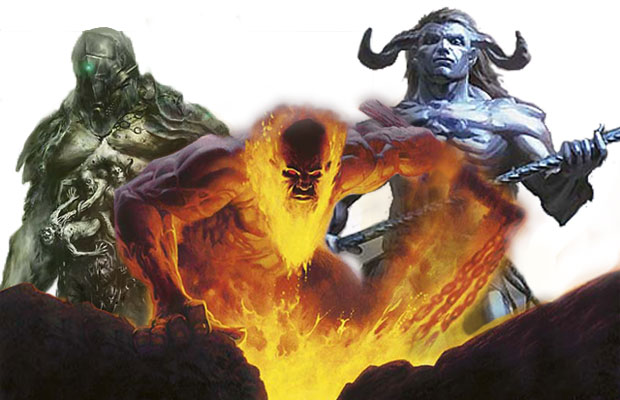 These three Giants represent what I view as the peak of what a bomb can be. They are all monocolored, cost six mana, and are almost unbelievably powerful. What changed that made these so much better than the Baneslayer Angels and Shivan Dragons of the previous world?

The main difference is that if you had a Doom Blade (or Terror, as it were) for the opposing Baneslayer Angel (or Shivan Dragon) you could just kill it. If you were so fortunate, you could get by relatively unscathed, thrilled that the encounter ended with a simple one-for-one.

With the Titans, it's a different story. "Gravy Train" left a couple of stowaways behind, "Big Red" torched one or two of your creatures, and "Frosty the Snowman" made sure that your biggest threat was neutralized for the time being. Oh, and it also made it very cumbersome to actually kill him even if you had the removal in hand.

What it all boiled down to was that even if you had the Doom Blade or comparable removal spell, it often didn't matter. And if you didn't have it? The game was virtually over. These cards represent the truest-form bomb. They were reasonably costed, hard to deal with, had immediate (and often devastating) board impact, and finished the game remarkably quickly if not dealt with right away.

Let's be honest: the actual definition of what a Limited bomb is isn't really that relevant. Everyone will have a different opinion and definition. I have heard some downright mediocre cards called "bombs" after they won a game for their caster. I prefer my true bombs to be game stabilizers and finishers all in one. I know, I ask a lot of my bombs, but I feel like they have to earn the title.

Let's take a look at some of the more powerful cards from Dragon's Maze. Some may even call these cards bombs...

For many of the cards we will talk about here, picking them first won't be in question. You will often take these cards first out of essentially any pack you open. That's good, and that might have even been the definition of bomb to accept. I, however, love to talk about Magic and Limited and all of its myriad intricacies. So we are going to take a more in-depth look at the following bomb candidates.

Ætherling is an interesting one. It costs six mana, is a 4/5 and, is nearly impossible to kill. It's a good blocker and an incredibly potent attacker if its controller has enough mana floating around. For Limited, I view Ætherling as an upgraded Shivan Dragon. I don't think it's as good as the Titans I mentioned earlier, and I'd take Baneslayer Angel over it as well. Still, if you can craft a board state around Ætherling, it will get you the victory.

While not one of the all-time great bombs in Limited history, it will do just fine the next time you open it in Dragon's Maze draft.

Emmara Tandris and Trostani's Summoner are two cards that are a lesson in being open-minded. Rarity is often a factor in deciding what a bomb is and what isn't. Most bombs are either rare or mythic rare—that is just a fact. There are exceptions, though.

Emmara Tandris doesn't fit many of the tenets that I described earlier in the column for what makes a bomb a bomb. When it comes to seven-drops, I approach it like this:

Not every game I play will go long enough for me to get to seven mana. I accept this. My assumption is that I may be under a lot of pressure from my opponent's attackers by the time I finally get to seven mana. Therefore, when I get to that point, I want the spell I cast to help me not die. I want a board stabilizer.

Emmara Tandris rarely does this. Sure, 5/7 is an excellent blocker, but that part is expected. We expect our seven-drops to be huge. I need more.

And I get it from an uncommon? Trostani's Summoner is exactly what I want to do for my seven mana. I get four creatures, totaling 10 power and 10 toughness. I have chump blockers, big blockers, and—eventually—attackers. Facing down some Gore-House Chainwalkers and Splatter Thugs gets a lot less scary when we have a 4/4, 3/3, 2/2, and a 1/1 at our disposal.

Don't let rarity cloud your vision. Just because one is an uncommon and one is a rare, it doesn't prevent the uncommon from regularly outclassing the rare.

Ral Zarekis a Planeswalker, and Planeswalkers hit from a different angle than creatures. When you cast Ral, he doesn't fulfill many of the qualities that we look for in a bomb. He doesn't end the game quickly, his individual effects aren't super powerful, and he doesn't do the best job of stabilizing the board. Even so, he hits from a unique angle and offers unique things that many creature bombs cannot.

Mainly, he is reusable. Even if his abilities aren't on par with what some creatures can do (heck, "attack for 5 in the air" is a pretty sweet ability), he can use them every turn. The key, though, is his "ultimate." If you -7 Ral Zarek and start flipping coins, you are going to be in an excellent position to win the game. That's what sets cards like Ral apart from other value spells. He is working on a goal, and if he gets there, the opponent loses more often than not.

It's not his immediate effect on the board, nor is it the power level of his effects when he uses them, it's that he hits from a completely different angle that makes him special.

Ruric Thar has been impressive the times I have played with and against him. He's a 6/6 with two relevant abilities and one sometimes-relevant drawback. The "must attack" clause would normally turn this bomb from really good to just okay. Once you read that he has vigilance, however, the clause is much less relevant as it's almost impossible to profitably block this particular Ogre. Most of the noncombat ways to kill him will ding the spells' controller for a full 6 damage. This adds up quickly, alongside getting bashed repeatedly for 6 from Ruric himself.

Oh, and he is in the guild that brought us bloodrush. Conveniently not an actual spell, using the bloodrush ability makes double—or even triple—blocking a scary proposition. He does help stabilize the board in a pretty big way as well, thanks to reach. Ruric Thar demands respect, and he gets it from me.

Savageborn Hydra. I love Hydras. Possibly my favorite creature type of all time. Well, those and Jellyfish. And this one is no slouch. I put Savageborn Hydra in its own category: Q&A. It's asking a very pertinent question: Do you have removal?

If the answer is no, this is a one-card wrecking ball. It can win a game on its own, acting as both a threat and a viable mana-sink. If your opponent can't answer this question, you can just dump your mana into the Hydra turn after turn until it overwhelms the opponent. That's a powerful skill to possess.

Still, when you cast it, it's not a very efficient body for the mana. It can also lead to some sticky situations if you put a bunch of mana into it only to have it killed. While I wouldn't classify this as a true bomb, it's one of the more exciting threats out there, and it definitely pulls ahead of the rest of the board if left unchecked.

Everyone has a different definition of what a bomb is. The truth is that it doesn't really matter. Anyone can call any card whatever he or she wants to. My threshold for what I call a true bomb is pretty high; I want a powerful, game-ending, stabilizing card. I will happily first-pick many of these cards, but not every one is what I would consider a bomb.

The key is to pay more attention to why a card is good, not that someone else is saying it's good.