"I don't know how I was ever supposed to beat him. He had Overrun."

ot all cards are created equal. 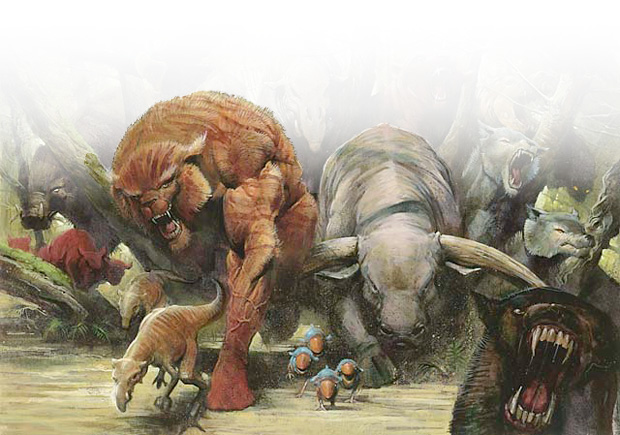 In many formats, I'm more than happy to pay five mana for a 3/2 or a 3/3 flier. There have been plenty of formats where a creature with those kinds of stats was an easy first pick. Air Elemental and Serra Angel are incredibly powerful cards that warrant being picked first in the majority of situations. 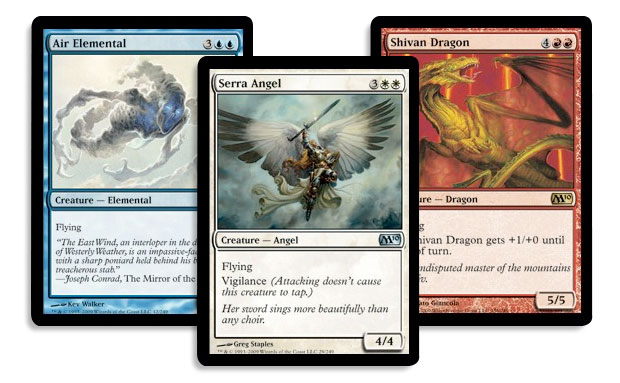 "Jeez, thanks a lot, Steve. If my opponent casts a Baneslayer Angel and I don't have an answer I'm going to lose to it. Got any other trade secrets you want to share with us?"

Just because your opponent has a card or several cards that can take over a game on their own doesn't mean that you have to despair, it just means that you are going to have to make some adjustments to the way that you play.

Make it Quick (If Possible)

If your opponent's deck has Overrun, and you don't have a Cancel, a Safe Passage, or a Fog, then you are probably going to lose if the game devolves into a cluttered stalemate.

It doesn't matter if you are playing a white-blue deck that you thought was going to beat people by stalling up the ground and then flying in for the kill late, late in the game. If your opponent has an Overrun, everything changes.

You are going to have to play aggressively.

When you know that your opponent's deck has a card, or several cards, that you cannot reasonably deal with, you are going to want to try to end the game as quickly as possible. By ending the game quickly, you minimize the chance that your opponent will be able to cast his or her game-breakers.

Admittedly, this is an easier task for some decks than others. And it might turn out that your white-blue deck does not have any profitable ways to get aggressive. In that case you have to play your deck the way it was intended to be played and hope for the best.

Don't Play Around a Bomb if You Can't Afford To

Perhaps the most important thing to keep in mind when dealing with an opponent who has a bomb is not to let the bomb beat you when your opponent hasn't even drawn it.

Your opponent might have an Ant Queen in his or her deck that you absolutely cannot beat if it remains active, but that doesn't mean that you don't want to Deathmark the Stampeding Rhino that he or she cast on turn 5. 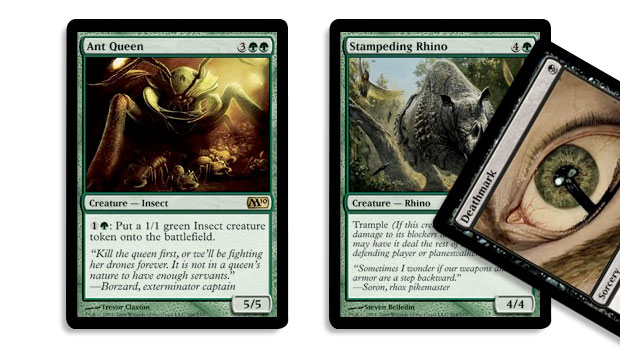 If that Stampeding Rhino is going to clock you over the head for (at least) 8 damage before you can do anything about it, you better just Deathmark it then and there. Sure, your opponent might plop down an Ant Queen on the next turn, but if you were going to lose to the Stampeding Rhino anyway, your cost-benefit doesn't work out at all.

For example, last weekend I was playing Game 3 of a Magic 2010 draft match where I had a very good red-white deck and my opponent had an even better green-blue deck that featured two Overruns!

I had some mana troubles early on that I was eventually able to overcome. I had a couple of good turns in a row after I got to four and then five mana, and it looked like I was about to get the board locked up enough where I would win so long as my opponent did not resolve an Overrun.

I had a Safe Passage in my hand, so things were looking pretty good.

Then my opponent cast a Borderland Ranger to fetch his third green source.

At this point I was dead to an Overrun, so it would make sense to leave up three mana for my Safe Passage.

The problem was, I had cast a Safe Passage in Game 2. So if I tried to leave mana up for Safe Passage at that stage in the game, my opponent was not going to try to Overrun me out, but was instead going to just play out the rest of his hand over the next couple of turns.

If I didn't cast anything I was going to lose to my opponents' creatures regardless of whether or not he had Overrun.

So I bit the bullet and I tapped out for a Siege Mastodon. Sure enough, he had the Overrun and he killed me. And I am 100% sure that I made the right play.

Unless my opponent was holding both Overruns, he would not cast one if he saw that I was leaving up Safe Passage mana. Instead he would have deployed creatures whenever possible and left 3 of my lands locked up for the rest of the game.

Figuring Out When You Can Afford to Play Around Bombs

The fact that my opponent knew that I had Safe Passage in my deck, combined with my early mana problems, meant that leaving three mana up while I had four cards in my hand and had been casting a spell for every turn since I had gotten to four lands, would have been the functional equivalent of physically revealing my Safe Passage to him.

If my opponent hadn't been putting me under active pressure, I could have used that to my advantage and simply waited until I drew three more lands before I cast my Siege Mastodon, leaving up Safe Passage mana for the rest of the game.

I would have done that even if I didn't have a Safe Passage in my hand, because my opponent would have been forced to respect it. 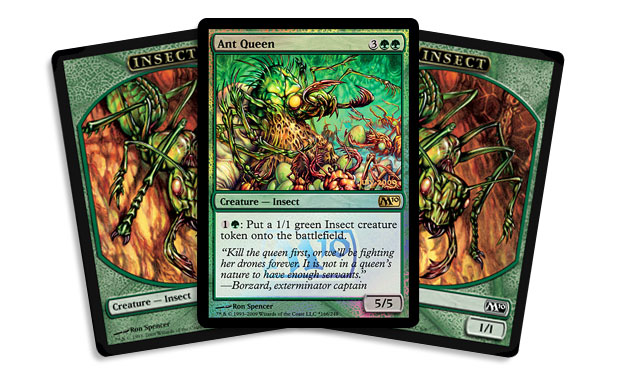 If your opponent does not cast an Ant Queen on his or her next turn, then you might decide to cast your Deathmark on the Stampeding Rhino then, as you would then be facing a completely different situation where the likelihood of your opponent having that bomby green five-drop has gone down significantly.

If you can figure out a way to stay roughly even, or ahead of your opponent while still playing around his or her bomb(s) then you should do so. If the act of attempting to play around those bombs puts you at a distinct disadvantage, then you have to ignore them and hope for the best.

Sometimes playing around bombs might require you to leave yourself particularly vulnerable to less impressive cards. Sometimes it will make sense to do this, but you need to be careful that you aren't letting your fear of a Boogie Man (even if the Boogie Man in question is very real) lead you to make disastrously misinformed plays.

Let's say you're playing a match against someone who has a Shivan Dragon that you have no answer for. It's turn three, your opponent has Mountain, Mountain, Forest untapped and has made no other plays, and you have a Stormfront Pegasus that you are thinking about casting an Oakenform on so you can end the game as quickly as possible. 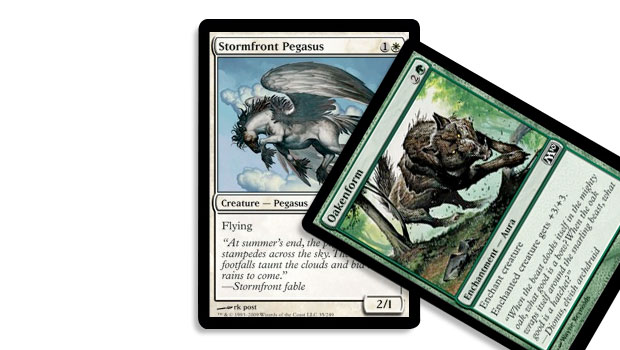 The fact that your opponent did not cast anything on his or her first three turns means your opponent probably has a Seismic Strike, or a Lightning Bolt, or something else that will ruin your day.

If you wait till the next turn (or some turn in the not too distant future), after your opponent has tapped low to cast something, then you can cast your Oakenform and wallop your opponent. However, this is an example where your opponent has given you a lot of information that you can use to help you calculate the riskiness of your play.

However, you will often find yourself in situations where your plays could go either way. Maybe it's turn seven, your opponent (who you know has an Overrun) just Borderland Rangered for his third Forest and you are thinking about whether or not you should go for a Might of Oaks kill that turn. You also know that he has a Lightning Bolt and an Unsummon in his deck, and he has the mana available to cast either of them.

Most of the time in this type of situation I would cast the Might of Oaks. Things get riskier and riskier as the game goes on in this type of situation. If you have the chance to end it right then and there, before your opponent draws a bomb or an answer, then you should probably take that chance—especially if you are still in fairly good shape if your opponent has the answer but does not have the Overrun to kill you.

Drafting to Beat your Opponents' Bombs

If you show up to the table with your grindingly slow control deck, you better have some good answers, or you are just going to lose if your opponent has an Overrun or a Baneslayer Angel, or a Chandra Nalaar, or ... 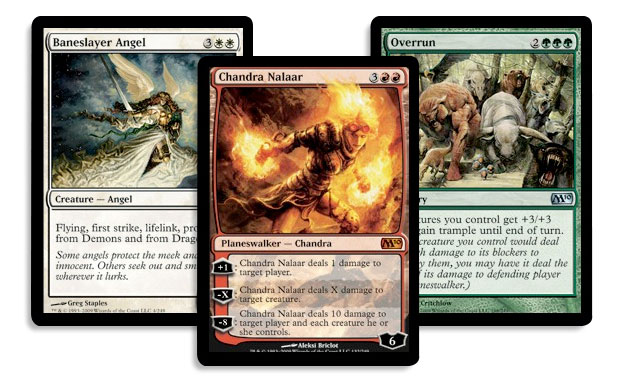 Fortunately, that's a problem that you can address even before you've shuffled up your 40 cards.

If you are drafting a controlling deck, then it is particularly important that you pick up as many answers as possible. This includes the obviously powerful removal spells such as Doom Blade and Pacifism, but it also includes counterspells such as Cancel and disenchants such as Solemn Offering (though your disenchants are probably best left in the sideboard). Because you are planning on playing a long game, your opponent is going to have plenty of time to draw his or her best cards, so you better be ready for them.

But there's another, more dynamic way to combat bombs. And that is to draft as aggressive of a deck as possible.

If your deck is particularly aggressive, then you stand a good chance of beating your opponent before he or she is able to cast his or her best cards. This, in effect, minimizes the effects of your opponent's bombs. 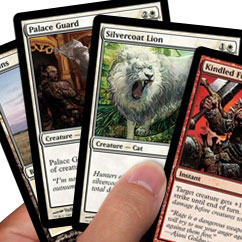 If you are able to supplement an aggressive strategy with some good answers, then you are going to be in pretty good shape even if your opponent has a Baneslayer Angel floating around his or her 40 cards. While that Palace Guard might look appealing, you might actually be better off picking up that Silvercoat Lion, especially if your deck doesn't have too much early pressure.

So, the next time that you are matched up against a bomb, don't complain about how unfortunate you are. Instead, actively try to figure out how you can maximize your chance to win in spite of your opponent's Overrun, or Baneslayer Angel, or ....