Diving into a Shallow Pool

Posted in Limited Information on August 11, 2009

ou sit down to build your Sealed Deck at Grand Prix–Boston, and you are greeted with the following pool.

How do you build this?

The first thing that I do with any Sealed pool is separate out the cards that are essentially unplayable in Limited, such as Mirror of Fate, and the sideboard only cards such as Shatter. 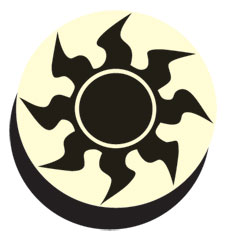 This pool's white is fairly good, but it only has the Stormfront Pegasus and Razorfoot Griffin for notable creatures. The two Pacifisms could make a great splash, but there really isn't enough going on for white to be a main color. 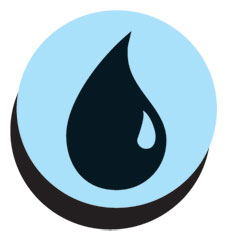 I like having Negate a lot in Magic 2010 Sealed (and in Draft for that matter). There are a lot of very high-impact spells such as Fireball and Overrun that you absolutely have to be able to deal with or you're probably going to lose.

You can deal with them by killing your opponent before they get a chance to beat you with them, or you can stop them outright with cards like Negate, Cancel, or Duress. It's also a very good way to stop cards such as Lightning Bolt or Doom Blade that might otherwise deal with some of your best cards.

In fast formats cards like Negate aren't very impressive because a lot of games will go by when you never get a chance to use them. When you do get a chance to use a card like this, you will end up burying yourself because of all of the time that you lost both leaving mana up for it and casting it instead of an immediately relevant card. But in M10 Limited, games tend to drag on long enough that you will have time to use a Negate to counter something great, or at least something very good.

I should also mention that I'm not a very big fan of Ice Cage in Sealed. I think it's a fairly good card in Draft, but in Sealed the games tend to go on a bit longer. This gives your opponent more time to draw their Giant Growth or stick their Blinding Mage to get rid of your would-be Arrest. 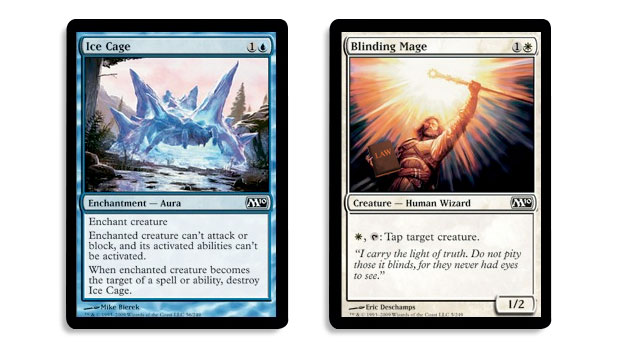 There are also a lot more pieces of Equipment running around in Sealed than in Draft. Not only are there physically twice as many opportunities to get Equipment because you open up six packs per player instead of three, but people are also much more likely to play the Equipment that they do have. Sure you might start a Whispersilk Cloak if you have one in Draft, but a lot of the time you are going to leave it in your sideboard for matchups where you specifically need a way to break through. 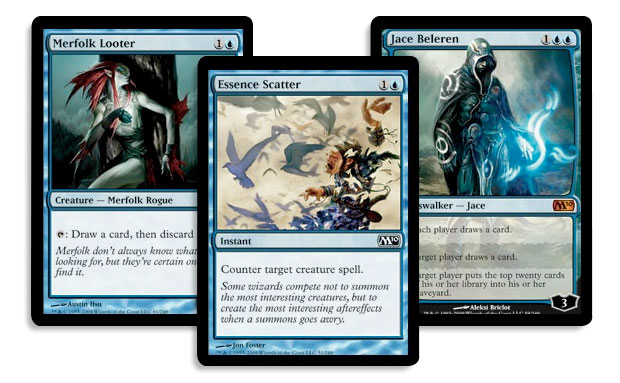 This pool's blue is so close to being good. The Merfolk Looter, the Essence Scatter and the Jace Beleren stand out as the color's best cards, but the supporting cast doesn't have all to much going for it unless it's supporting a deck with very good creatures or some sort of very good controlling plan. 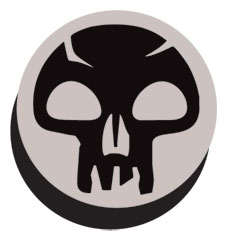 While I think that Duress is a good card for M10 Limited, I removed one because there's no way that I'm going to main-deck three of them unless I am absolutely scraping the bottom of the barrel. 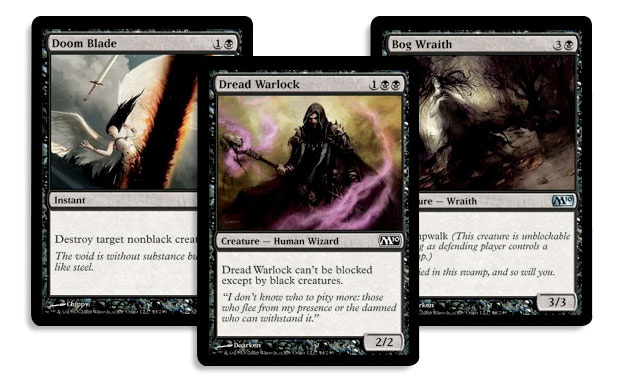 Without the third Duress, black has a total of 19 playable cards. This means that I could be in good shape to get value out of my 2 Tendrils of Corruption and my Looming Shades. Unfortunately, the rest of the black cards, save for the Doom Blade, the Dread Warlock and the 2 Bog Wraiths, aren't particularly impressive.

Because of that, there's an inherent tension within this pool's black cards. The majority of the good black cards are really only good when you play a lot of black. But the black isn't all that good, containing a ton of filler and not very many good creatures.

This guy looks pretty good compared to a lot of what we have to work with. 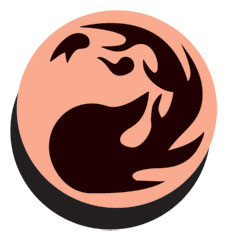 Jackal Familiar, Lava Axe, Panic Attack and Act of Treason are pretty much only playable if your deck is quite aggressive, so those probably aren't going to end up in our deck unless something really weird happens.

I already know that I'm going to end up playing the Lightning Bolt and the Fireball no matter what my other 20-21 spells are, and that's probably going to be about the extent of my red splash (I could also see splashing Shivan Dragon if that was what my pool decktated* me to do) unless I'm playing it alongside black in which case I might also play the Canyon Minotaurs and the Berserkers of Blood Ridge to fill out a two-color deck that takes full advantage of the pool's many Tendrils of Corruption and Looming Shades.

* Definition: decktate, v. When your deck says you should do something. 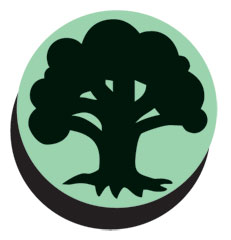 Interestingly enough, every one of the green cards is technically playable, and I have main-decked all of them at least once in the last couple of weeks. That means I'm working with 1 Llanowar Elves, 1 Mold Adder, 1 Elvish Visionary, 1 Runeclaw Bear, 1 Borderland Ranger, 2 Mist Leopard, 1 Prized Unicorn, 1 Kalonian Behemoth, 1 Giant Growth, 1 Naturalize, 1 Nature's Spiral, 1 Regenerate, 2 Oakenform, and 1 Entangling Vines.

I don't really want to main-deck Mold Adder, Naturalize, Nature's Spiral, or Regenerate, but the rest of the cards are quite fine.

The biggest problem with each and every one of the pool's colors is the lack of good creatures.

Right off the bat I removed blue from consideration. Then I tried looking at various green-white-red concoctions, but none of them were very impressive. So I knew that I was going to have to play black. But what color(s) would support it?

I'm a huge fan of the Kalonian Behemoth in Sealed. This might sound a bit extreme, but in this pool I think that I actually prefer it to Shivan Dragon. This pool has very few creatures and the ones that it does have tend to be pretty weak. That means that our opponents are going to be able to save their removal spells for when we play our firebreathing flier. But it doesn't matter if your opponent saves up their removal spells if your game-breaking creature is Kalonian Behemoth. It doesn't matter at all.

For the same reasons why I would prefer to have the Kalonian Behemoth to the Shivan Dragon, the Oakenforms are pretty weak in the context of this pool.

With all that in mind I looked at the following build, black-green splashing red:

2 Zombie Goliath 1 Rise from the Grave

I wanted to fit in a second Mountain, but I didn't feel comfortable going down to 6 Forests and I didn't want to further diminish the power of Looming Shade and Tendrils of Corruption.

This deck appeared very lackluster to me. Its cards aren't particularly good, its curve isn't great and it doesn't have a very good end game. It has a reasonable amount of removal, but it's going to get outclassed by most opponents.

After I looked at this pool, I made a BIG mistake. I decided that the way that I was going to beat my opponents was by getting full value out of my Looming Shades and Tendrils of Corruption.

So I put together the following build:

I decided not to play Gorgon Flail because the deck has very few creatures that you actually benefit from equipping it to. Putting a Gorgon Flail on a Looming Shade, a Zombie Goliath, or a Shivan Dragon doesn't do all that much, meaning that there are really only six creatures in the deck that get a noticeable benefit from the equipment.

This build was wrong for a number of reasons. Due to my lack of experience playing M10 Sealed in tournaments, I thought the format was much slower than it actually is. The Sealed pools that I had opened while I was preparing for the event tended to offer me very controlling decks, and I made a pretty poor leap of logic. I built a deck that needed too much to go right for me to win when there were multiple builds that were actually quite reasonable given the nature of the format.

As it was I only had two spells that affected the board before turn three, and those were Doom Blade and Lightning Bolt—both spells that I would really, really want to save until late in the game. So if my opponent simply played a two-drop and a three-drop, I would be in terrible shape. The deck's creatures and spells weren't particularly powerful either, so I would have a lot of trouble when the game went late too.

And my deck probably needed 18 lands so I could ensure that it could cast its spells, but I didn't have very much action so I decided that it was more important to fit a second Duress into my deck. This was so that I would have a better chance to win if the game went late, because I would have an extra answers to top spells such as Fireball.

This build was without a doubt one of the biggest blunders that I've made in a Sealed Deck tournament in a long time. I visualized myself winning games by casting big Tendrils of Corruptions and attacking with big Looming Shades. But if my opponent got a fast draw, a bomb, or something like a Sleep to break the game open, I was probably going to lose.

Here's the list that I now believe I should have played:

2 Duress 1 Fireball 1 Rise from the Grave

Sure, the Looming Shades and the Tendrils of Corruptions are weaker in this build than they are in the black-red build that I played in the tournament, but the fact that we pick up two Pacifisms and three creatures that cost two or less more than makes up for the loss in power that some of our cards suffer.

I don't like playing 3 Looming Shades in this version as it only has 9 Swamps. I opted to run a Wall of Faith instead so I could have an additional relevant card against five-mana 4/4s and the like.

I'm still not excited about this deck, but it does have a lot of removal, a decent curve, and a legitimate shot at winning. The deck that I piloted had none of these things going for it.

It is your turn.

Your opponent's hand: one unknown card

Your opponent is on 2 life. What do you do?

Your opponent is on 3 life. What do you do?

Your opponent is on 5 life. What do you do?

Your opponent is on 7 life. What do you do?

Your opponent is on 8 life. What do you do?

Your opponent is on 20 life. What do you do?

Posted in Limited Information on August 11, 2009